The only acceptable response to Vladimir Putin

Scott Gilmore: There are a long list of actions Canada can take right now to pressure Putin and help Ukraine. And there are no excuses if it doesn’t act. 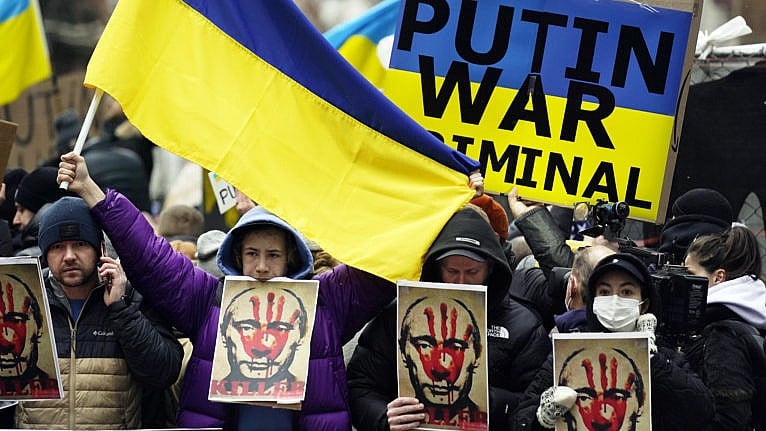 It would be difficult to exaggerate the danger of this moment.

Our modern world is built out of the rubble of the Second World War. That was the last time a European power attempted to violently annex a neighbour. The western world responded to the horrors that followed with a rules-based international system, an over-arching respect for sovereignty, and a strong reliance on collective security. This allowed us to create an unprecedentedly peaceful, interconnected and prosperous world that was unimaginable in the late 1940s—one that lasted generations and ended last night.

Russian President Vladimir Putin, in his pre-invasion address, made it explicitly clear that he intends to make Ukraine a part of Russia. He added a warning to the rest of the world, that attempts to interfere would be met with “consequences you have never seen.”

And so Thursday morning the western world is faced with moving forward along a path that has the precipitous collapse of a stable international order on one side and falling into an open war with an aggressive nuclear power on the other.

It is possible for us to choose our steps wisely and decisively and avoid both. But that will require an extraordinary set of measures, resolve and coordination—all to a degree not previously achieved by either Canada or its allies.

READ: Will Canada help save Ukraine?

The collective goal is to put immediate pressure on one man, Putin, either directly or through his oligarchs, his government or his people.

Putin himself is widely believed to be worth billions of dollars, and those assets are not exclusively in Russia. Unfortunately, just the week before the invasion the life-long civil servant repatriated his $100 million yacht from Germany. But doubtless there are bank accounts, shares and other personal holdings—long tracked by western intelligence agencies—that can be seized overnight.

The oligarchs who surround and support Putin are more vulnerable. Their consumption has long been conspicuous, and it would be relatively easy for NATO countries to seize their villas, penthouses and football teams. None of these can be sailed back to Kaliningrad.

Western nations can also disconnect the Russian economy from the international monetary system, isolating the banks and corporations that fund the oligarchs. Likewise, trade can be slowed down and in many cases stopped entirely.

The Russian government that facilitates Putin’s war is also a readily visible target. Western allies could freeze state funds, and kick them out of international organizations. It would be straightforward to ban the Russian state’s various propaganda arms, such as Russia Today. Countries could, within hours, recall their ambassadors and expel Russia’s. Embassies would stay open, and diplomatic dialogue can still continue, but the spectacle of mass expulsions is one that the Russian people will notice.

And while the Russian people are not to blame for Putin’s war, they must feel the consequences of his actions, too. All visas should be cancelled. Russian students should be sent home. All flights international could be stopped overnight, including all parcel delivery services.

This morning Gary Kasparov, the famous Russian chess grandmaster and long-time Putin critic, argued sanctions against Moscow must also be matched with support for Kyiv. He recommended opening the floodgates for military support to Ukraine, including weapons and intelligence; waiving visa requirements for Ukrainians, and setting up refugee reception centres across the EU.

Canada can play an important part in all of this. There are not many Russian yachts it can seize, but it can offer a home to Ukrainian refugees (now, and not like we did with the Afghans two or three years in the future). Ottawa can apply broad and deep economic sanctions, cancel visas, send more military equipment to Ukraine, and fight hard in every international forum to isolate Russia until it withdraws.

What is required is simply for the Prime Minister to ask the Privy Council Office to prepare a list of immediate measures that can be implemented with existing authority and regulatory powers, including the Canadian Magnistky Act that already enables Canada to target the assets of foreign nationals. Trudeau and his cabinet would only need to meet to approve that list and issue an Order in Council, which is signed by the Governor General, and executed by the various agencies and departments. Wider sanctions would require possible negotiations with opposition parties, and the tabling of legislation.  These would almost certainly be supported by the NDP and pass without trouble.

The choke point for Canada is not legislative or regulatory. Our government has it within its power to do all these things. What is missing is a willingness to take a decision and to do so swiftly.

Faced with this unprecedented crisis Canada needs to do far more than it has ever done before. And it must act with its allies. However, generally and with this government in particular, Canada is not known for moving quickly or meaningfully. If past is prologue then in the coming days our government will tell us it’s complicated, that it is considering a “wide range of measures”, that announcements are coming, and then what eventually trickles out will be half as fast and a quarter as forceful as our allies.

But the invasion of Ukraine presents Ottawa with an opportunity for some redemption. Our Prime Minister could step up and announce an aggressive set of sanctions. He could acknowledge that some of these will hurt our economy, but it is a price Canada must pay to defend its allies and global peace. He could encourage our allies to make similar sacrifices and offer Canada’s help to ease any resulting shortages.

Others are already moving swiftly. A few hours ago Norway boarded and seized an oligarch’s yacht. The Union of European Football Associations cancelled the Champions League final in Moscow. London announced Aerflot flights are banned. And European nations who were just last night lobbying for carve-outs in the EU sanction package have backed away.

This is a once-in-a-century moment and it requires an unprecedented response from this government. Ottawa must fight its long-cultivated instinct to focus on why something can’t be done, and instead argue loudly for why everything should be done. Otherwise, the consequences of failing this test will last for generations.