338Canada: Canadians are overwhelmingly satisfied with their governments' COVID-19 responses

Philippe J. Fournier: Both the provinces and the federal government get high approval ratings, while the Liberals have widened their gap over the CPC 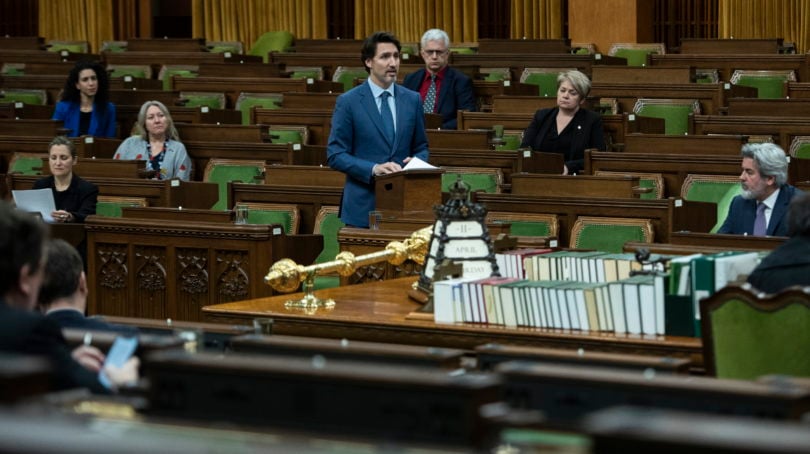 Trudeau rises in the House of Commons to discuss measures related to the COVID-19 pandemic, on April 11, 2020 (CP/Justin Tang)

As part of its weekly pandemic tracking, Léger released its latest round of numbers last week which showed that, while Canadians are increasingly satisfied with the federal government’s handling of the COVID-19 pandemic, premiers across the country get the highest approval marks.

Even when we break down the results by regional subsamples, we do not measure overwhelming variations, aside from Quebec where François Legault’s handling so far is almost unanimous (95 per cent). The lowest score goes to Alberta Premier Jason Kenney (65 per cent), although such an approval rating should be considered as high in any context.

Here are the full results by polling region:

Here are the results from Léger:

In Atlantic Canada, almost nine in 10 Canadians are satisfied with the federal government. In Ontario, British Columbia and the Prairies, three in four are satisfied. And even though overall satisfaction towards the feds is lower in both Alberta and Quebec, still roughly two thirds of voters in those provinces remain satisfied. Considering Léger had the federal Liberals’ satisfaction in Quebec down in the low 40s in early March, it shows Prime Minister Justin Trudeau has recovered in the province’s public eye after a difficult start.

Naturally, when combining higher satisfaction towards the governing Liberals and the CPC leadership race fading out of the recent media cycles, we observe a widening gap between the two main parties’ voting intentions (see list of all federal voting intention polls on this page) with the Liberals climbing to an average of 37 per cent and the Conservatives falling to 30 per cent. Here are the 338Canada vote projections for April 12, 2020:

In late March, EKOS Research Associates measured the Liberals at the 40 per cent mark, 11 points ahead of the CPC. Last week, Innovative Research also had the Liberals at 40 per cent of decided voters, with the CPC 13 points back. The full 338Canada federal projection is available on this page.

Since last fall’s federal election where the Conservatives won the popular vote by one point over the Liberals, both parties had stayed more of less neck and neck in voting intention (see graph below). In the past three weeks however, the Liberals’ generally well received response to the pandemic has given the LPC some breathing room over the CPC:

Regionally, the Liberals have taken a crushing lead in Ontario: the latest polling average has the LPC at 46 per cent, 17 points ahead of the Conservatives. In Québec, the Bloc québécois and the Liberals are statistically tied in the mid 30s. The Liberals remain dominant in Atlantic Canada. the Conservatives still lead in the Prairies and in Alberta.

It certainly isn’t the first time that crisis management has helped the standings of any governing party in public opinion. Naturally, when we are past this pandemic and have the benefit of hindsight, new assessments of the provincial and federal governments’ handling will be made. However, as I have mentioned several times in the past, polls do not predict the future, but rather offer a snapshot in time of a constantly moving target. What we may conclude from current data is that most Canadians are satisfied with their political class—so far.