99 stupid things the government did with your money: Part II

Expensive OJ, sausage research and a report on 'hi' in Quebec 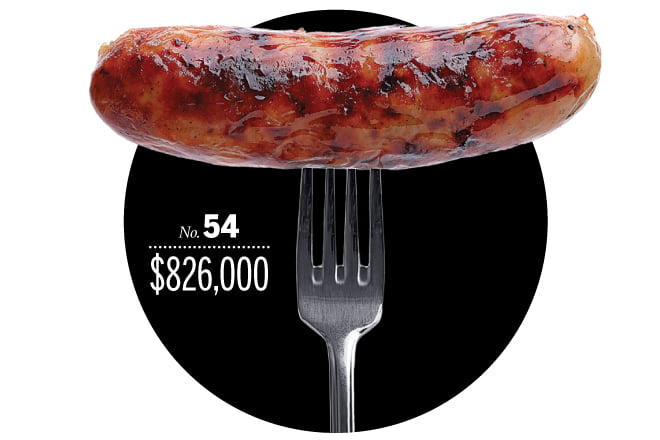 Here are 34 to 66 stupid things on our second annual list of waste that shows spending by all levels of government is still way out of control. Check us out tomorrow to see the last 33 stupid things your government did with your money. (And find 1 to 33 right here.)

34 The Town of Innisfil, Ont., spent four years and $42,000 on outside consultants to design a new logo, even though a local graphic designer offered them a logo she designed for free.

35 Down under: Claude Benoit, CEO for the Old Port of Montreal, billed taxpayers $10,100 for a 29-day trip she took with a friend to Australia and New Zealand, claiming she was working for part of the trip. In 2012 the federal government asked the auditor general to probe Benoit’s spending after a series of unusual bills, including $7,100 for trips to Sweden and Florida and $38,000 for catered meals to the port offices.

36 Vacant splendour: Alberta spent nearly $114,000 on more than a dozen unoccupied rooms at a five-star hotel in London during the Summer Olympic Games. The province had planned to send 47 people to London to promote Alberta tourism, but scaled back, leaving the rooms at the $850-a-night Le Meridien Piccadilly empty.

37 Working holiday: Councillors in Central Saanich, B.C., didn’t think to check on their colleague Terry Siklenka after giving him a six-month paid leave of absence worth $6,000. If they had, they would have learned he was still hard at work—having taken a job on the side in the Cayman Islands. Only after a media uproar ensued was Siklenka forced to resign.

38 Fumble for fame: B.C.’s Liberal Speaker, Bill Barisoff, his deputy, NDP Claire Trevena, and a clerk billed taxpayers to take their spouses on a junket to Africa, with at least one couple travelling business class at a cost of $7,000 each.

Meanwhile: Alberta’s Conservative government dropped $70,000 on a caucus retreat to the luxurious Fairmont Jasper Park Lodge to brainstorm how to trim the province’s $3-billion deficit.(39); Minister of National Revenue Gail Shea and a staffer spent $2,400 to attend a “Tax Savings Day” event in Toronto to promote a previously announced small-business tax credit (40); Statistics Canada had to cover a $4,000 bill for damage caused to a hotel room by a census enumerator (41); three federal departments spent more than $50,000 sending diplomats and bureaucrats to London to learn how to promote the oil sands (42); the Quebec government spent $200,000 for a bash in Paris to celebrate the province’s 50th anniversary of having a delegation in that city (43).

Reports of wasted spending — are in no way exaggerated

44 Hi and dry: Quebec uncovered yet another threat to the French language in that province—the rising scourge of the word “hi.” Quebec’s language police hired a research firm at a cost of $150,000 to dispatch observers into 400 retailers in downtown Montreal in search of language infractions. The report noted a dangerous increase in the use of “bonjour, hi,” from one per cent of salutations two years ago, to 13 per cent.

45 Public lard-caster: The CBC spent $56,000 to survey its own employees in a sole-sourced contract with Phoenix Strategic Partnership. Surprise, surprise: 80 per cent had a positive impression of the CBC and 70 per cent said the public broadcaster succeeded at “enriching democratic life.”

46 Jet lagged: After dissing reports from the auditor general and Parliamentary Budget Office that warned the price of F-35 fighter jets would be far higher than the $16 billion the Harper government promised, the feds shelled out $645,000 for an outside opinion. After paying KPMG to review the defence department numbers, the government finally accepted the price would be $45 billion.

47 Scooped: When the Guelph Mercury reported complaints from two councillors about city staff in the Ontario town, other councillors voted to have the city’s integrity commissioner look into the matter. Three months and $10,500 later, lawyer Robert Swayze submitted his report, stating any violation was inadvertent, prompting one councillor who voted for the investigation to declare it a “complete waste.”

Meanwhile: A year after the city hired an outside firm to complete an efficiency review of the Toronto Police Service at a cost of $249,965, the police services board put out a tender looking for a consulting firm to look for “delayering” opportunities at a cost of $299,000 (48); a $127,000 report Saskatchewan Health had commissioned from Ornge, Ontario’s troubled air ambulance service, turned out to be ghostwritten by a new M.B.A. grad with no industry experience (49).

Food and entertainment — Living it up on government money 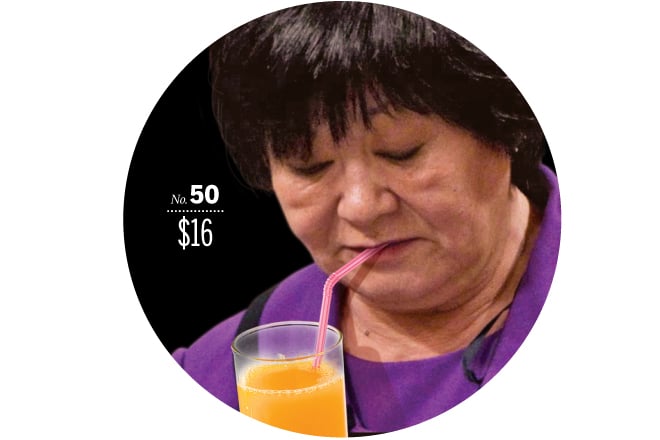 50 Out of juice: Bev Oda proved a glass of juice can end a political career. But the former minister of international co-operation’s taxpayer-funded OJ, which famously cost $16, was only the tastiest of her luxuries. Oda also expensed a $1,000-a-day limo service and a $665-a-night stay at the Savoy hotel in London, only paying the money back after she was exposed.

51 A real hoot: The B.C. ministry of forests plunked down $375 over three separate visits to a Hooters restaurant in Edmonton.

52 Gift wrapped: In an effort to boost morale, the B.C. government has a $1.5-million program called the “recognition cupboard” that encourages employees to select from a wide variety of gifts, all paid for by the government, to give to their co-workers. Among the items employees can give each other on the public dime: Starbucks gift cards, CamelBak water bottles and Mountain Equipment Co-op backpacks.

53 Unhealthy spending: Allaudin Merali, a former CFO with Alberta Health Services, expensed taxpayers for more than $346,000—including $900 spent at a wine store. Merali also expensed $1,750 for repairs to his Mercedes and $2,300 for a new car phone. His punishment? No severance package.

54 Safety Wiener: Agriculture Canada handed $826,000 to Brampton, Ont.’s Cardinal Meat Specialists Ltd. to help the meat-processing company research a sausage that doesn’t burst open when cooked. In a news release, Pierre Lemieux, the parliamentary secretary for agriculture, said a grant to develop a less-explosive sausage was critical to the government’s focus on “jobs, growth, and long-term prosperity.”

Meanwhile: Six months before Alberta’s XL Foods was shut down because of a massive recall of E. coli-tainted meat, the company got a $1.3-million contribution from Ottawa to upgrade its meat-processing facilities (55); The Canada Food Inspection Agency spent $19,900 to ask 1,200 Canadians how to label bottles containing blends of both Canadian and foreign wine—most said “Blended in Canada” (56); Alberta Premier Alison Redford’s sister, Lynn Redford, a health care executive, expensed $3,400 for attending partisan functions (57); Quebec’s state liquor authority, SAQ, paid $24,000 to wine critic James Suckling of Tuscany so he would visit Montreal and review 30 wines, all while denying it gave him any compensation (58).

Weather and Environment — the forecast is for lots of spending

59 Calm down: The City of Waterloo said it plans to spend as much as $90,000 studying whether to erect a wind turbine, despite a 2011 report that showed the city wasn’t windy enough to make the project financially feasible. Regardless of those findings, the federal government gave the city another $63,000 to keep studying its wind turbine project.

60 Walk the talk: In Winnipeg, after a councillor slipped on ice and broke his hip, the city spent $5,000 to help set up a website called Surefoot.org that gives a single general overview of “winter-related walking conditions” for the entire city, from “easy” to “hazardous.” The risk recently: “moderate.”

61 Out of credit: The B.C. Pacific Carbon Trust was set up in 2008 to buy and sell carbon credits with the aim of reducing carbon emissions, but critics say it has mostly served to transfer taxpayer money from schools and hospitals to corporations. Over a year virtually all $14-million worth of credits were purchased by school boards, health authorities and other public agencies. Businesses bought just $54,050 worth. Yet as the Canadian Taxpayers Federation noted, huge companies like Encana, Canfor and Lafarge received an estimated $3 million by reducing carbon emissions and selling credits to the trust.

Meanwhile: The City of Whitehorse and the feds spent $258,000 to figure out a waste-to-energy facility wasn’t economically viable (62); Toronto shelled out $274, 000 to renovate Ted Reeve Community Arena, claiming the retrofits would pay for themselves, when an audit found no energy savings materialized and the arena board repaid just $51,000 of the upfront costs (63).

Nice job — Working for the taxpayer, that is

64 Home alone: Senators who apparently live in the capital full-time are collecting thousands of dollars in living expenses meant to help with the costs of owning a second home in Ottawa. Over the past two years, Mike Duffy, a Conservative senator for P.E.I., has claimed $33,413, even though he spends most of his time at his Ottawa home. Likewise, Liberal Sen. Mac Harb, who has lived in Ottawa since the 1970s, has also received $31,237 while claiming his primary residence is in nearby Pembroke.

65 ‘Cause it hurts: In February, TTC commissioners loyal to Toronto Mayor Rob Ford voted to fire the transit system’s general manager Gary Webster “without cause.” The move triggered two years of severance payments totalling more than $500,000, costing the TTC more than if Webster’s contract had been allowed to expire.

66 Book worm: Barry Holmes, the former CEO of the Greater Victoria Public Library, expensed $132,000 on his corporate credit card over 3½ years, including music downloads and $500 for hemp-based body cream. After leaving his job in Victoria, he took a similar position in Windsor, Ont., where, according to reports, he racked up another $67,000 in credit card charges, including $2,000 for antiques, before quitting.