A battle of wits broke out in this Ontario town. Welcome to the sign wars. 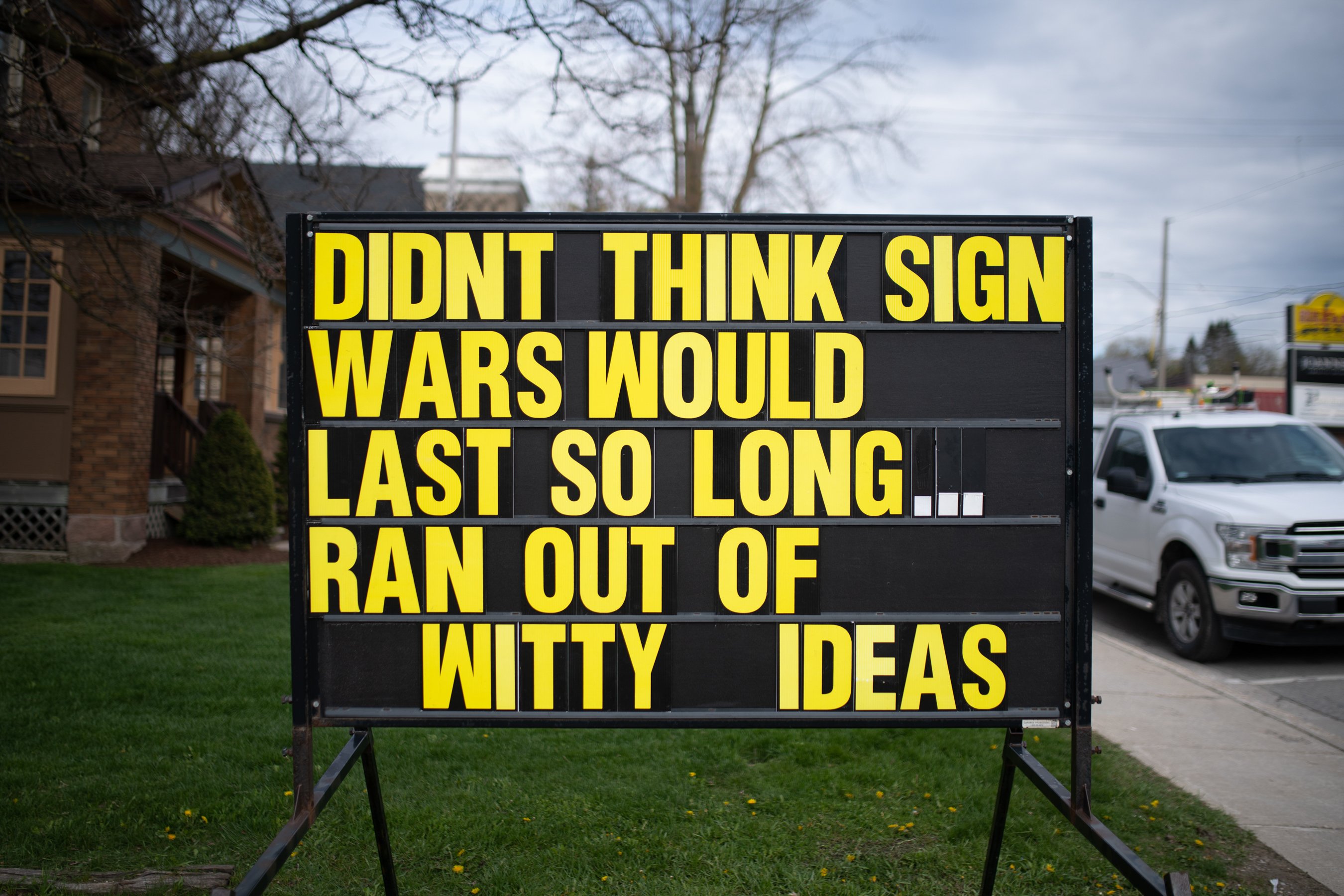 Listowel, ON (Photograph by Jalani Morgan)

What do an auto glass repair shop, a Dairy Queen, a small-town fire department, a Presbyterian church and a Swiss embassy have in common?

Amid all the wartime rhetoric of the pandemic, all have brazenly put themselves on the frontlines of a different sort of fight. A struggle for hearts and minds. A clash of wits. An international pun battle.

It all started on a music store marquee in southwest Virginia. In block letters on the reader board outside its front door, the shop challenged its neighbour, a shoe retailer, to a “sign war.” Super Shoes threw the first punchline in mid-April: “Our shoe strings are stronger than your guitar strings.” Pretty soon, the whole town of Christiansburg, pop. 22,000, was strung along.

Up in Listowel, Ont., a town of 7,500 located about 60 km northwest of Kitchener, Trevor Cork took notice as the #signwar went viral. What better place to tap the trend, he thought, than the quirky town that inspired Letterkenny—an award-winning TV show known for its charming, profane Canadian humour? “Our community is kinda known to be witty and funny,” he says. “So I figured I’d take a stab at it and see what happens.”

On April 26, Cork, who owns the local Speedy Glass repair shop, put up a sign he knew his neighbours would see from their front windows: “Hey DQ, wanna have a sign war?” The ice cream franchise suffered no brain freeze, taking less than half an hour to coolly respond: “You bet your glass we do.”

Amy Hamilton, the DQ owner, says a customer was responsible for that first zinger. “She had a great comeback. So how could we not?”

It wasn’t long before first responders got involved. “Hey Speedy Glass & DQ, if this thing gets any hotter we’ll be ready with hoses & water,” read a sign posted outside the Listowel station of the North Perth Fire Department, about a four-minute drive away.

The thing spread like wildfire. Enter the Royal Canadian Legion, sports stores, restaurants and the Listowel agricultural society. Paper signs in shop windows. Stickers on the sides of vans. The Atwood Presbyterian Church, with: “Hey DQ, our Sundays are the best.” A restaurant called Diana Sweets, with: “How to win #signwars: WE HAVE BACON.” The Swiss embassy, all the way up in Ottawa, with: “We’re in! #signwar Can’t be neutral on fun!”

Over in Virginia, a Japanese eatery called Kabuki called out to Listowel: “Canadians tryin 2 join the sign war ehh? Yall ride on elks for Uber right . . . bring it on, Ontario!” Cork and Hamilton rolled with it. “Hey Kabuki, gloves are off. No more Mr. Rice Guy” went up at the Speedy. At the Dairy Queen: “Hey Virginia, you may have Kabuki, but we have Suzuki eh!” (Referring to scientist and environmental activist David Suzuki.)

“My brain’s getting mushy,” Cork says toward the end of May. With hundreds of businesses in Listowel and nearby towns in on the fun, he’s still cooking up new one-liners every day with the help of his wife and staff. The day I call, his sign says “We have the finest piece of glass in town” on one side, and features a shout-out to the local Toastmasters group on the other: “Hey Toastmasters, you may be good at public speaking but can you do it in sign language?”

Asked to pick out one of his favourites from the past month, Cork recites from memory his rebuttal to a taco joint: “Holy guacamole, this blew up like my glass after Taco Tuesday.” Then he can’t help but laugh. He still gets a kick out of it.

Hamilton can’t believe the blizzard of goodwill her neighbour got going. On some days, before the DQ opens in the morning, customers are outside waiting, taking pictures of the signs. “Who would’ve thought? It just blows my mind every day,” she says. But the credit, she adds, belongs with Cork. “He started this. It’s amazing. It’s brought smiles and excitement to the town. And that’s all Trevor.”

She’s not the only one tipping the hat. People have started to stop by the Speedy just to say thank you. And some 5,000 Facebook users have joined a group celebrating the “Perth County Sign Wars”—mirroring a similar group of about 30,000 in Christiansburg. Cork says he hasn’t seen a single negative comment.

“We’re still in lockdown, and it’s just depressing, so it’s giving people a little bit of an outlet to express themselves and just to smile a bit,” he says, adding that everyone else in the community deserves kudos for keeping it going. “It’s bigger than just me, and it’s still going strong.” 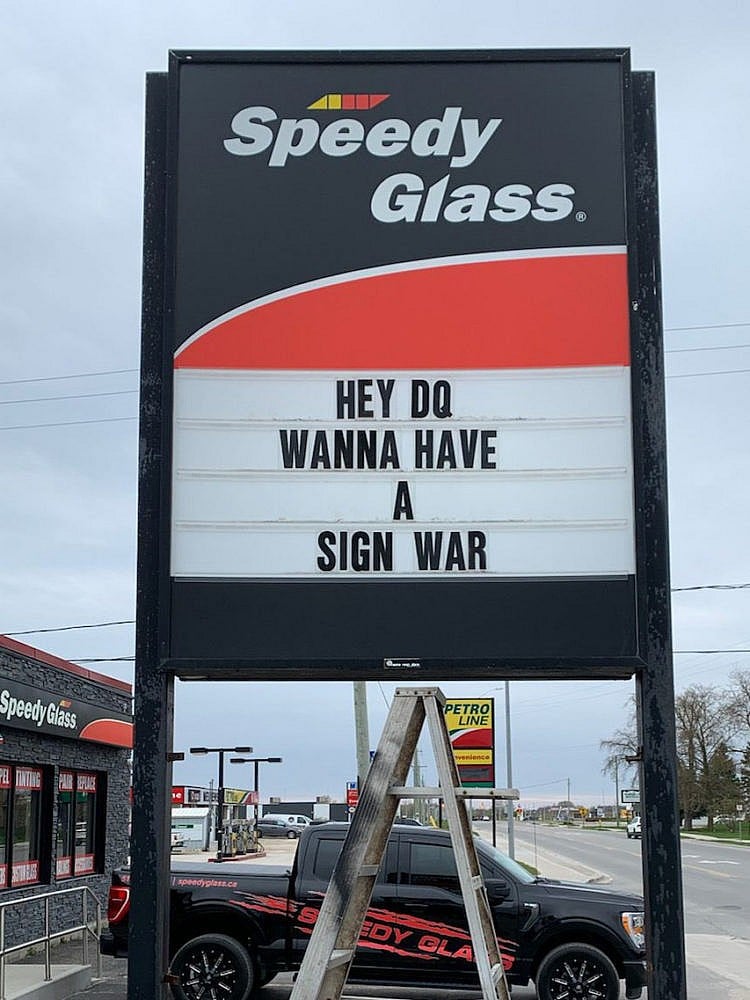 This article appears in print in the July 2021 issue of Maclean’s magazine with the headline, “War of the words.” Subscribe to the monthly print magazine here.