A brave new world of policy in British Columbia

With the NDP and Greens set to defeat Christy Clark when the legislature sits in June, B.C. prepares for a major legislative shakeup 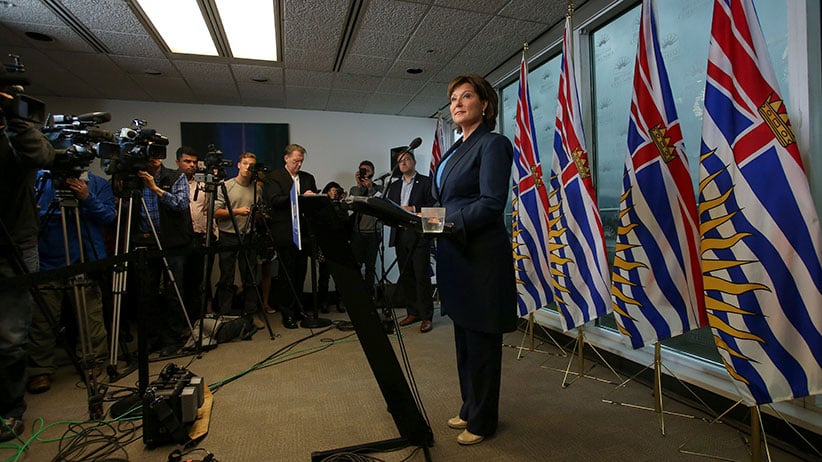 It has been weeks since British Columbians elected a plurality of Liberals to the provincial legislature—and weeks since speculation about whether Liberal Premier Christy Clark could command the confidence of enough members of the Legislative Assembly to continue governing. Those of us here and many more outside the province have been subjected to incessant Weaver Watch—inordinate amounts of attention focused on B.C. Green Party leader Andrew Weaver, who holds the balance of power and will (presumably) determine who gets to govern. As an occupational hazard, I’ve been as guilty of Weaver Watching as any, but now that the NDP and Greens have announced a deal that would allow the former to govern—a deal which is very likely going to make John Horgan premier in June or July—we can begin to focus more on policy and less on what seems like the longest, worst episode of The Bachelor in human history.

So, what’s the headline here? In short, B.C. is about to trade years of focus on tax cuts, energy projects, and fiscal-discipline-first for a new focus on affordability, ambitious environmental stewardship, and structural reform to how politics is practiced in the province. Well, in theory, anyway.

MORE: Why the B.C. Green Party should be wary of a coalition

During their 16 years in power, the B.C. Liberals have billed themselves first and foremost as careful stewards of the province’s economy. They’ve managed to deliver steady growth and balanced budgets in that time, and indeed the province has led Canada in economic growth during the past two years (though we’re expected to slip in 2017). Regardless of how we do, the distribution of riches in B.C. isn’t equitable. Critics have pointed out that social and disability assistance rates in the province have left some of the most vulnerably British Columbians at risk during the Liberal years. At the same time, B.C. has the second highest poverty rate in Canada and there are widespread concerns about the out-of-control housing market in parts of the province (especially the Lower Mainland). Residents also routinely complain about hydro rates and medical services premiums (MSP).

The NDP and Greens intend to tackle affordability issues by studying “a pathway” to a $15 minimum wage, by eliminating MSP, and by addressing rampant real estate speculation in the province. During the campaign, the NDP also promised $10-a-day daycare; in yesterday’s agreement, the parties agreed to “work toward more affordable child care” and to “improve quality and spaces.” (Again, more details to come, which is fair enough.) These moves (except addressing MSP and, daycare, sort of) stand in contrast to the Liberal platform, which focused on tax cuts and balancing the budget (more specifically, tax cuts to the middle class, cutting the small business tax, and freezing personal income tax.). Naturally, ambitious spending promises raise the question of how programs and commitments will be paid for and by whom—but, of course, those details are to come (feel free to raise an eyebrow). If he becomes premier (that is, when he does), John Horgan must table a budget, and that means he’ll have to include a detailed plan for how he is going to pay for the many promises he and Weaver have made to voters.

On environmental issues, both the Greens and the NDP oppose the Kinder Morgan pipeline (though Horgan spoke little about the pipeline during the election), while the Liberals supported its construction after Clark’s “five conditions” were met. The NDP and the Greens have suggested that they will use “every tool” at their disposal to fight the pipeline and will also refer the controversial Site C hydroelectric dam project to the BC Utilities Commission (as construction continues). While one might expect either Kinder Morgan or Site C to end up on the cutting-room floor, it seems unlikely that both will. Other energy projects are also at risk, though, especially since Weaver is aggressively opposed to liquefied natural gas development in the province.

MORE: What the BC Greens-NDP deal means for the rest of Canada

While the Liberals had planned on modest and delayed increases (starting in 2021) to the province’s carbon tax, the NDP and Greens have agreed to increase the tax, currently at $30 per tonne, by $5 a year as of spring 2018, returning some of the proceeds to British Columbians through rebate cheques. The federal government has mandated that each province is required to meet their $50-a-tonne target by 2022, which B.C. would reach in 2021 under the NDP/Green Party plan. British Columbia has long been a leader in Canada on pricing carbon and the province could push past the federally mandated tonnage rate after 2021 in order to keep leading on environmental stewardship since there is no cap under the NDP/Green plan on how high the tax can go.

Finally, British Columbians should expect to see structural changes to how politics is done in the “Wild West.” Both the Greens and the NDP ran on electoral reform, advocating for proportional representation (PR). Horgan insisted on a referendum before adopting PR, while Weaver suggested that a post-hoc vote after trying a new system out would be sufficient. Horgan won the day, and the parties agreed to (likely) hold a vote on changing the electoral system concurrently with the 2018 municipal elections (thereby ensuring at least anemic turnout in the 30 percent range for the referendum, given that turnout in local elections tends to be low). British Columbians have danced the PR jig twice since the 2000s, rejecting it in 2005 and 2009; it won 57.7 per cent support in 2005, just short of the 60-per-cent threshold to pass set by then-Premier Gordon Campbell, and 39 percent in 2009. It appears we shall dance again.

There will also be changes to political fundraising in B.C. with a deal to ban corporate and union donations to political parties, as well as contributions from non-residents of the province, which somehow have been perfectly legal and unrestricted to this point. Unsurprisingly, there will be limits placed on individual donations, too. The Liberals had indicated their interest in studying the matter and assigning a commission to recommend changes, but the fact they raised twice as much as the NDP heading into the 2017 election gave some indication of where their priorities were. These changes to political fundraising would put B.C. in line with emerging norms on party financing across Canada—at last.

MORE: What happens next in B.C.

So, what does this all mean? If Horgan and Weaver defeat Clark in the legislature in June—which they will—and the NDP forms government in B.C.—which they will—the policy landscape will dramatically change after 16 years of Liberal government. The deal put forward by the NDP and the Greens is ambitious and bold, and will surely test the limits of a precarious minority government, not to mention the province’s coffers and the pocketbooks of its taxpayers. Yet even as the spectre of several uncertainties and another election in the not-so-distant future haunts present celebrations and ambitions—this government is not going to last four years, despite promises from Horgan and Weaver—British Columbians have plenty to be excited about as a new agenda centred on affordability, environmental leadership, and political renewal takes the stage.