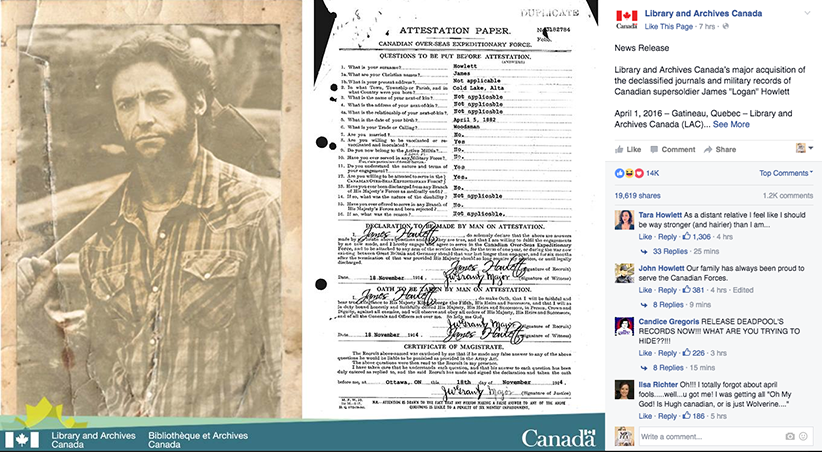 “Breakfast is served here at the main table between 7:30 and 10:30,” explains Conservative leader Rona Ambrose in a video tour for Stornoway, the residence of the leader of the official Opposition. “This is the room we’re listing on AirBnb. We’re hoping it’s going to help pay off the Liberal deficit.”

Here’s a video tour of where you could stay on your next trip to Ottawa. Book now @airbnb: https://t.co/jLYPtFJwbNhttps://t.co/3yu5r0kbPf

This April 1st, Ambrose wasn’t the only politician kidding around. Thomas Mulcair tweeted a photo of himself lathered up in shaving cream, ready to get rid of a beard that has been part of his identity since he was a teenager. “YOLO,” read the hashtag.

Meanwhile, Catherine McKenna declared she was replacing the lawnmowers on Parliament Hill with “environmentally friendly goats.”

Down the street from Parliament Hill, mischievous librarians at Library and Archives Canada (LAC) staged a fake acquisition of records from X-Men’s Wolverine. “His military career spanned multiple conflicts,” reads a Facebook post by the LAC, “making his personnel records an unprecedented study in Canadian military history.”

Posted by Library and Archives Canada on Friday, April 1, 2016

At other levels of government, politicians have long been training their funny bones. In 2014, Rob and Doug Ford said they would play a prank on Mayor John Tory as a welcoming gift into office, perhaps by “leaving LRTs all over the place.” When Rob won the mayoralty in 2010, former mayor David Miller left gravy packets in the office to make fun of him for being on the “gravy train.” Last April Fool’s, the Toronto Health Board read out a false list of speakers at a board meeting, introducing names like “Ayma-moron,” “Isaac Cox” and “Anita Hoare.”

Pranks have also come from constituents; in July, two teenagers in Rothesay, N.B., mailed dead fish to their councillor (the RCMP ordered them to apologize), and in 2009, the son of a member of Parliament in British Columbia mooned the audience at his graduation ceremony. Canadian political jokes have even spread to the United States; in 2000, Rick Mercer pulled a prank on George W. Bush, where he asked a question about his relations with “Prime Minister Jean Poutine.” Bush didn’t catch the reference and replied, “he understands that I want to make sure … we’ll work closely together.” Mercer admitted that Bush was probably distracted.