A century after the Halifax explosion, grim reminders can still be found in trees

The entire core of one tree trunk was a column of metal shards. 'It dawned on me, ‘wow, man, this is from the Halifax Explosion,' ' says one arborist. 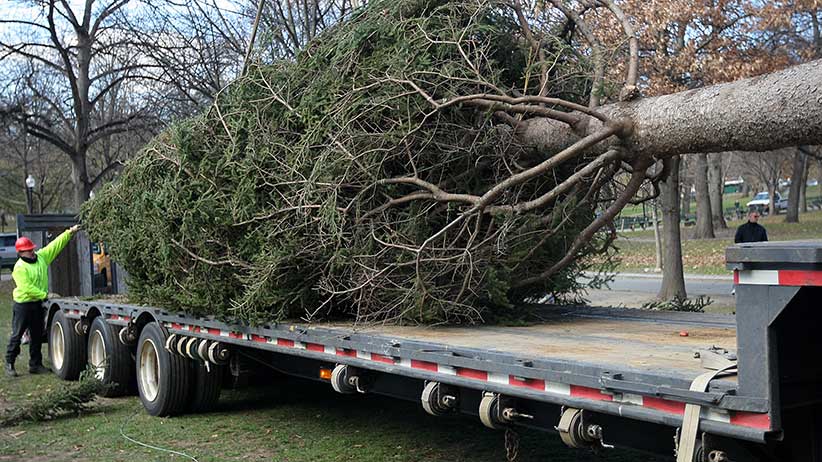 In a bucket lift, in branches, an arborist slit into a trunk with his chainsaw. He did not find wood inside. The sky was getting dark as the silver maple began to spark.

“Man, what is in this tree?” Clarence Talbot said to his three crew mates on the ground. “It looked like someone took a big handful of debris and stuck it in the middle of the tree.”

Talbot did not find a clothesline pulley, as often engulfed by a tree, nor did he find staples nor nails nor a portion of a backyard fence. Rooted into Albert Street in the north end of Halifax, this tree contained none of the usual manmade intruders.

“There was no way any activity in the last 10 or 20 years would’ve put that in the tree,” Talbot says, noting the entire core of the trunk was a column of metal shards. “It dawned on me, ‘wow, man, this is from the Halifax Explosion.’”

READ: The Halifax explosion: How newspapers covered the tragedy in 1917

One hundred years after the detonation, Halifax trees are notoriously impure. On Dec. 6, 1917, a French ship containing nitroglycerine and trinitrotoluene (TNT), among other explosives, collided with a Norwegian vessel in the Halifax Harbour, and many of the 2,000 victims were killed by debris. Shards of unidentified flying objects also got lodged into the city’s canopy, and today, lumber mills as far as the southern United States still don’t dare touch logs from Halifax, knowing some hidden metal artifact could wreck their machinery. By the time of the disaster’s centennial, few human survivors remain to tell their stories, but the oldest trees of Halifax were there, and they have lived to preserve a secret arboreal museum.

“There are maybe two, three types of trees that would survive what I would call a nuclear explosion,” says Talbot. He names poplars and possibly willows, but certainly sugar maples, as their brittle wood and fast growth heighten their “survivability.” 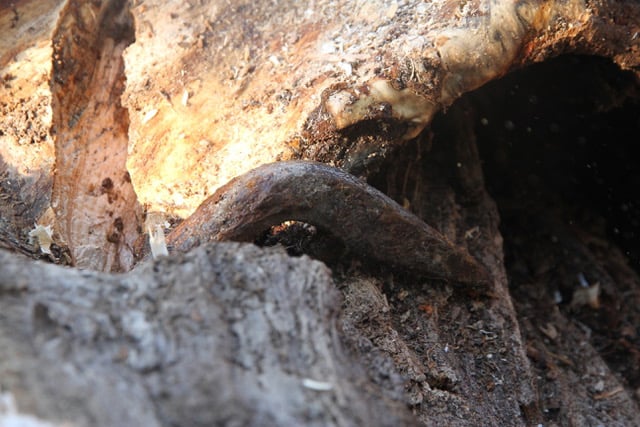 “The Germans have got us!” assumed locals who were not immediately knocked unconscious and killed. The Germans did not have them, but windows shot into eyeballs in the largest mass blinding in history; oil rained in the plum black sky; within 10 seconds a sugary refinery was ablaze, and 20,000 people were homeless, others with limbs dangling by threads of skin in injuries causing Robert Borden, soon to be re-elected prime minister,* to visit the hospital and cry.

Homes and infrastructure suffered damage costing $35 million at the time, and trees were among the only fixtures sturdy enough to last the blast. A piano fell through a floor; a bank vault slammed and locked a man inside to die, and as reported by Grattan O’Leary in the aftermath, “some of the smaller homes not only collapsed, they were simply blown away, and three miles of desert were created in the twinkling of an eye.”

READ: In 2017, Halifax marks 100 years since its greatest disaster

A tsunami followed. The blast propelled an eight-foot wave at the peninsula. If it didn’t eliminate the remaining structures, the next day brought a blizzard.

Remnants were preserved in non-arboreal forms, such as one Lottie Duggan who removed pieces of glass and wood from her face and neck for the remainder of her life, according to Curse of the Narrows by Laura Mac Donald. “It would start as a bump or a black spot,” writes Mac Donald, “and slowly work its way to the surface until it expelled itself.”

On the south side of the clocktower of Halifax City Hall, the hands are still frozen at 35 seconds past 9:04 a.m., the time of the explosion, and the waterfront holds a slab of the anchor of the Mont-Blanc, the ship that was carrying 20 barrels of explosive material precariously strapped down by men in canvas slippers, with a captain unexperienced in transporting explosives, and without flying a red flag to signal its explosive potential. In the Halifax Harbour, the boat zigzagged in confusion with Norway’s Imo, before the two ships collided (“What the deuce are they trying to do?” wondered one eye witness who watched the ships switch from Starboard to Port. Then a bedroom bureau fell on the witness, and all was black.)

Yet, Halifax arborists remain the unknown artifact curators. “With all that metal and debris flying through the air, and with trees being soft, it just got embedded,” says David Barry, an arborist and wood worker who makes salad bowls, cutting boards and dining tables out of old Halifax trees, leaving the debris in his creations. “When the saw starts to bump, you know you hit metal … You hit something and you know it’s not a nail or a screw. It’s actually something substantial.” Barry recalls a friend sawing into a lump of metal so large the wood was useless, but he instead used the findings to build a fireplace.

Elms, oaks and other hardwood trees normally make valuable lumber, but after Hurricane Juan hit the city in 2003, the city couldn’t sell the wood, not even in the United States. Part of the problem was an infestation of brown spruce long-horned beetles in Halifax, but mills could also have their blades ruined with century-old matter.

WATCH: One of the Halifax Explosion’s last survivors on that fateful day

Americans know the explosion story so well because they were the first responders, especially Bostonians. “News of the catastrophe had barely reached the consciousness of the outside world,” reported The Journal days later, “when Halifax was literally invaded by Americans—American doctors, American nurses, American Red Cross workers, American engineers and American architects. How they managed to get such a start on everybody else, can only be explained by an enthusiasm and a dash absolutely contemptuous of details and intolerant of delays.”

As workers rebuilt Halifax, the trees had to survive the fate of being used for lumber or burned for wood during an exceptionally cold winter. The tree on Albert Street was likely one such survivor, although Talbot didn’t keep the remnants inside to verify if they were from the explosion because his brother borrowed his trailer and accidentally disposed of them at the dump. “Aw man, I need that stuff,” he thought at the time. “Some day, somebody’s going to ask me about this.”

On contract with the Metropolitan Regional Housing Authority, Talbot only cut down the tree as a last resort because it risked falling down or falling sick to a pest. “We’re not tree cutters; we’re arborists. In Europe they’d consider us surgeons—tree surgeons,” he says. When people ask him to remove a tree, he says, “I don’t want to get too emotional about this, but what gives you the right to cut down this tree that’s going to outlive you and maybe your grandkids?” He explains, “It’s part of history. It’s part of the city. It’s part of the landscape.”

And trees are part of commemorating the disaster. Each December, to say thank you for the aid after the explosion, Halifax sends Boston a Christmas tree.

CORRECTION, Dec. 6, 2017: This post originally stated that Robert Borden became prime minister soon after the Halifax explosion. In fact, he was reelected that year.

SEE: Photos of the devastation after the Halifax explosion