A day in the life of Donald Trump 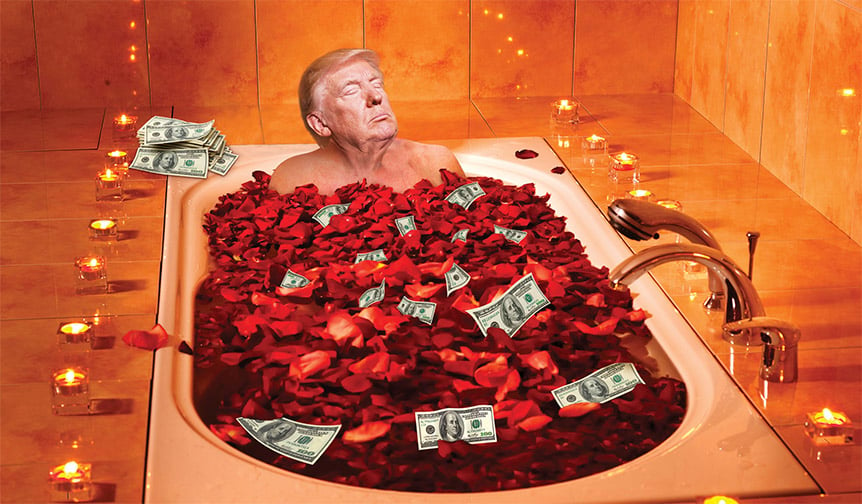 The White House of Donald Trump may appear chaotic, but the President actually adheres to a rigid daily schedule. Here, for instance, is Tuesday’s itinerary:

6:00 a.m. The President is awakened in the usual manner—by the ping of a news alert from Infowars alleging that UFOs are helping the Democrats colonize Mars with gay moon babies.

6:05 He flips on a bank of televisions tuned to Fox News, CNN and MSNBC. Scans email for any hits on his Google News alert for “Trump greatest president largest hands.”

6:15 Morning workout. An illegal immigrant caught working in the White House kitchen walks briskly on a treadmill while wearing the President’s FitBit.

6:35 Trump performs the main elements of his morning ritual:

7:15 The President’s hair is lowered onto his head pretty much exactly like in that scene with Darth Vader’s helmet.

8:00 Trump arrives in Oval Office for a meeting with his scheduling secretary. Kinda zones out for it, to be honest.

9:15 Daily “intelligence briefing.” (i.e. The President scrolls through Breitbart News while on the can.)

11:30 Fires off eight grammatically dubious tweets about Barack Obama. Crudely attaches his phone to his belt using string and chewing gum so this time Jared can’t take it away.

11:45 Situation Room. High-level operatives from the Office of the Director of National Intelligence gather to respond to the President’s question: “Which one’s Yemen?”

12:15 p.m. Intensive 90-minute working lunch during which Trump brings together some of the nation’s top tech minds and together they drill down into the data so they can help ordinary Americans understand just how bad Schwarzenegger’s Apprentice ratings were.

2:25 Pretends to power nap so he doesn’t have to talk to Ben Carson.

2:30 Gets bored of being President. Conducts impromptu Oval Office beauty pageant among female assistants, custodial staff and his right hand, on which he draws a pair of eyes and two pouty lips.

2:45 Receives daily fist bump emoji from Putin. Smiles for the next 20 minutes.

3:15 The President summons top officials from the American national security apparatus to the Oval Office to remind them that his daughter Ivanka is “very attractive, a great beauty.”

3:30 Scheduled period of tension release. The President throws darts at a photo of Obama that hangs on the back of the Oval Office door. Medical staff on call in case he misses and hits Reince Priebus (again).

3:45 Meets with his sons Don and Eric but definitely not about Trump family business (wink).

3:55 Reminds secretary not to type the “wink” part onto the schedule next time.

4:00 Flies to Mar-A-Lago and back at massive taxpayer expense because: enchilada night.

10:15 Trump takes a luxurious bath in a tub filled with rose petals, $100 bills and three drops from what his staff tells him is a vial of the tears of Hillary Clinton.