A gift fit for a king 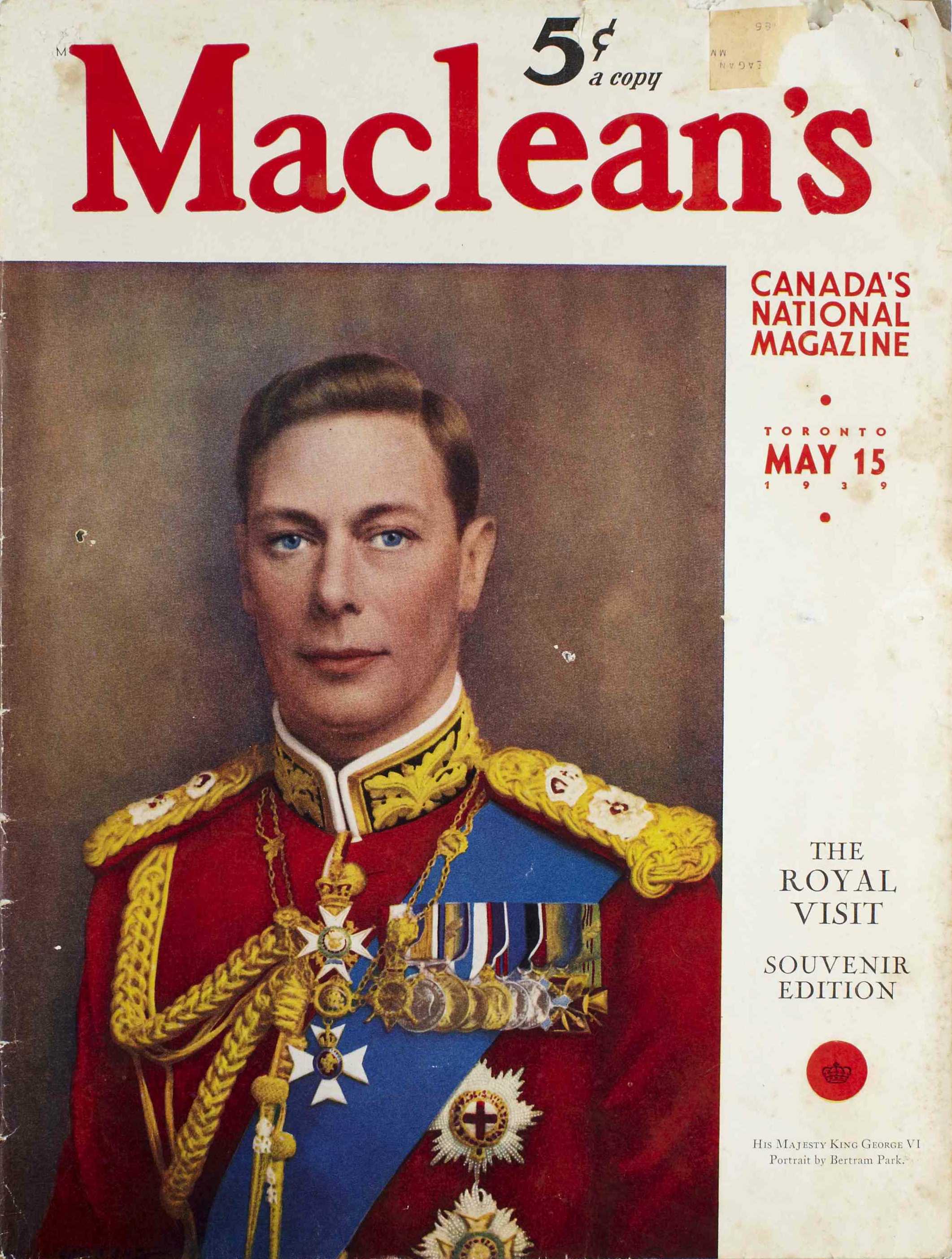 All in all, it does make a charming souvenir gift. Just ask the Prime Minister. A copy of Maclean’s May 15, 1939, souvenir edition of the 27-day royal visit made by King George VI and his consort Queen Elizabeth—Prince William’s great-grandparents—formed part of a personal gift from Stephen Harper and his wife, Laureen, to the prince and his wife, Kate, on the occasion of their current visit to Canada. (The gift also included a copy of Chatelaine of similar vintage.) The 1939 royal tour of Canada, the first ever visit of a reigning monarch to the Crown’s senior dominion, was like no other royal visit before it, and Maclean’s, naturally, treated it as such.

In many ways the souvenir issue, with the king’s portrait on its cover, set the template for the magazine’s coverage of royal visits ever since. That included printing the Queen’s portrait first, on the cover of the otherwise business-as-usual May 1 issue: early recognition that the royal women, whether as rulers or consorts, from Elizabeth II to Diana, princess of Wales to Catherine, duchess of Cambridge, have always been the stars of the show. Photos were a huge part of the special edition, including a shot of the two royal children, who had been left at home for this arduous cross-continental odyssey: princesses Elizabeth and Margaret Rose, seated at a piano.

But it wasn’t just that George VI was a reigning king that infused his arrival with historical significance, but rather how—by what right—he was reigning over us. In 1937, King George, the first monarch crowned since the 1931 Statute of Westminster established the full independence of the self-governing dominions, was also the first to swear in his coronation oath to govern Canada by its own laws and customs. The monarchy was now the final institutional glue holding the Empire (soon to be Commonwealth) together. Although not yet formally king of Canada—that legal change in title didn’t occur until his daughter’s reign—George was very much coming to his dominion in that capacity. The tour marked another step, both real and symbolic, on the long road to equality between motherland and former colony that had, so far, stretched from the Canadian Corps’ victory at Vimy Ridge in 1917 through Canada’s seat at the Versailles peace treaty negotiations two years later and the Westminster statute and the coronation oath.

During the tour, constitutional and political precedents were set almost daily. The king brought no British ministers with him, for in his realm of Canada it was appropriate for Canadian ministers only to advise him; and, according to archivist Gustave Lanctot (the tour’s official historian), when the king, having stood to attention for the playing of God Save the King at the unveiling of the National War Memorial in Ottawa, stayed at the salute for the singing of O Canada, he effectively turned a popular patriotic song into the national anthem. On the same occasion, the queen too made history, initiating the first royal walkabout by mingling with the 7,000 Great War veterans present.

This ongoing constitutional transformation, and its implications for the larger geopolitical significance of the tour, were much on the minds of Maclean’s writers. The unsigned editorial, primarily concerned with trumpeting Canadian achievements, included oblique references to the international situation, less than four months before the Second World War would begin. The king, the magazine declared, ruled his Canadian dominion “not by force of arms or dictatorship, but because of what he represents—the ideals of freedom and justice, of government by the people.” Michael Grattan O’Leary, who later became an eminent senator, was more explicit in his lengthy column. “Throughout most of the earth today, the lamps of democracy are going out. The truth is that in a world of unrest, in a veritable sea of hate and racial and religious bigotry, the British Empire stands as a beacon of hope.”

The magazine was, in effect, offering an answer to what had become the burning question of the royal tour from the British side: now that Canada no longer went to war automatically with the motherland, what would the senior dominion choose to do if—when—Britain clashed with Nazi Germany? Willingly join in, was the answer from both Maclean’s and the enthusiastic crowds greeting their sovereign.

Neither the tour nor the Maclean’s coverage was all high politics and constitutional niceties, of course. Their majesties found time to meet their only Canadian rivals for celebrity, the Dionne quintuplets, a few days before the children’s fifth birthday. The magazine had articles about the luxuriousness of the royal train, just who would be seated (and in what order) at official banquets, and how every fashion designer in North America had someone, armed with pencil and sketchbook, following the queen from the moment she set foot on Canadian soil. Advertisers enthusiastically took part—the Parker Fountain Pen Co. announced a new ink for its Vacumatic model, “the prince of pens.”

There also was amusement to be found in the dogged way prime minister William Lyon Mackenzie King stuck to the king and queen, at once asserting his position as the king’s chief adviser and absorbing as much as possible of the royal couple’s popularity. (At Banff Springs Hotel, the prime minister posed for a photo with the royal couple, and promptly had the king airbrushed out, leaving him alone with Elizabeth—a politician of genius, King also knew a star when he saw one.) When George and Elizabeth and their omnipresent prime minister were joined in Winnipeg by mayor John Queen, the result—two kings and two queens—managed to so confuse a local broadcaster that he swore on-air.

Much has changed since 1939 in the relationship between Canada and Britain, and in our attitude to the monarchy, which no longer inspires deference or martial loyalty. What still remains, what links 1939 and 2011, as the visit of William and Kate has demonstrated, is Canadians’ affection for Canada’s royal house.

Stephen and Laureen Harper also presented the Duke and Duchess of Cambridge with a May 1939 copy of Chatelaine, commemorating the visit of King George IV and Queen Elizabeth. Read more at Chatelaine.com.

To view the souvenir edition of Maclean’s in its entirety, click on the thumbnails below: