A McGill alumnus with some questions for his alma mater

Evan Solomon wrote to McGill with pointed questions about how it handled the Andrew Potter affair. The answers did not impress. 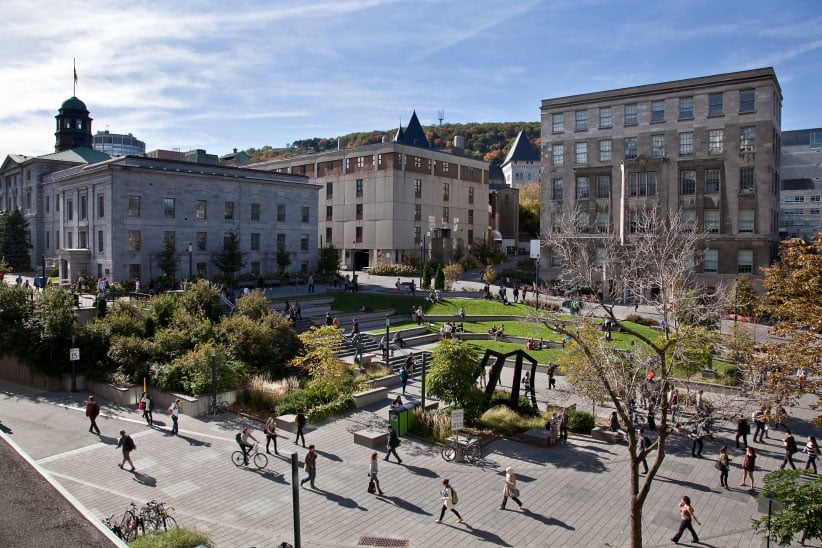 The Ferrier Building and Dawson Hall are seen from the Engineering building at McGill University. (Photograph by Roger Lemoyne)

Is it the job of a university professor to provoke debate? Apparently not, according to McGill University principal Suzanne Fortier. In an interview with The Globe and Mail, Dr. Fortier justified Dr. Andrew Potter’s resignation as the director of the McGill Institute for the Study of Canada with this incomprehensible distinction: “We have an institute that is there to promote discussions between people who come to the table with very different perspectives. It is not a role to provoke, but to promote good discussion.”

EDITORIAL: Why Maclean’s will not take down Andrew Potter’s piece

Well then, gather your angels and start them dancing on the head of a pin, because I have no idea what the difference is between “provoking” and “promoting” a discussion. If the principal meant McGill now has zero tolerance for poor column writing—and Potter himself immediately apologized for what he called his “sloppy” work and his “errors and exaggerations”—then at least we could debate what that means for academic freedom and for the directors of certain institutions. That would still be virtually impossible to defend, but at least it would be a position. If professors are no longer allowed to provoke political debate or take sides on issues that might disturb some people, that, too, would merit serious debate. But that was not what the principal said. Instead, she justified a resignation now shrouded in mystery with a distinction between provocation and promotion.

So I wrote to her to find out what exactly she meant.

MORE: How Potter’s resignation as a McGill director affects women and people of colour

Now, I know a lot has been written about this situation, and the Canadian Association for University Teachers is urging an investigation into Potter’s resignation, but as a McGill alumnus who loves the institution (and, full disclosure, also as someone who knows Potter as an acquaintance), I thought my correspondence with McGill might be of interest, if only to show again how troubling and abstruse this whole story has become.

I asked Dr. Fortier this series of emailed questions:

“Can you please define what you mean by ‘provoke’ and what the difference is between ‘promoting good discussion’ and ‘provoking’? Who defines that? What is the punishment when a good discussion suddenly becomes provocative? Where do you draw this line?

“Can academics no longer write newspaper columns or are they restricted to academic journals? Are some academics at McGill allowed to provoke and others are not?”

A few hours later, I received a response from Carole Graveline, McGill’s senior director of public and media relations, on behalf of Dr. Fortier. There were no answers to my questions, no attempt to explain what the principal meant. Instead, she simply re-sent Dr. Potter’s own letter of apology, as if that would do the job.

“Here’s what Andrew Potter wrote in his letters of resignation and apologies, and where he draws the line between promote and provoke:”

She then pasted in parts of Mr. Potter’s apologia, in which he admits to the failures of his column. The trouble is, nowhere does Mr. Potter draw any distinction between “provocation” and “promotion” of a discussion.

While I appreciate that Mr. Potter’s column has “provoked” significant negative response—I won’t wade into a debate on the column’s merits, as Dr. Potter himself has done a thorough job in his mea culpa—but still, how this leads to Dr. Potter’s voluntary or forced resignation remains a mystery. What message does that send to other academics?

I wrote back to Ms. Graveline and explained that her response had in no way answered my questions.

“Dear Carole,” I wrote. “Thank you for this. Frankly [Dr. Potter] does not make a distinction, rather he apologizes for a sloppy column. So I am still not sure where the university lands on this distinction.”

I then asked the questions everyone wants to know.

Did McGill ever say Dr. Potter would be fired if he did not offer his resignation?

Would he have been removed from his position if he did not resign?

After no response came, I sent one more note and asked if my questions would be ever answered.

The response was terse: “No, sorry Evan.”

I was shocked. They left all of my questions unanswered—including the crucial one: had they pressured Dr. Potter to leave his job?

Universities exist to provoke ideas, not “promote” things—that’s what PR companies do. “No, sorry,” is not the motto I remember from McGill.

It is quite clear that fundamental and troubling questions remain about this incident, crucial questions in a country that relies on academic freedom to provoke discussion. There is a responsibility to be accurate, of course, and Dr. Potter has accepted that. There might even be some form of discipline associated with poor scholarship for someone in his position. But so far, all we have are vague answers and a black hole of information.

This is not the university I remember.