Anne Kingston: A woman told CTV that she has handed over surveillance video to police that showed a car sitting in the Shermans' driveway a day before their bodies were found 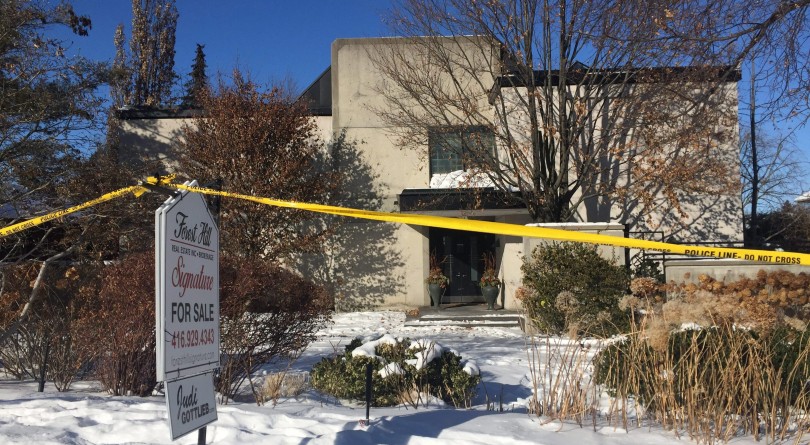 This Jan. 6, 2018 photo shows police crime scene tape marking off the property belonging to Barry and Honey Sherman, who were found strangled inside their home on Dec. 15, 2017. Since that time, investigators have scoured the 12,000-square foot home, hauled away the couple's cars and even checked the sewers in one of Toronto's most exclusive neighborhoods for clues. But police haven't made any arrests, announced the search for any suspects or said practically anything publicly about the deaths of the drug company founder and his wife. (AP Photo/Rob Gillies)

Recent news that the children of Barry and Honey Sherman filed an application to raze the Toronto house where their parents’ bodies were found in Dec. 2017 made little more than a ripple. Levelling the property, vacant for more than a year, is understandable: CBC reported that the family’s statement noted the house “contains bad memories and stigma.” As one of the most notorious crime scenes in Canadian history, the residence is also next to impossible to sell.

The potential eradication of the Shermans’ house marks yet another milestone in the vanishing murder investigation involving the high-profile billionaire couple—he the founder of generic drug giant Apotex, she a major philanthropist. The family took the unusual step of obtaining court orders to keep private the progress of the Toronto police homicide probe and, more rarely, seal almost everything related to the couple’s estates, estimated to be worth $5 billion, to preserve the “privacy and dignity” of the victims and to protect the heirs from possible violence from the couple’s unknown killer or killers (it has also been reported that Honey’s last will and testament has gone missing). The police officers who initially led the investigation have been promoted, clearly for reasons other than solving it. There is now reportedly only one full-time officer on the case.

From the outset, the investigation into the Shermans’ case has been rife with speculation and unsourced leaks and in the process, unprecedented duelling investigations emerged. Hours after the grisly discovery of the couple’s bodies, the family, angry that police were suggesting the deaths could be a murder-suicide, retained criminal defence lawyer Brian Greenspan to head a group of private investigators. There was controversy early on in the investigation when family friend and Toronto mayor John Tory spoke of the family’s concerns to police. In October, the family posted a $10-million reward for information leading to the arrest of the killer or killers.

In its reporting on the bid to knock down the house, CTV stumbled upon what could be that very thing—a previously unreported, potentially key piece of evidence. In canvassing the neighbourhood for reaction, a reporter interviewed a woman who chose not to appear on camera or make her name public. She revealed that she handed over surveillance video to police that showed a car sitting in the Shermans’ driveway on Dec. 14, a day before the bodies were found and a day after the couple was last reported seen alive. In it, a man was seen “sometimes sitting in his car for up to 15 minutes, then going inside” the house.

The fluke disclosure is a reminder that the Toronto Police Service has more evidence than the public knows—and also that the police don’t share evidence with the public. Much of what is believed about the Sherman case—that neighbourhood video surveillance failed to unearth anything, that the couple was found with their coats pulled back behind their backs with arms bound—is the product of speculation or attributed to unsourced leaks.

Now, newly revealed information that a man was seen in plain sight in front of the Shermans’ house (and entering it) the day before their bodies were found raises questions about the investigation—just as it appears to be disappearing before our eyes.

MORE ABOUT BARRY AND HONEY SHERMAN: