A Saudi teenager is welcomed to Canada (and its politics)

Image of the week: Rahaf Mohammed al-Qunun stepped off a plane in Toronto and into the arms of Canada's foreign minister. It was a big win for both. 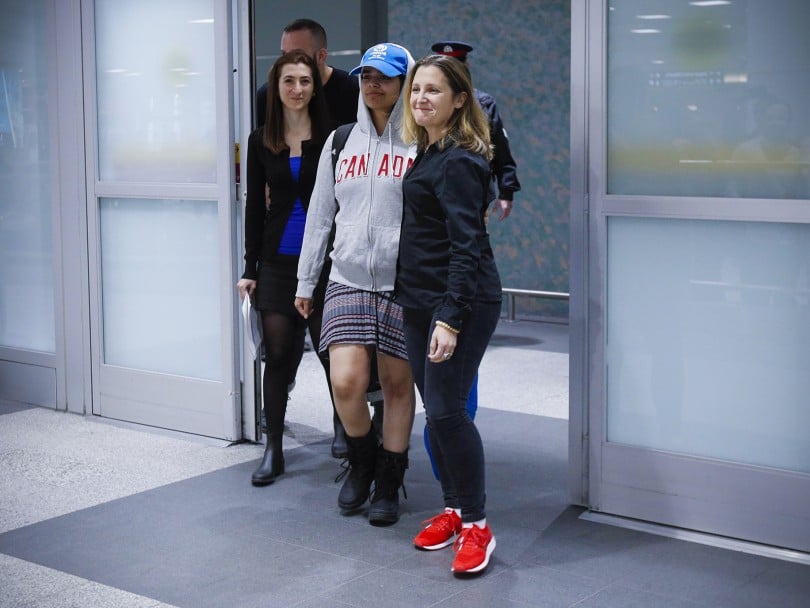 Saudi teenager Rahaf Mohammed al-Qunun is welcomed by Freeland as she arrives at Pearson International airport in Toronto on Jan. 12, 2019.(Lars Hagberg/AFP/Getty Images)

On Jan. 5, 2019, Rahaf Mohammed al-Qunun created a Twitter account, launching a flurry of desperate messages for help. The Saudi teen claimed her father was forcing her into an arranged marriage, the Saudi embassy was hunting her down and she was presently trapped in Bangkok’s airport. “I’m afraid,” she wrote, “my family WILL kill me.” Her pleas to the United Nations High Commissioner for Human Rights went instantly viral, and by Jan. 12, al-Qunun—now armed with 180,000 Twitter followers pushing #SaveRahaf to trend worldwide—stepped off a plane into Toronto’s Pearson International Airport, the arm of Foreign Affairs Minister Chrystia Freeland casually draped over her shoulder. For the two women, it was a win-win situation: al-Qunun manifested her own destiny in a remarkable week, and the Canadian government got to underscore its recent moral crusade against Saudi Arabia. After an unusually tense year between the two countries—in which Freeland criticized Saudi Arabia’s record on women’s rights, prompting the Saudis to expel Canada’s ambassador, followed by the assassination of Saudi journalist Jamal Khashoggi and the Canadian government’s attempts to backpedal from a controversial weapons deal—it seemed all too perfect, this young girl, savvy on social media, arriving in a Canada-branded sweatshirt and knee-length skirt she’d never be able to wear in her native homeland. Critics rolled their eyes at Freeland proudly showcasing al-Qunun to the world while simultaneously announcing she had a long journey and needed time to rest. Political opportunism aside, there’s consensus that the most important goal was achieved: a traumatized teenage girl can sleep comfortably for the first time in years.