Image of the Week: First Nations in northwestern Ontario are rushing to help COVID-stricken Bearskin Lake. By snowmobile, if necessary. 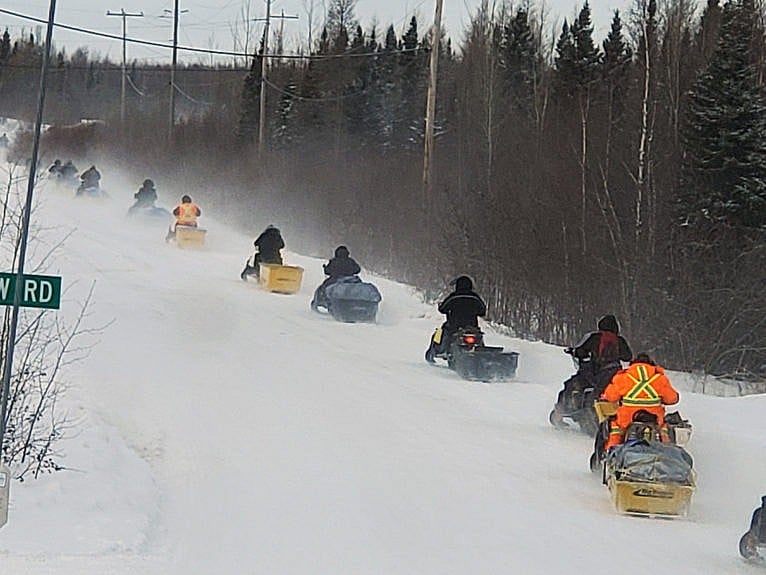 More than two dozen people took off on a convoy of snowmobiles from Kitchenuhmaykoosib Inninuwug to deliver supplies to Bearskin Lake First Nation. (Linda McKay)

This week, Bearskin Lake First Nation, a remote community in Northern Ontario of about 400 people, was struck hard by COVID-19. Some 187 people tested positive and more than 200 residents were now in quarantine due to exposure risk, including health care professionals, essential workers and community leaders. Ottawa has offered $483,000 to help, but locals say money isn’t enough. What good is cash if you can’t leave the house? What they need are deliveries—and that’s where Bearskin Lake’s neighbours stepped in. Seven trucks packed with firewood drove more than 100 km from Muskrat Dam First Nation; fundraising drives in Sandy Lake, Pikangikum and Kenora collected $100,000 to buy and ship food and supplies; Wapekeka First Nation residents chartered a plane to deliver more essential goods; and, most photogenically, more than two dozen people from Kitchenuhmaykoosib Inninuwug, 70 km east and inaccessible by road, linked together into a “Ski-Doo train” to ride through -40 C windchill to deliver what food, diapers and firewood they could manage. Riders wore moose hides underneath parkas, beaver hats with snow pants, and even draped garbage bags over themselves to block the wind. After arriving at Bearskin Lake, they dropped off their loads, turned around and headed home. The whole trip took seven hours. It’s hard to imagine most Canadians going through such extreme lengths to help others so far away; then again, it’s hard to imagine so badly needing to.