A statue of John A. Macdonald rests in purgatory 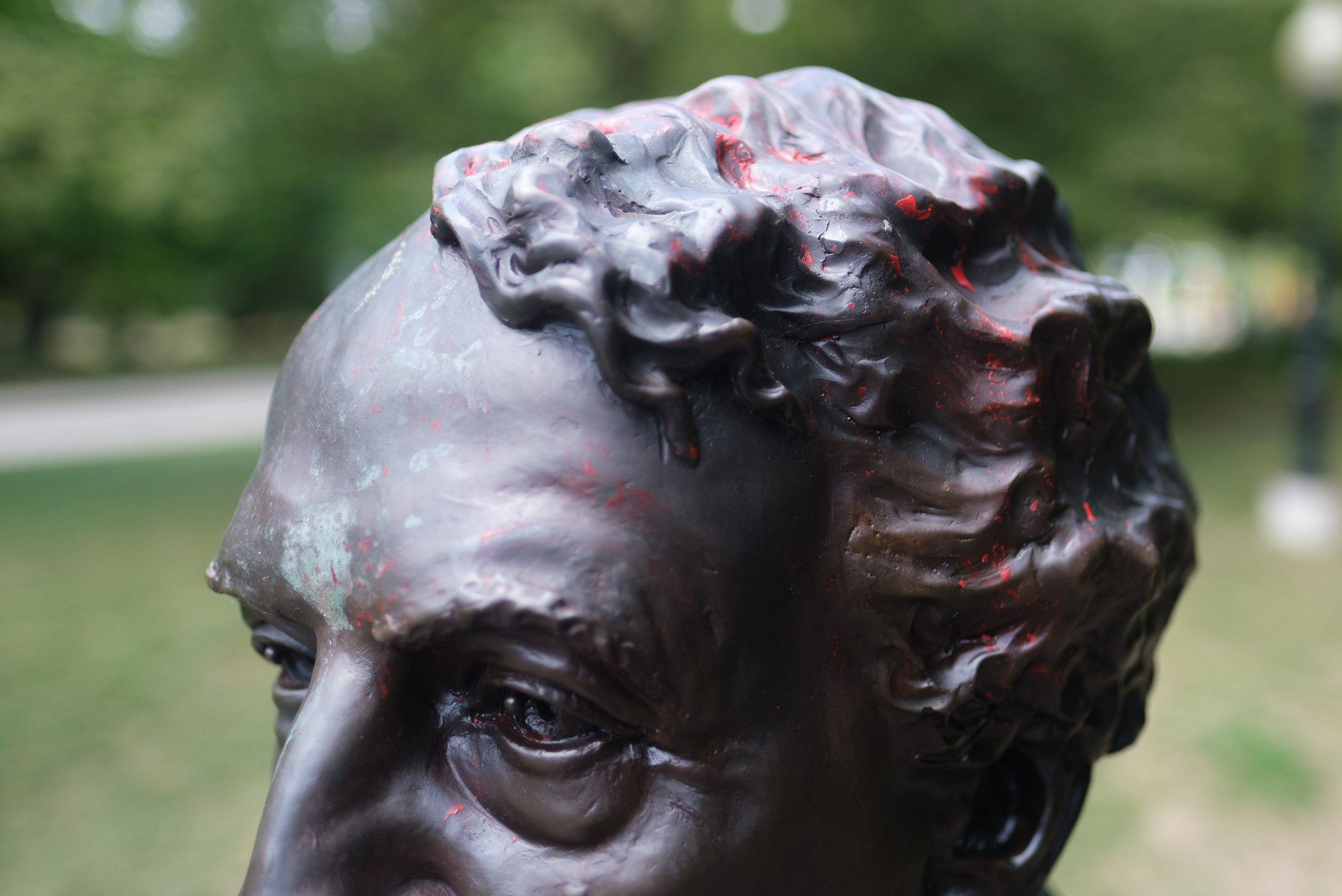 Close up of the sculpture of Macdonald at the entrance of The Prime Ministers Path in Wilmot, Ont. (Photograph by Yader Guzman)

There are remnants of red paint in John A. Macdonald’s hair and more by his feet. As far as statues go, this one located in Wilmot, Ont., a rural township outside of Waterloo, got off relatively unscathed. What was once a well-meaning project to create a “Prime Ministers Path” featuring life-sized bronze sculptures of every Canadian prime minister—23 and counting—has become a politically charged minefield as the legacies of the nation’s early leaders are reappraised according to contemporary standards.

The primary target is Sir John A., who is remembered not simply as Canada’s first prime minister, but also as one of the architects of Canada’s shameful residential school system, which forcibly removed Indigenous children from their families. On a late August day in downtown Montreal, the fate of another Macdonald statue was more dire, after protesters toppled and decapitated it in the process. By then, Wilmot’s town council had voted to put theirs into storage, perhaps saving the statue a similar fate, but the township is now engaged in a great soul-searching in order to come up with a way forward for the project.

If racism is a disqualifier, it’s not a long walk on what has already been built along the Prime Ministers Path until one stands before another prime minister that shouldn’t make the cut. There’s the statue of Canada’s prime minister during the First World War, Sir Robert Borden—with a newspaper in one hand and his cane in the other—who won the 1911 election using the slogan “A White Canada” in B.C., appealing to anti-Asian xenophobic sentiment. And it’s only a few steps from there to the statue of William Lyon Mackenzie King, who is remembered for leading Canada through the Second World War—and less remembered for turning away a boat of Jews fleeing the Holocaust and sending them back to Europe, as well as the internment of Japanese Canadians.

Jim Rodger, one of the co-founders of the Prime Ministers Path, was once the principal of a high school in Kitchener, Ont., that William Lyon Mackenzie King attended in the late 1800s. For the school’s 150th anniversary in 2005, it commissioned a sculpture of King as a student for its front lawn.

Come 2012, Rodger and Kitchener businessman Dave Caputo came up with the idea to make something even grander—a path of statues featuring every prime minister since Confederation. “The project will demonstrate our recognition of a rich and not always perfect story on Canada’s 150th anniversary,” Rodger wrote in a Waterloo Region Record op-ed in 2013. First they approached the city of Kitchener with hopes to erect the statues in Victoria Park. The duo said they would solicit donations, commission the sculptures and then gift the statues back to the city. But their offer was ultimately rejected, in part because of the auxiliary costs of maintaining the statues, but also because critics said the city shouldn’t be commemorating former leaders who were “racists.”

Undeterred, Rodger found a new home for the project at Wilfrid Laurier University—the only university named after a prime minister. Only after the first statue was erected on campus—that of Sir John A. Macdonald holding two empty chairs, titled A Canadian Conversation—was the university swiftly criticized both by its students as well as some professors, one of whom started a petition to stop the statue project. 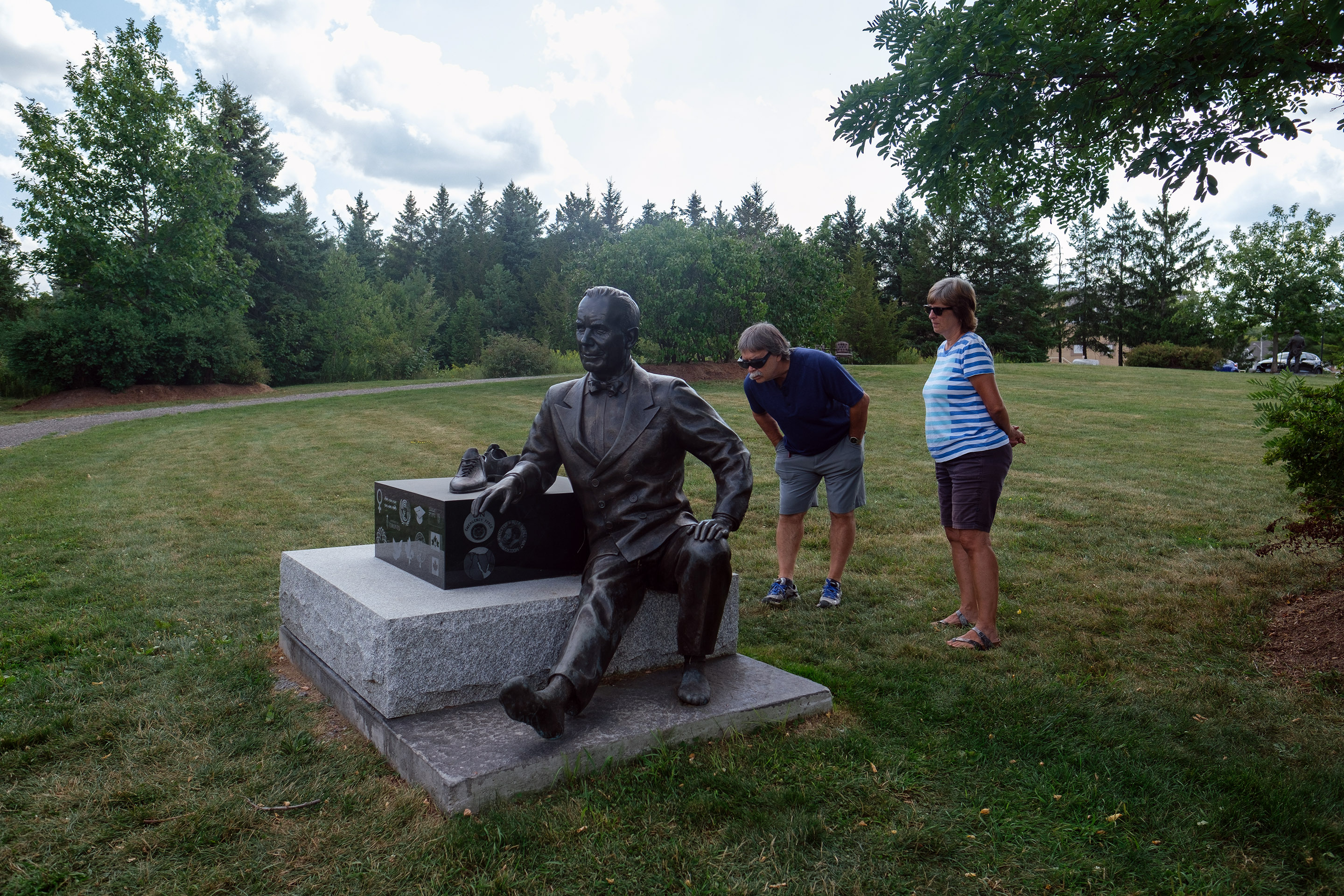 “We don’t have a problem acknowledging the unseemly side of some of our leaders,” Rodger says in an interview. But he adds that you can’t tell the story of Canada’s prime ministers without Macdonald. When Wilfrid Laurier University abandoned the project, the township of Wilmot (population: 21,000) came forward with a plan to become a permanent home to the Prime Ministers Path.

Rodger made sure the first five statues commissioned represented leaders from different eras in Canada’s history, including Lester B. Pearson and Kim Campbell. Earlier this year, Rodger announced the forthcoming unveiling of the path’s next four statues—Sir John Abbott, Sir John Thompson, Sir Mackenzie Bowell and Sir Charles Tupper (dubbed the “Unfortunate Four” by Rodger for their brief tenure in office emning 1891-96)—only for the pandemic to delay the event.

Then, in June, the statue of Macdonald was doused in red paint three times in the same week.

“If you are an Indigenous person in Wilmot, you must cross the path of Sir John A. Macdonald to get a building permit to put up a shed, get a dog tag or participate in municipal politics,” says local councillor Angie Hallman. “You don’t have a choice but to face the person who caused the genocide of your people and eliminated part of your family tree.”

Relegating Sir John A. to a repository has polarized locals, from a “Save our Statues” grassroots organization—which maintains that tearing down statues will deprive people of the debate about Canada’s history—to others who insist there’s been enough consultation already (from when the project was rejected by the city of Kitchener and again by Wilfrid Laurier University).

RELATED: Statues of limitations: Why the present shouldn’t attack the past

Who is left to consult? “It should not be the responsibility of Indigenous peoples to continuously provide free education while council gets up to speed,” explains Lori Campbell, adjunct faculty member at the University of Waterloo and director of Shatitsirótha’, the University of Waterloo’s Indigenous student centre. “With commemorative statues in a public park, what it does is exclude me from going there. I would not go there to have a picnic on the lawn in front of the man who caused the death of tens of thousands of my ancestors.”

And if the project is about education, Campbell continues, why has no one added signage to mention Macdonald’s ties to residential schools?

The township of Wilmot’s pamphlet of the Prime Ministers Path makes no mention of his racist past. “This isn’t a big town. There isn’t tons of money. And that’s a horrible excuse,” admits Rodger. “The development of those resources lags behind what’s here.” He’d certainly like to see more signs and educational materials to address those leaders’ cruel policies, he adds.

The ex-principal still speaks about the project’s potential; he hopes to be able to relocate the statue of Sir John A. so that it’s not so prominent, but maintains they should remain outside in a public area where anyone can interact with them as they see fit.

“People don’t talk about things that aren’t there” Rodger says. “If red paint gets left on Macdonald and that’s the cue that gets people talking about Indigenous issues, that’s not a bad thing.”

This article appears in print in the October 2020 issue of Maclean’s magazine with the headline, “Statue of limitations.” Subscribe to the monthly print magazine here.