Alberta, the one-issue province. (Yes, that issue starts with a P and ends in -ipeline)

The NDP government no longer talks about diversifying the economy. Nowadays, the future of everything is tied Kinder Morgan's oil shipment project. 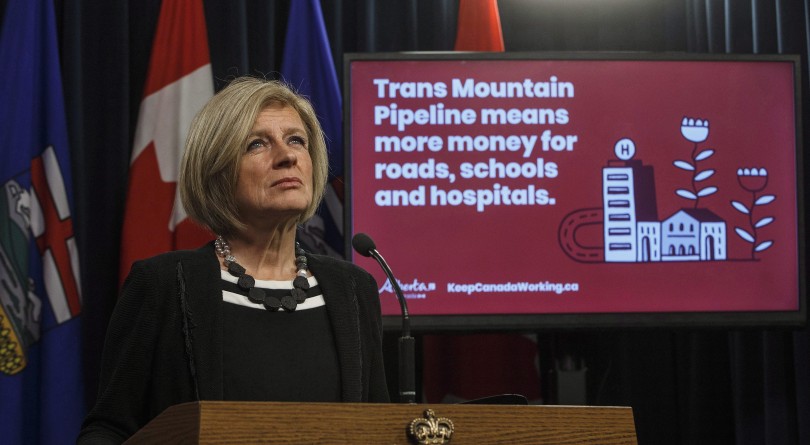 Alberta Premier Rachel Notley unveils an ad they will be running in B.C. about the pipeline expansion in Edmonton, Alta., on Thursday, May 10, 2018. (THE CANADIAN PRESS/Jason Franson)

All good interprovincial spats need their share of pithy volleys. “They cannot mess with Alberta,” Alberta Premier Rachel Notley said in April. Banning B.C. wine is “over the top,” counterpart John Horgan said when Alberta did so for a few days in February. As the spat drags on for months, the snark begins to set in. Here’s Notley this Tuesday, on B.C.’s lawsuit to block Alberta legislation that would cut westward oil flows to an anti-pipeline province. “On one hand they don’t want our oil, and on the other hand [B.C.] is suing us to give them our oil. So, that happened.”

One of the deftest bits of rhetorical backhand came this week from Jen Holmwood, a Horgan spokeswoman. Notley had announced she’d skip the western premiers’ summit in Yellowknife because of B.C.’s pipeline opposition and the looming May 31 deadline for Kinder Morgan to agree to proceed with or abandon its Trans Mountain expansion (a.k.a. THE pipeline). Horgan would fly to Yellowknife, where provincial and territorial premiers would discuss pharmacare, marijuana and more. “We’re not a one-issue province,” Holmwood told the Globe and Mail.

Alberta, on the other hand, has become a one-issue province like few others in recent memory. Think of Quebec amid its sovereignty referendums, or Newfoundland during the collapse of the cod fishery a quarter-century ago. In Alberta, this one feels existential, as though the $300-billion annual provincial economy, the jobs of 2.3 million people and the happiness of 4.3 million Albertans hinge on the success or failure of the $7.4-billion westward pipe expansion.

A recent poll by Janet Brown Research for CBC Calgary’s Road Ahead project illustrates how dominant pipelines are in Albertans’ minds, suggesting this obsession goes beyond the political fray. The perennial top-of-mind issues for most Canadians are health care and education. In Alberta, those are way, way down. Pipelines and energy are the biggest, followed by economy, jobs and deficit. Memories of the 2015-2016 recession weigh heavily on the provincial psyche, and unemployment hasn’t fully receded. The public has yoked economic future to getting one pipeline built to a coastal port, and the grievances toward outside jurisdictions are real. 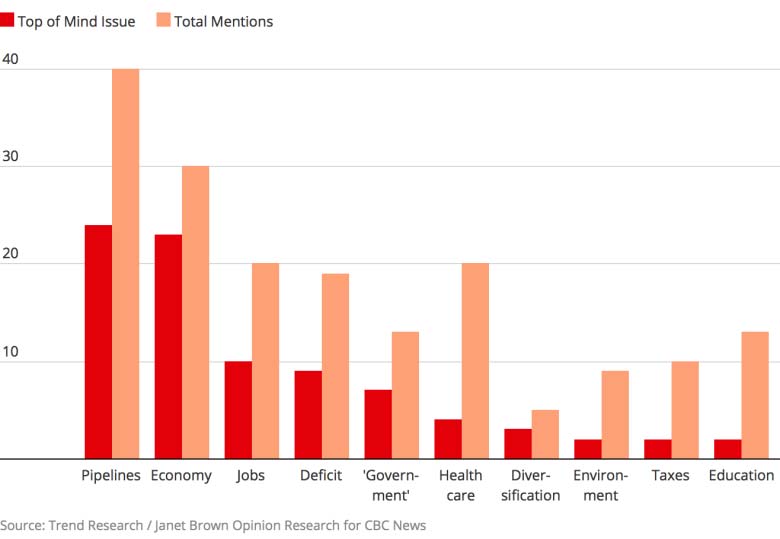 Getting a pipeline built will help business investor confidence, which helps Alberta’s economic growth. A new ATB Financial outlook suggests growth will dim and financiers will hold back investments if delays persist, though it doesn’t quantify the risk. But that’s a damper on future expansions, not the jobs of today, notes University of Calgary economist Trevor Tombe. He points to a National Energy Board study that suggested that in a “constrained” pipeline scenario, oil production would be eight per cent less than in a freer-flowing situation. “The industry will still grow, just not as much as it otherwise would have,” Tombe says.

Alberta sent Deputy Premier Sarah Hoffman to the western premiers’ gathering in Notley’s stead, while the premier focused on pipeline strategy and spiting neighbours. Hoffman refused to sign the perennially bland communiqué on issues the premiers discussed, for want of B.C. concessions on pipelines.

Every day of pipeline bottlenecks costs Canada $40 million, Hoffman told reporters Wednesday, using a Scotiabank economist’s figure. “While I love pharmacare, while I love the work that we’re doing to ensure that our streets are safe with the legalization of cannabis, all of this costs money, and we have one way to ensure we have this money,” Hoffman says.

Once upon a time, this NDP government spoke of diversifying the economy; but it has since realized how challenging that is, evidently, and now hews to the old Conservative tack of hoarding its eggs in one basket.  The NDP now ties the future of hospitals and schools to that of Kinder Morgan’s oil shipment project, further making pipelines Alberta’s lynchpin issue.

While the Trans Mountain saga is surely a front-page fixture on the west side of the Continental Divide, there it must jostle with other issues: housing affordability, the Vancouver and B.C.-wide civic elections, a mess at the provincial insurance agency. For environmental and Indigenous activists, the pipeline poses an existential threat, but there seems a much wider swath of Albertans who imagine, as Notley herself noted this week, the sword of Damocles dangling overhead.

This all unfolds in one of three ways. The Indigenous and B.C. government’s legal battles against the project approval fail in short order, and the protests fizzle, allowing Kinder Morgan to start laying pipe and Alberta to look forward with confidence. Or, Kinder Morgan pulls the plug, no other proponent steps up and Alberta bemoans its ‘landlocked’ oil resources; it makes a fresh round of feeble attempts to diversify economically as the province struggles to simultaneously reconsider its identity and contain its outward rage. Or, most probably, some combination of government backstopping and investor determination keeps the Trans Mountain project sputtering along—and all Alberta eyes obsessively on a single prize.