As its money-making oil industry shrivels, Alberta is faced with a seismic reordering of its books—and the notion that it's now an outlier for the wrong reasons 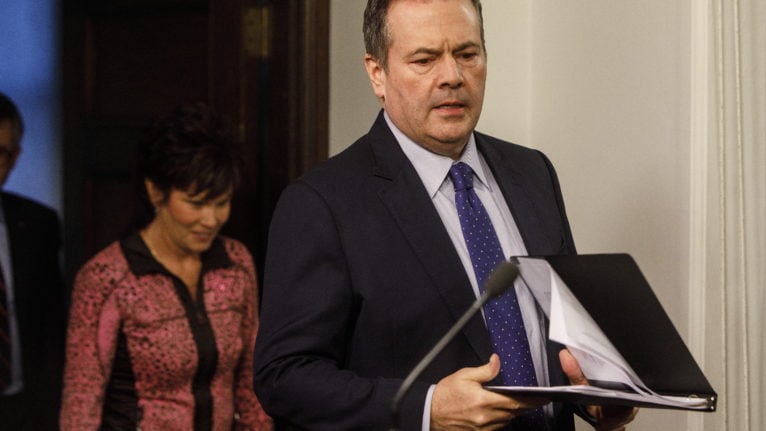 Kenney updates media on measures taken to help with COVID-19, in Edmonton on March 20, 2020 (CP/Jason Franson)

Wild Rose Brewery was one of Alberta’s pioneers in the micro-biz, launching in 1996. So to the envy of all more recent craft brewers, it arrived first to name its oatmeal stout Alberta Crude. It’s a decent, malty, heady beverage, if you like stouts.

That Alberta Crude has also become, pretty much, a more meaningful black substance to Alberta government coffers than its namesake. We’re no longer in those bleak spring days when a beer pint cost more than an oil barrel, but Alberta’s liquor regulator will net $842 million from booze sales this fiscal year, compared to $316 million royalty revenue from traditional non-oil-sands crude oil—down by nearly three-quarters compared to February’s pre-pandemic budget forecast, the province’s newest financial update states. The real money-maker for Alberta, bitumen royalties from the oil sands, will shrivel to $686 million. That’s down from $3.2 billion forecast for this year, or more than $4 billion last year.

The Kenney government got out its surfer-dude thesaurus for the headline on Thursday’s press release: “COVID-19 and oil price collapse crush province with historic deficit.” The pandemic has pushed governments all around the world into unprecedented red-ink territories (see Canada’s $343.2-billion deficit, Ontario’s at $38.5 billion), so Alberta and its $24.2-billion fiscal hole isn’t a complete surprise. But in most other jurisdictions, the huge imbalance came because of massive new health care and service spending. Alberta’s fiscal bleeding is overwhelmingly on the revenue side—it’s nothing more than an epic reconfiguration of how what I’ve long called Canada’s petro-province brings in dollars.

In a world with far fewer daily commutes and global plane trips, and continued brinkmanship between oil producers Russia and Saudi Arabia, the foundations upon which Alberta’s finances have always rested no longer exist. In total, oil and gas revenues will bring in $1.2 billion, nearly one-tenth the levels from nine years ago. The provincial gas pump tax will bring in just a hair less. Post-secondary tuition will bring in more.

Corporate income tax will be $2.1 billion, less than half what it was pegged at in February—and that’s not because of Premier Jason Kenney’s much-hyped corporate rate cut, but rather that almost nobody in Alberta is turning profits anymore. For all the omnipresent hue and cry about a fair deal from Ottawa, federal transfers to the province will eclipse $10 billion, not far off of what personal income tax (and Alberta’s low rates on high earners) will bring in.

Crushing, my dudes and dudettes. Faced with such a seismic reordering of Alberta’s books, Kenney’s United Conservatives barely shift the message they offered before spring 2020, but crank its volume. The province must “double down” on its efforts to spur economic growth, and “Alberta can no longer afford to be an outlier in terms of the cost of delivering services to Albertans,” Finance Minister Travis Toews told reporters. Kenney had already begun this cost-cutting quest, and its bitter grudge match over doctor pay has proceeded unperturbed by some pesky public health crisis. Expect more of this warring with the rest of the public sector, and what Kenney has called a “reckoning” on service levels.

Alberta’s oil wealth made the province the outlier it is on public sector pay and quality services, just as it has let it be the perennial outlier on the revenue side of the ledger. Lowest income taxes, lowest corporate tax, no PST, et cetera. Kenney and his ministers do muse, in a way they shied away from doing before Alberta’s revenue collapse, about needing to have this conversation with residents, but this is always a mañana proposition—something they can put off for later, while more urgently wrestling down the expenses that also make Alberta the national exception. Toews is right that a sharp tax hike or new sales tax might be a nasty jolt to economic recovery, but he doesn’t seem so fussed at the prospect of similar shocks to the service-receiving public, one already anxious about the safety of schools reopening and the Kenney government’s outlier reluctance to spend more to safeguard students.

As for Alberta growing itself out of this economic and fiscal mess, Thursday’s provincial report also predicts that the provincial unemployment rate will rebound from 12.8 per cent to 9.5 per cent. That makes Alberta the outlier among non-Atlantic provinces. Nothing resembles normal anywhere these days, but Albertans must start getting used to aspiring towards normalcy on nearly every respect of how its government functions, taxes and spends, whether Kenney is willing to talk about all of them or not.