The footage, obtained by Maclean's, shows the van running a stop light on Beecroft Rd. just seconds after pedestrians, including a woman with a stroller, had crossed

Updated April 27, 2018 at 2:40 p.m.: Account of witness who appears in video has been added. The map in this post had previously been updated to reflect information on the van’s route provided by eyewitnesses who reached out after seeing the video

Maclean’s has obtained chilling new video footage of the Toronto van attack—shedding new light on the route driven by the alleged killer, and revealing just how lucky some pedestrians were to avoid his deadly path.

It has been widely reported that the Ryder rental van travelled south on Yonge St. until reaching Poyntz Ave., where it turned right and was ultimately met by police. But this latest clip, recorded by a witness’ dashboard camera, shows the white Ryder van speeding south on Beecroft Rd.—one block west of Yonge. It is now clear that the van steered away from Yonge at some point after the rampage, then continued southbound on Beecroft.

The man who recorded the video, who has asked to remain anonymous, was stopped at the intersection of Beecroft and Sheppard Ave. W. shortly after 1:30 p.m. on Monday. He was driving north, waiting at a red light, when he saw the van approaching in the distance, heading south. “What caught my eye was that the wheel on the driver’s side was kind of crooked, so it was squealing,” says the man, 60. “Because of the damage in the front of the van, I thought the guy was running away from a hit-and-run.” 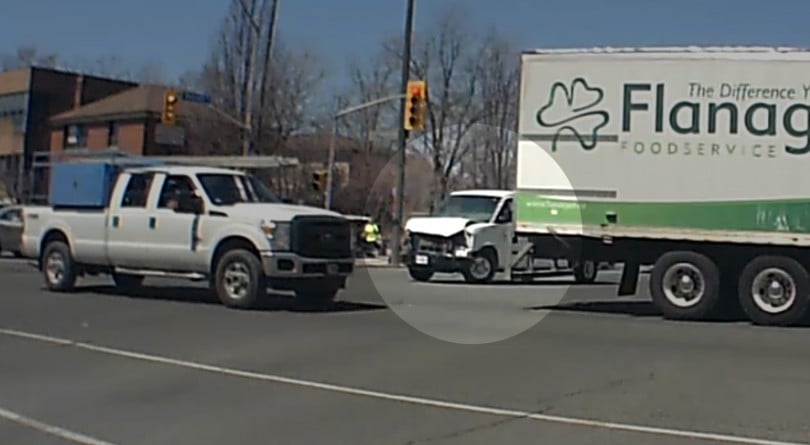 The van barreled through the red light, weaving around cars and trucks as it passed through the intersection. Three pedestrians—including a woman pushing a baby stroller, and another woman looking at her cellphone—had finished crossing the street just seconds earlier, oblivious to how close they came to being potential victims. 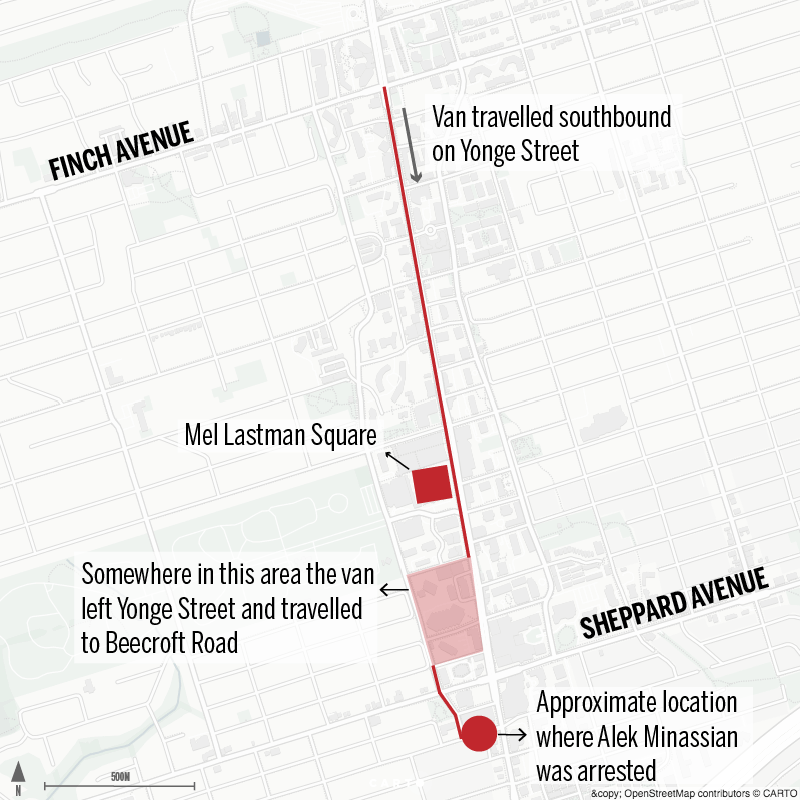 Moments later, the camera captures a police cruiser in pursuit, sirens blaring. It is not clear whether the police car belonged to Constable Ken Lam—the Toronto officer who arrested Alek Minassian, in a clip that has since gone viral—but the man who recorded the video showing the speeding van is fairly certain it was. In his rearview mirror, he could see the van turn toward Poyntz Ave., where the driver was apprehended.

The woman seen in the video pushing the stroller reached out to Maclean’s after seeing the clip online. Bryna Kligman, who is three months pregnant, was walking home with her young son from an appointment with her obstetrician. They stopped at nearby Wanless Park—“a reward for my son being patient while I was at my appointment,” she says—before continuing on to her home just past Beecroft Road.

Kligman could hear the van’s squealing tires before she saw the vehicle. “I thought it was actually going to drive right into the cars that were stopped at the lights. It was making a terrible grinding sound—it sounded like the brakes weren’t working. It made a very sharp left on Bogert Avenue. As I saw the police car coming down several seconds later, I was sort of waving my arms around trying to point to where the van had turned. I could see he didn’t know where the van had gone.

After Kligman had crossed the intersection she called her husband to tell him what had happened. Then she continued home, a five-minute walk from the traffic lights. Once there, she turned on the news, she says, and “my stomach dropped.” “Every day we do that walk almost. And just realizing that after heading through that intersection, it’s terrifying.”

A Toronto police spokesman declined to comment on the content of the video, including the van’s route, but said they consider the clip potential evidence and hope to speak with the person who filmed it. The man who shared the footage with Maclean’s is co-operating with police.

If you were recorded in this video, please contact Maclean’s.

New bystander video shows another angle to the standoff

This article has been updated to include a response from Toronto police.