An arms race that Canada could actually win

In its push to develop Artificial Intelligence, Canada could become a major player in a technology that will be crucial to the global balance of power 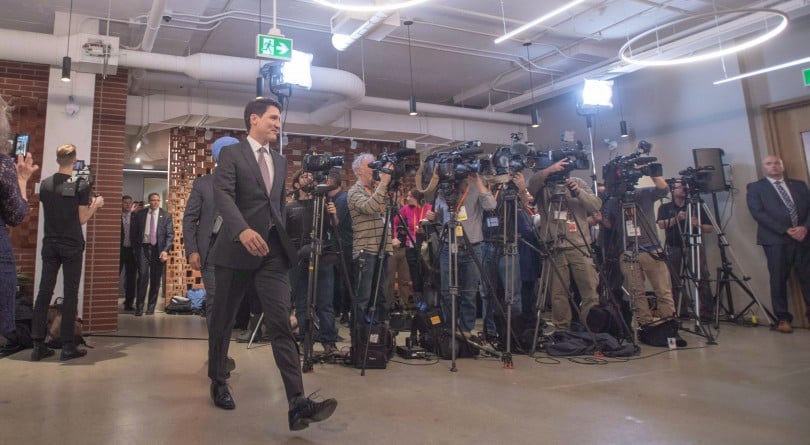 Canada has always sat out arms races of the past. When Britain and Germany were building ever-bigger battleships before the First World War, we didn’t even have a navy. In the Second World War, our biggest contribution to the Allied munitions effort was in building trucks and merchant ships. We took a pass on the nuclear arms and space races as well.

Now, however, the very nature of arms races is changing. And Canada today is fully engaged in an intense global competition for dominance in a technology with enormous economic, strategic and military significance. Could winning the Artificial Intelligence arms race change what it means to be Canada?

Widely recognized as the next technological revolution, Artificial Intelligence (AI) allows computers to observe, learn and adapt at incredible speeds. AI thus offers tremendous opportunities for change in commerce, medicine and almost every other aspect of day-to-day life. But AI also has countless military applications as well, including everything from advanced battlefield control and logistics to cyber warfare to the possibility of fully-autonomous Terminator-style killer robots and weapons platforms.

Previous arms races have generally been the domain of countries with huge military budgets and a desire to project power globally. True to form, both China and the United States are currently racing to achieve AI dominance for strategic purposes, just as Russia and the U.S. used to compete during the Cold War. Yet this time they’re not alone.

“AI research is not like building an aircraft carrier or stealth bomber,” says Michael Horowitz, a political science professor at University of Pennsylvania who specializes in military technology innovation. “It is a general purpose technology with much broader application—more like the internal combustion engine or electricity—and so lots of corporations and university are also now competing in AI expertise.”

Large tech firms such as Microsoft, Google and Uber, often in partnership with universities around the world, are challenging government research budgets with their own race to master AI technology. This heated competition between the public and private sectors, as well as AI’s dual-use nature, has blurred the distinction between military and commercial uses of the technology. To wit: it’s easier to turn a self-driving car into a self-driving tank than it is to turn an aircraft carrier into a floating resort.

All this means wealthy and advanced middle-power countries like Canada could suddenly find themselves standing alongside China and the U.S. as major players in a technology that will be crucial to the global balance of power.

“Leadership in AI will be a vital element of economic and military power over the next several decades,” says Horowitz. “And Canada is a good example of a country trying to take advantage of this critical technology,” pointing to our top-notch university system and robust immigration. He names Israel, Singapore, Japan and France are other countries with the potential to raise their global status once algorithms replace manpower as an essential component of military superiority.

Certainly the Trudeau government has not been shy in its excitement over AI, or stingy in throwing money at firms developing the technology. “Canada is a world leader in AI,” crows federal Innovation, Science and Economic Development minister Navdeep Bains in an interview from Montreal in December, where he was handing out $6.3 million in funding to a variety of local AI firms. “We firmly believe we are in a global innovation race and [Ottawa] has to step up and play an active role.”

Of course there’s a crucial distinction to be made between becoming a leader in a new technology with military applications, and wanting to use that to project power. Whatever the future might hold, it appears most Canadians are uninterested in leveraging AI dominance for broader strategic gain. “AI offers great benefits to society,” says Bains. “But we also need to make sure AI reflects Canadian values,” vowing to turn Canada into a world leader in ensuring the emergent technology “promotes human rights, diversity and equality” rather than any darker impulses.

A similar sentiment is expressed by Charmaine Dean, vice-president of research at University of Waterloo, another hotbed of Canada’s AI effort. “As a tech leader, we also need to be a leader in understanding the social impact of that technology,” she says, noting that she recently convened a committee to explore the ethical dimensions of her school’s AI push. According to a recent corporate survey by Forbes Insight, Canada actually leads the world in establishing ethics committees to study AI. It seems a perfectly Canadian thing to do.

And yet, as Horowitz points out, it is impossible to fully separate civilian and military applications of AI. University of Waterloo researchers, for example, currently have several defense-related projects on-going in the fields of AI and quantum computing, including a next-generation radar system for Canada’s military bases in the Arctic. So it’s not outside the realm of possibility that we could become a dominant player in the military uses of AI despite our abundance of ethics committees and sense of fair play.

If we did wake up one day to discover Canada is an AI superpower and that other nations tremble at our demands, it would necessitate a rather dramatic shift in our national self-image as honest broker to the world, notes Christian Leuprecht, a political science professor at Queens University and Royal Military College in Kingston. “This would burden us with a new whole set of moral obligations,” he says. “We’ve never had to take full responsibility for our own defense before because we’ve always hitched our wagons to bigger allies who took care of that.”

With AI threatening to disrupt all aspects of society, its ability to disrupt how Canadians see themselves may be the most difficult thing to change. As an AI superpower, observes Leuprecht, “Canada would have to take on much more responsibility on the world stage. And I’m not sure a country as diverse as ours is ready for that.”