Often, they receive about a quarter less funding for primary school education than other Canadian children 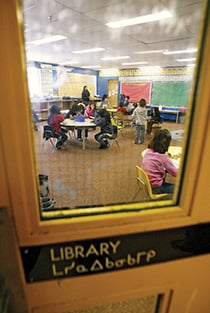 The two schools sit a mere five kilometres apart as the crow flies, in a rural stretch of Manitoba about four hours west of Winnipeg. Their soccer teams compete every spring. Their students groan over many of the same textbooks. But as the road from Rossburn Collegiate to the Waywayseecappo reserve school runs down a hill into a lush valley, it also crosses an invisible jurisdictional line that led to an egregious gap between native and non-native students.

After three years of talks, Aboriginal leaders in Waywayseecappo persuaded the provincial and federal governments to let them join the local school board, effectively transforming their Aboriginal students into provincial students. Under the agreement, the feds matched the provincial standard dollar for dollar. With 300 students enrolled from kindergarten to Grade 8, that meant an extra $1.2 million for Waywayseecappo’s annual budget. The school immediately hired six more teachers, and the average class size halved from more than 30 to around 17. Previously, an entire wing had sat empty for want of teachers. Now all the classrooms are in use. “We certainly managed before, but it just wasn’t fair,” says Troy Luhowy, the school’s principal, who notes that reading scores have already improved noticeably.

While the transformation of Waywayseecappo has been remarkable, in much of the country Aboriginal students on reserves receive about a quarter less funding for their primary school education than other Canadian children. And while there are some promising signs of change, Ottawa’s plodding pace, not to mention the reluctance of some First Nations communities to yield control of schooling to non-natives, suggests that for the majority of reserve students in Canada, funding equality remains a distant dream.

The Constitution puts the federal government in charge of Aboriginal issues, including education, while provinces handle education for everyone else. This applies even when reserve and provincial schools sit practically side by side, resulting in jurisdictional Swiss cheese. In the 1990s, as the Liberals grappled with Canada’s soaring deficits, they placed a two per cent annual cap on growth in expenditures on Aboriginal education. This was, ironically, a relatively generous allowance in an age of austerity. Soon, however, the feds started handing out six per cent annual increases in spending for social programs—like education—to the provinces.

Over time the two funding curves diverged, at first by a bit, eventually by a lot, with the difference compounding year over year until one day Waywayseecappo and Rossburn Collegiate looked at each other down the road and wondered how things went so wrong.

In principle, Canada’s Parliament believes this is repugnant. In February, MPs unaminously passed a motion, albeit a non-binding one, calling for an end to the funding gap. In this year’s budget, the Harper government committed an average of about $90 million a year over the next three years as part of what Finance Minister Jim Flaherty called “initial steps” to improve Aboriginal education. Yet even that measure falls far short of plugging the gap, say critics. The Assembly of First Nations (AFN) estimates the annual funding hole is about twice as large as the amount Ottawa is coughing up. It’s not just Aboriginal leaders pointing to the continued shortfall either. In April, economist Don Drummond delivered a belt-tightening report for an Ontario government deep in the red. He made 362 recommendations. Only once did he advise more spending, and that was to close the funding gap in Ontario between provincial and reserve schools. Ontario’s department of education estimated this would require a federal injection of $100 million a year for Ontario’s reserve students alone.

Drummond calls the current situation “a classic case of a failure to invest money incurring much bigger costs down the road.” Governments spend disproportionately on struggling Aboriginal adults; it would spend less if Aboriginal youth got a better education in the first place. “I try to be analytical,” Drummond says, “but the only explanation that fits is that we don’t care enough.”

Don Cochrane, chair of the school board that admitted Waywayseecappo into its ranks, was all too aware of the problems posed by struggling Aboriginal students. Since the Waywayseecappo school covered just kindergarten to Grade 8, students would then transfer to a local provincial high school. Many of them had trouble keeping up, and this led to class disruptions. “We were looking for a way to improve the graduation rates and social behaviour of Aboriginal students in our schools,” Cochrane explains. The fate of these schools was bound together whether or not they co-operated.

Waywayseecappo can now access specialists with the school board who help with curriculum and professional development. Waywayseecappo teachers also received raises of between $13,000 and $18,000 a year, bringing them in line with provincial peers who often poached the best reserve teachers.

More than government red tape stood in the way of Waywayseecappo students joining the provincial school board. Chief Murray Clearsky faced local resistance to the idea of ceding any local control to a non-native body. This position isn’t all that surprising, given Canada’s deplorable history of treatment of Aboriginal students at state- and church-run residential schools in the 19th and 20th centuries. Still, Clearsky was able to reach a deal that eased the community’s concerns. The reserve will continue to oversee curriculum and effectively drafts its own budget independently. “I am not giving up much authority for the amount of good education we are getting,” says Clearsky. “With more resources, the kids are already doing better.” He’s also now fielding questions from other reserves hoping to emulate the model.

There is certainly no shortage of cash-strapped reserve schools. In Saskatchewan, Education Minister Russ Marchuk estimates the funding gap there remains as high as 40 per cent per student. “You observe the effects of a lack of resources first-hand—lower graduation rates, lower employment rates, children not school-ready. These are the results of a lack of funding.”

Earlier this year, when Saskatchewan Premier Brad Wall was asked whether there was a good reason for a funding disparity, he said, “I haven’t heard one.” NDP MP Charlie Angus goes so far as to say Canada practises a form of “educational apartheid,” and the education system is “based on a system of racist discrimination” in how students are funded. But when it comes to the question of overall Aboriginal funding, most Canadians seem to disagree. A recent poll by Ipsos Reid found that 64 per cent of Canadians think Aboriginals get too much money from taxpayers.

For his part, John Duncan, the minister of Aboriginal affairs and northern development, questions the extent of the funding gap, saying “a lot of numbers are bandied about.” But he also says simply opening the taps wider isn’t the answer if reforms aren’t undertaken at the same time. Only about half of Aboriginal students graduate from high school, and few educators believe improving the performance of Aboriginal students is simply a matter of spending more money. A national panel sponsored by the AFN described the present “non-system” of First Nation schools as suffering from accountability and governance problems. The Conservatives promise funding to those willing to reform. “Where formalized systems are in place to give the student results we want, we will finance any spread in funding,” says Duncan.

To that end, in B.C. earlier this year the federal government committed $15 million to equalize some school funding starting this fall. In exchange, First Nations communities agreed to provide more transparent reporting on student results and school expenditures, as well as participate in more standardized assessments. And while the parties celebrated the agreement as a breakthrough, a Waywayseecappo writ much larger, it also took nearly 20 years of on-again, off-again talks to get to this point, which doesn’t bode well for Aboriginal students in other parts of the country.

The Harper government is now in the curious position of leveraging an inequality it controls to achieve the reforms it wants. In the long term, this approach may lead to more agreements like the one in B.C. But for now, those students who attend chronically underfunded reserve schools might be excused for agreeing with Angus that “some Canadian children have more education rights than others.”