‘He is very modest and does not talk about the war’

As Bob Bews buckled on his chute and stepped into the bomber cockpit, he grasped what he was up against. If a German flak battery didn’t shoot him out of the sky, an iced wing, mechanical malfunction or lightning storm could just as easily do him in. If he managed to escape death, he could always end up in a POW camp. And, if he returned safely, there were another 29 missions to fly. As a Royal Canadian Air Force bomber in 1943 and ’44, his chances of survival were roughly 16 per cent. He was among the one in six who survived.

Bob was born in Eatonia, Sask., on May 3, 1921, the youngest boy in a family of 10. “When the war broke out, I was too young to join the military,” he recalls, “so I stayed in school and worked on the family farm.” When he eventually enlisted, Bob was first posted in Brandon, Man., where he was “issued a uniform, learned how to bathe, shave, shine boots, polish buttons.” A month later, he travelled to Edmonton, where he studied math, signals, drills, discipline, law and hygiene. “One day, we met with William Lyon Mackenzie King,” Bob recalls. “He came to visit and speak with us.”

Between Edmonton, Dauphin, Man., and Mountain View, Ont., Bob racked up hundreds of hours in various aircraft—the Fairey Battle, the Avro Anson, the Bristol Bolingbroke—before becoming a staff pilot. “We flew over Lake Ontario and the students would drop large bags of flour on targets,” he says. Upon hitting the water, they’d explode. “You could see that from the air and know how close you were to the target.”

When Bob was sent to Yorkshire, England, in September 1943, he would be dropping more than bags of flour. During all-night raids, the 432 Squadron from East Moor dropped bombs on heavily defended German positions. “A typical tour was 30 operational missions,” he explains, “but I volunteered to fly an additional six.” When he beat the odds and survived those as well, the RCAF presented him a Distinguished Flying Cross that read: “This officer has completed numerous operations against the enemy in the course of which he had invariably displayed the utmost courage, fortitude and devotion to duty.” On a military parade in England, he met a 15-year-old princess—and soon-to-be Queen—named Elizabeth, who shook his hand and congratulated him. 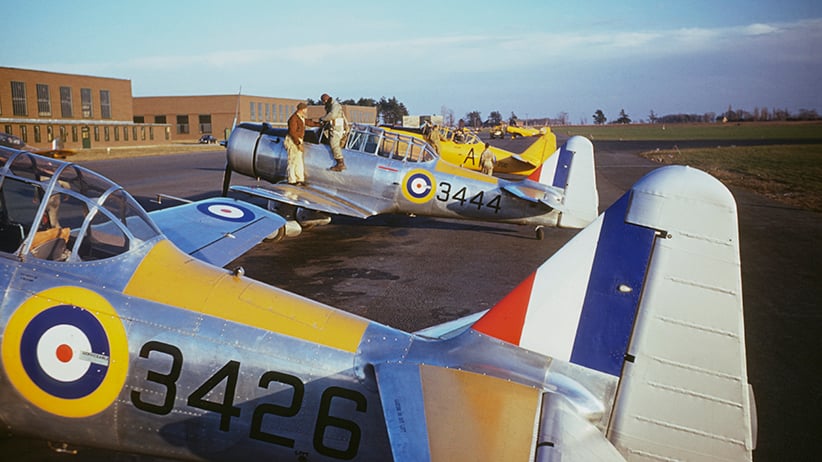 Bob returned to Canada in 1945 and married his wife, Dorothy (they celebrated their 70th anniversary last year), as he waited for his next tour of duty. “While we were on our honeymoon in Vancouver, the bombs were dropped on Hiroshima and Nagasaki.”

With the war over, Bob studied scientific agriculture at the University of Saskatchewan and continued to work on his family’s farm. For four years, he was a land appraiser; for another 15, in the 1970s and ’80s, he chaired the Surface Rights Arbitration Board.

Now living with Dorothy in Regina, Bob is an avid Maclean’s reader (he hasn’t missed an issue since the late 1940s) and a diehard Saskatchewan Roughriders fan (he’s held season tickets for the last 40 years).

In 2003, when his grandnephew Brian joined the RCAF, Bob presented him his wings. “He is very modest and does not talk about the war,” says Brian, who looks up to his great uncle. “These are the Canadian heroes from the past that we can’t forget.” — Luc Rinaldi