Andrew Scheer thinks he can actually build a pipeline

Sept. 25: Perry Bellegarde offers his own Trans Mountain solution, Doug Ford investigates his province's 'worst political cover-up,' and Trumpland was nutty as ever 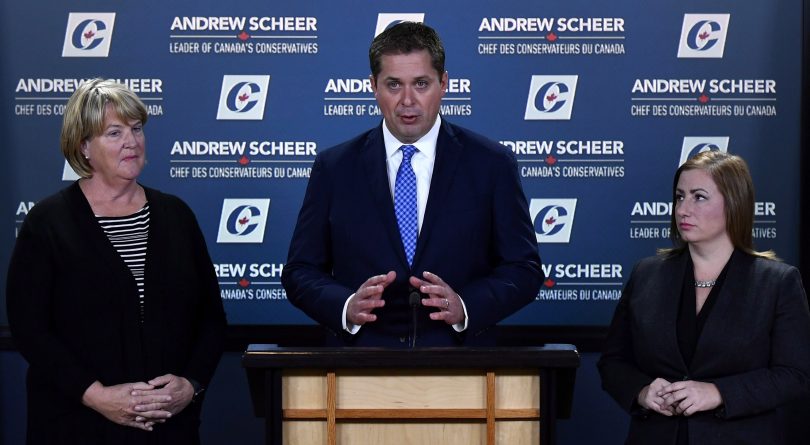 Conservative leader Andrew Scheer speaks during a press conference on his plan to get the Trans Mountain Pipeline built, as MPs Cathy McLeod, left, and Shannon Stubbs look on, in Ottawa on Monday, Sept. 24, 2018. (THE CANADIAN PRESS/Justin Tang)

Well, now we know how Andrew Scheer thinks he, as prime minister, would accomplish what the previous two guys in that job (so far at least) couldn’t: actually get a pipeline built. To push the Trans Mountain pipeline expansion through the Conservative leader said he’d scrap the carbon tax and invoke constitutional powers that would declare the project in the national interest. Oh, and he’d ban foreign funding from being used to oppose it. (Global News)

If Justin Trudeau really wants Trans Mountain built, he should try moving the marine shipping terminal, says Perry Bellegarde, national chief of the Assembly of First Nations. Indigenous communities like the Squamish First Nation will never back the pipelines, “so why not move (the terminal)? Why don’t you move it to Tsawwassen?  It might take a little longer, but it’s a win-win-win.” (Canadian Press)

In other stalled-pipeline news, TransCanada says construction will begin next year on the Keystone XL pipeline after a judge-ordered environmental review by the U.S. State Department concluded the risk of major environmental damage from a spill was minimal. (Associated Press)

In a new op-ed at Maclean’s, two federal cabinet ministers and a UN official make the case for why Canada will lead the charge on the UN’s global refugee program:

There are few moments in history where the world comes together to devise a new plan that holds the promise of improving the lives of millions of people. The Global Compact on Refugees—which has now been released after two years of consultations with member states, intergovernmental and non-governmental organizations, and refugees themselves, and will be formally adopted by the UN General Assembly in the next couple of months—has the potential to be one of these moments.  (Maclean’s)

Of 900 asylum seekers ordered deported from Canada, only nine have actually left. If you’ve been following along, that’s somewhat off from border security Minister Bill Blair’s erroneous claim over the weekend that the “overwhelming majority” of asylum seekers who arrived in the last 21 months “have left.” Blair followed up his Sunday afternoon tweetpology with a formal statement on Monday reiterating that he “clearly misspoke” and was trying to make a different point.  (Canadian Press)

New Brunswick went to the polls yesterday and this being 2018, uncertainty reigns. The Liberals and Tories were in a virtual dead heat at 21 and 22 seats respectively, several short of the 25 needed to form a majority. Two smaller parties will play a big role in what comes next. The People’s Alliance claimed its first two seats (and was leading in two other ridings) while the Green Party doubled its seat count to two and was leading in a third riding. ” (Globe and Mail)

If your a new premier of Ontario claiming the old premier of Ontario cooked the books, you’re going to have to step it up, given that every time power in the province has changed party hands over the last quarter century, the new gang has made that claim. And so in establishing a”select committee” to look into Ontario’s $15 billion deficit PC Premier Doug Ford called the province’s finances “worst political cover-up in Ontario’s history” and “the biggest scandal in a generation.”  (Toronto Star)

NDP Leader Andrea Horwath called Ford’s bluff: if you’re so sure a crime was committed, call the cops.

Another nutty day in Trumpland. “Even for an administration famous for chaos and rival factions, Monday’s events offered a remarkable display of the anxiety gripping the Trump administration.” That’s how the New York Times set up its tick-tock of deputy attorney general Rod Rosentiend’s resignation-non-resignation after the Times earlier reported he’d considered secretly taping the president and discussed ways to remove him from office:

A spokeswoman, Sarah Isgur Flores, began drafting a news release that Attorney General Jeff Sessions, who was on his way back from a weekend in Alabama, would distribute if Mr. Rosenstein were fired.

At the White House, the deputy attorney general slipped into a side entrance to the West Wing and headed to the White House counsel’s office to meet with Mr. McGahn, who had by then been told by Mr. Kelly that Mr. Rosenstein was on his way and wanted to resign. (New York Times)