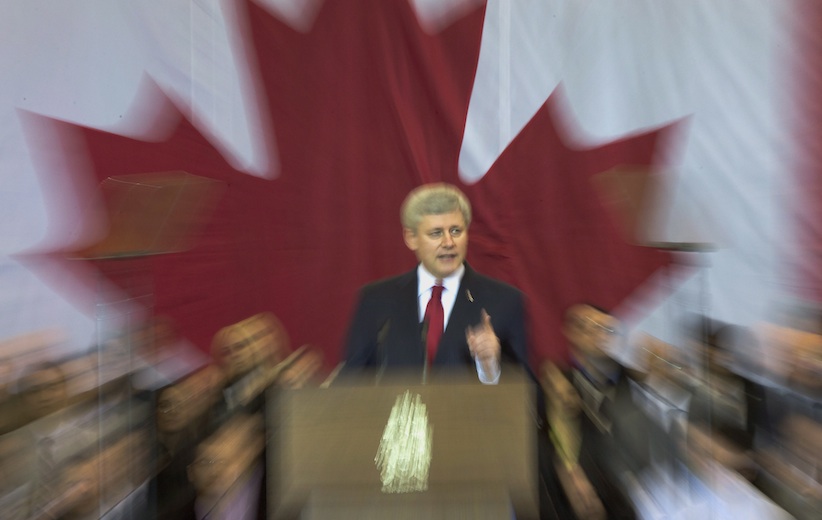 The Conservatives tabled an anti-terrorism bill today, three months after the fatal attacks on Cpl. Nathan Cirillo in Ottawa and Warrant Officer Patrice Vincent in St-Jean-sur-Richelieu. With sweeping reforms, the Anti-Terrorism Act (Bill C-51) proposes to amend existing laws, including changing the Criminal Code to give law enforcement officials broader powers to make arrests if they suspect terrorist activity “may be carried out” (changing the wording from “will be carried out”), and increasing the period of preventative detention to seven days from three. The bill would also expand the no-fly list, bolster the Canadian Security Intelligence Service’s (CSIS) abilities to “disrupt” suspected terrorist activities online, and make it illegal to “promote” terrorism.

At midday, Prime Minister Stephen Harper hosted a news conference in Richmond Hill, Ont., where he explained to a jubilant crowd the need for these new laws. “Over the last few years, a great evil has been descending upon our world, an evil which has become more and more powerful: violent jihadism, motivated by extremist distortions of Islam.” He went on to cite recent terrorist plots that had been foiled by Canadian police forces: The Toronto 18’s attempt to bomb the CN Tower and kill Members of Parliament in 2006, and the plan to derail a Via Rail train in 2013. “But recent terrorist attacks here and around the world have shown us that as the terrorists refine and adapt their methods, our police and national security agencies need additional tools and greater co-ordination.”

However, critics and members of the Muslim community warn the bill’s provisions will lead to more harm and unintended consequences, especially when it comes to dealing with radicalized offenders.

Even before its contents were made public, the bill had been subjected to scrutiny from civil liberties groups and lawyers, who said it would impede freedom of expression and religion.

Outrage toward the bill mounted throughout the day. The British Columbia Civil Liberties Association, which is suing the federal government over its surveillance programs, released a statement saying: “Canada has utterly failed to respond to the urgent need for national security oversight and instead, proposes an unprecedented expansion of powers that will harm innocent Canadians and not increase our public safety.” The group says it’s especially concerned about the provision that will allow police to detain people who haven’t been charged for longer periods of time.

Hamed El-Said, an advisor to the UN Counter Terrorism Implementation Task and author of the book New Approaches to Countering Terrorism released earlier this month, said in an interview that the laws Canada already has on the books are “more than enough to deal with terrorism.” And new criminal offences coupled with more powerful police forces will likely translate to more convictions that carry long prison sentences.

“New legislations like this will fill up the Canadian prison system,” he said. “The number of inmates will only go up.”  Having conducted research on radicalization in prisons around the world, he says the chances of people becoming radicalized, when they weren’t so already, can increase when they are convicted and imprisoned for crimes around freedom of expression.

Terrorism and radicalization do not end with a prison sentence. Yasin Dwyer, a Muslim imam from Hamilton, Ont., who recently left his post as Canada’s only full-time prison imam after 11 years, says what’s missing from the government’s counter-terrorism approach is a robust counter-radicalization program inside prison. “For every criminal offence, there has to be a rehabilitation program related to that offence. The government is only looking at the punishment model, not the rehabilitation model,” he said. “If we want to be tough on crime and tough on the causes of crime, there has to be a balance.”

Dwyer, who worked with imprisoned members of the Toronto 18, says without an appropriate number of qualified Muslim chaplains and programs that address and reverse the ideology of radicalized offenders, time in prison can be counter-productive. After one of the Toronto 18 members, Ali Dirie, served his sentence for his involvement in the terrorist plot was released in 2011, he left to fight with rebel forces in Syria, where he was eventually killed.

According to a 2010 report on prison radicalization in Canada from the Macdonald-Laurier Institute, 14 Canadians were incarcerated in the country for facilitating, sponsoring, and/or organizing terrorism. The report notes a “slow but deliberate increase in the number of terrorism-related incidences and incarcerations in Canada over the past five years.” Since then, there have been several high-profile arrests and convictions. Most recently, 24-year-old Ashton Carleton Larmond and his twin brother Carlos were arrested in Ottawa and Montreal early this month and are now facing terrorism-related charges.

“These laws pander to a desire to be tough on crime in ways that have been proven do not work,” said Ingrid Mattson, Chair in Islamic Studies at Western University’s Huron College and founder of the first accredited Muslim chaplaincy program in the U.S. “What does the government want the outcome to be for these people in detention? If they are at some point going to be released, we need to think of lasting ways that will create law-abiding people.”

El-Said points to governments programs in Australia and Singapore that collaborate with Muslim citizens to curb the threat of terrorism. “I truly believe that what Canada needs is not rules that undermine freedom of expression or result in powerful security officials,” he said, “but improved and organized engagement with the Muslim community and dealing with the causes of terrorism in Canadian society.”