Are Canadians bribing their doctors? Tell us your story.

Despite reports to the contrary out of Quebec, Canada's colleges of physicians and surgeons say bribery isn't a problem 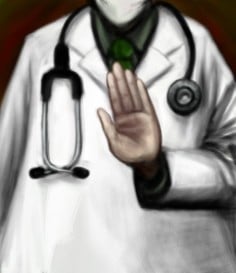 Any good thriller needs great characters to succeed. And the cast in Quebec’s still unfolding pay-for-play medical scandal are certainly that. On the one hand, you have the accuser, Valery Fabrikant, a notorious murderer enjoying a second life in prison as a litigious scourge. On the other, you have Andre Pasternac and Mark Eisenberg, respected cardiologists accused of committing a very un-Canadian sin: taking kickbacks to influence Fabrikant’s care.

The details of the plot are so juicy they may obscure the real story here. In the days after the Montreal Gazette broke the news that Pasternac and Eisenberg face disciplinary hearings over their conduct, the paper says it was flooded with other tales of patients paying off doctors. It isn’t the first time, either. The Gazette‘s Charlie Fidelman first reported on this story in 2010. Then too, she received tips from numerous patients who say they were asked to or did pay to move up waiting lists. At least one “prominent” doctor told Fidelman the practice was “systemic” in Quebec and “an open secret.”

The Fabrikant story, given his history, has obvious appeal. But the real question here is how widespread, if at all, the pay-for-better-care practice really is, and not just in Quebec. Over the last week, Maclean’s contacted the nine colleges of physicians and surgeons outside that province. None reported ever having dealt with a disciplinary case involving physician bribery. Most also said they could not recall even a single complaint alleging that kind of behaviour. (An official with the Ontario college says it receives too many complaints—hundreds every year—to say for sure.)

But that doesn’t mean bribery, payoffs or lavish gifts aren’t happening. When the Quebec story first broke, the medical college in that province also pleaded ignorance. At that point, the board’s main investigator, Francois Gauthier, had not had a single complaint of that nature, president Charles Bernard told Fidelman. If that was true, they would have been “among the few Montreal physicians who had never heard of this practice,” Margaret Somerville, the director of the Centre of Medicine, Ethics and Law at McGill wrote in an Op-Ed. Some physicians receive huge “gifts” from wealthy patients in return for a promise to be available to them at all times, Somerville wrote. Others take thousands of dollars to secure faster surgeries for their patients or to ensure an obstetrician will be present when a patient gives birth, another doctor told The Gazette.

After those stories first broke, the Quebec college openly pleaded with patients and doctors to come forward with examples of bribery or kickbacks. Fourteen months later, they announced disciplinary hearings for Pasternac and Eisenberg. Both doctors are accused of taking “gifts” of $1,500 and $5,000 according to court documents published by The Gazette. The money was eventually returned. Complicating the case is that the accuser, Fabrikant, is a murderer—he shot four colleagues dead at Concordia University in 1992. Since being locked up, he’s made a career of frivolous lawsuits and legal complaints. So much so that it might be tempting to dismiss any inquiry involving him as farfetched in the extreme. ( The Quebec college has denied Fabrikant standing at Pasternac and Eisenberg’s hearings.)

Still, given the volume of complaints unearthed by the Gazette, it’s hard to dismiss the whole issue as the ravings of a lone nut, especially in Quebec. As for the rest of Canada, that’s where you come in. Maclean’s wants your stories. If you’ve ever been asked to pay extra for a medical service covered by medicare, or to move up a waiting list, get a consultation or anything else that sniffs of a bribe, kickback or dodgy payment, we want to hear from you, wherever you live. Send me an email at richard.warnica@macleans.rogers.com and let me know what you’ve seen or heard.