A Nova Scotia man once banned from a B.C. hotel for letting pepperoni-feasting seagulls destroy his room claims Maritime gulls would never do that. An ornithologist says otherwise. 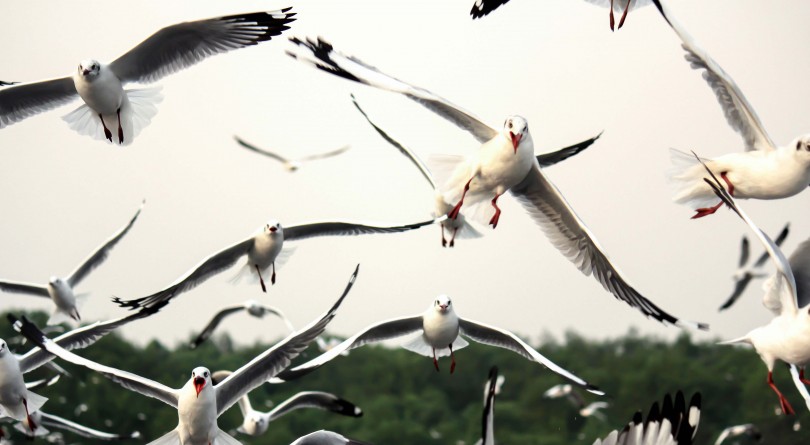 Seventeen years ago, Dartmouth. N.S., native Nick Burchill was visiting the west coast when he left an open suitcase full of pepperoni on a table by his hotel window—in hopes the cool Victoria air would be a good substitute for the lack of a fridge in his room.

Instead, after heading into town for a couple hours, Burchill returned to a room full of several dozen seagulls gorging on his suitcase meat. Upon his return, the birds started flying everywhere, destroying furniture and tearing curtains down in the process. In retrospect, Burchill grabbing a live seagull in a towel and lugging it through the hotel lobby probably wasn’t the best look for any passing tourists.

Burchill was soon blacklisted from Victoria’s Fairmont Empress hotel for nearly two decades until he recently returned to apologize and make amends. In Burchill’s own defence, the Nova Scotia local told the CBC, “East coast seagulls aren’t that brazen. They’d never come into a room or do that sort of thing—at least I don’t think they would.”

Could this be true? Are Maritime gulls equally as laid back as the citizens of Atlantic Canada, compared to the bold and shameless seagulls of the west? Would east coast seagulls have left the pepperoni to its rightful owner?

Maclean’s asked one of the country’s leading ornithologists, the aptly named Dr. David Bird, an emeritus professor of wildlife biology at McGill University, to look into the maritimer’s claim. Here’s what he said, condensed and edited for clarity:

I’ve been on both coasts—mostly visiting the east coast and I now live on the west coast. I did some research and first looked at what gulls would be most likely to go after pepperoni—and I chose Victoria versus Halifax.

Ninety-five per cent of the gulls in Victoria are called glaucous-winged gulls. They would be the pepperoni snatchers. I’m not at all surprised if you left pepperoni out there, [they’d notice it] with that smell. A lot of people think birds can’t smell, but that’s not true. The turkey vultures I have soaring around my house are among the best smellers in the business, but gulls are pretty good too.

With a pepperoni smell wafting into the air and all those gulls, all it takes is one bird to find the food and—I don’t know why they do this—they go into a frenzy and basically make a lot of noise to bring their buddies in. I don’t know why one wouldn’t just keep it all to himself, but once one found it, they make a lot of noise, the others come in and I’m not surprised they went nuts.

On the east coast, you’ve got mostly herring gulls. It’s a different species, but I looked at the diet of both those birds and they pretty much eat about anything they can get down their beaks. They are both omnivorous and pepperoni would be pretty high on their list of tasty things to eat.

Maybe Halifax gulls have their own feeding spaces that would keep them away from a major hotel downtown. But the city has the same problems with boisterous pooping gulls everywhere. A couple years ago, they hired a falconer with a hawk to scare them away from the city centre.

Bottom line: if someone put out a suitcase of pepperoni at the right time of year—the key is it has to happen when the gulls are flying around—when the first gull found that thing, it’s a feeding frenzy. I would disagree with [Burchill] that the Maritime gulls would dismiss a picnic of pepperoni on a balcony. Gulls are gulls.