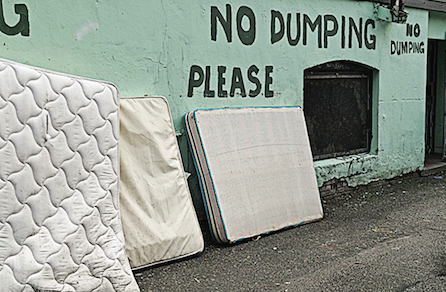 It turns out, free stuff piled on the side of the road isn’t actually free. Chairs, tables and TVs plastered with “free” signs cost taxpayers in the Victoria area $330,000 to clean up in 2012. Vancouver spent $1 million. Now, as university and college students prepare to move house at the end of the term, Victoria is eager to head off another spike in student detritus, part of the 650 tonnes of abandoned waste the city hauled away last year.

The Capital Regional District and the University of Victoria student society have joined in a campaign aimed at reducing the heap of household items going to landfills by 15 per cent this year, partly through proper recycling. Emily Rogers, the student society chairwoman, says a few hundred students stopped by tables set up last week for the “Junk It” campaign. But getting a car-less student to take her junk to the dump will be tough, she says, noting, “You can’t take your couch on the bus.” There are, of course, numerous private disposal businesses eager to do the job, but that costs money and it’s something students and their parents have either been unable, or unwilling, to shell out for.

Another problem in the quest for cleaner streets: the curbside economy, in which people scour for free cast-offs. Websites such as Craigslist regularly feature “curb alerts.” Rogers offers caution, though: “For every treasure on the side of the road, 25 pieces of junk are decomposing.”