Life during wartime: We're all witnesses to war

The death of Cpl. Nathan Cirillo will affect how we view our military—and the sacrifices of those to come 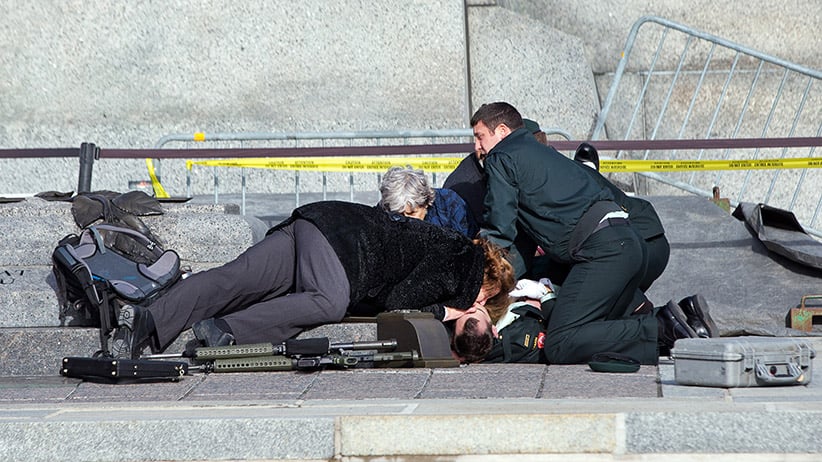 They came together with haste and purpose. Three civilians and two members of Canadian Forces, all working frantically to save the life of Cpl. Nathan Cirillo.

In the first minutes after the Hamilton reservist was shot twice at Canada’s National War Memorial on Oct. 22, it was passersby who joined in the challenge of trying to staunch the bleeding and keep his heart beating. Photos captured their desperation. A red-headed woman, her legs stretched out across the Tomb of the Unknown Soldier, administering artificial respiration while a uniformed man performs CPR. A man in a dark business suit helping to keep the blood where it was needed by holding the kilted Cirillo’s bare legs in the air. And two more—a grey-haired lady and a man in an army beret—applying pressure to his wounds. All of them as anonymous as the fallen combatant inside the granite sarcophagus that the soldier was guarding.

A discarded backpack leans against the tomb, next to a Thermos mug of morning coffee. A black attaché case has been tossed to the flagstones. Right beside that lie the two military assault rifles—one belonging to Cirillo, the other his regimental partner—perfectly stacked, stocks tucked tight against the brass foot of the monument. By the book, even though they were never loaded, per standard honour detail practice.

Attacked on hallowed ground, targeted simply as a symbol, the tragedy of Cirillo’s death resonates across the country and around the world. In life, the 24-year-old represented little of what presumably stoked the rage of his killer, Michael Zehaf-Bibeau. A part-time soldier, he had never served overseas. Single father to a six-year-old boy, he made his living as a fitness trainer and working in bars. By all accounts, he was a friendly, kind and happy man. But his passing, in the very shadow of a cenotaph dedicated to the warriors of our increasingly distant past, in the arms of average citizens, will almost certainly affect how we view far fresher sacrifices—and those that loom in the future.

Related:
Two killers, one twisted objective
Martin Couture-Rouleau: A homegrown madman
David Frum on the allure of radical Islam in Canada
Interactive: An audio and visual timeline of what happened in Ottawa

As Canadians we have largely agreed upon a comfortable narrative surrounding the deaths of over 68,000 in the First World War, 47,000 in the Second World War and 516 more in Korea: Brave fathers, uncles, grandfathers and beyond, who perished in the service of freedom, or at least a cause that a vast majority of their fellow countrymen and women believed in.

What has happened over the past 13 years however, is a far trickier proposition. Shocked to the core by the events of Sept. 11, most Canadians endorsed the idea of rooting out the terrorists and their protectors in Afghanistan (even as a Liberal government drew the line at joining George W. Bush’s “Coalition of the Willing” against Iraqi dictator Saddam Hussein). But after 9½ years of combat, resulting in 158 military deaths, that consensus crumbled. If we are to be honest, the sacrifices of Canada’s Afghan dead are honoured, but not necessarily understood, or even appreciated. Why then? Why there? Just what were we trying to accomplish? The same sort of questions swirl around the country’s latest contributions to the ever-lengthening war on terror—an international air campaign against the forces of Islamic State in Iraq and Syria.

In the almost 50 years between the end of the Korean conflict and Canada’s next war, the country came to embrace a different vision of what soldiers, sailors and flyers were supposed to do, one that stressed preventing conflict rather than participating in it. We even built a separate national monument to our peacekeepers, a few blocks north of the War Memorial, in the sightlines of the American Embassy. Entitled Reconciliation, it features a quote from Lester Pearson, former prime minister and winner of the Nobel Peace Prize.

The reality, however, is that the days of our Canadian Forces donning sky-blue helmets and patrolling international no-man’s lands are long gone. As of this September, there were just 21 Canadian soldiers assigned to United Nations missions. And Canada’s overall peacekeeping contributions, including police and experts, totalled 118 people, ranking us 65th among UN member states. In contrast, by the end of this month, 600 Canadian Forces troops will be on the ground in Iraq to run and support an initial six-month air combat mission.

The Canadian public and its military have been out of sync over duties and mission for more than a decade. It is a gap that doesn’t make much sense. In the aftermath of 9/11, we have come to venerate first-responders—those who run toward danger—as local police, the RCMP and Parliament Hill security did in their shoot-out with Zehaf-Bibeau. But we remain slightly suspicious of the motives of people who volunteer to serve in the army, navy and air force, as if there is something nobler—and more Canadian—in playing defence than being on the offensive.

The events of the past week illustrate that we live in an age where such distinctions have been rendered meaningless. First the murder of Warrant Officer Patrice Vincent, run down by ersatz jihadi Martin Couture-Rouleau in a shopping mall parking lot in St-Jean-sur-Richelieu, Que. And now the death of Cpl. Cirillo at the hands of another “self-radicalized” fellow citizen. Like it or not, Canada is in this fight, abroad and at home. Facing enemies who don’t give credit for past good deeds, and have few, if any scruples about whom they target.

There’s a tradition that has sprung up in Ottawa over the past years. After the conclusion of the official Remembrance Day ceremony, members of the public approach the War Memorial, remove the poppy from their lapels, and lay them on the Tomb of the Unknown Soldier. It’s a small act of respect, and an attempt to connect with our fading, black and white past.

This year will be different. Not just because Nathan Cirillo died at that very spot, but because of what happened in his final moments. When a red-headed lawyer, a grey-haired nurse and a suit-clad government bureaucrat joined with a colonel and a corporal to try and save a soldier’s life, a page turned. The sacrifice, in fullcolour and public view, can’t be ignored. Everyone has become a witness. It is part of our present, and our uncomfortable future too.