Behind the scenes on our Bowie-inspired Chris Hadfield cover

Why we gave the astronaut the rock-star treatment

After Chris Hadfield’s command of the International Space Station made him a global celebrity, Maclean’s thought it was only appropriate to give the astronaut the rock-star treatment during our recent cover photo shoot.

“He went full-bore with it. I explained we needed bare shoulders as opposed to the collared shirt he was wearing, so he happily took it off,” says Wahl, who ensured the lighting during the shoot also matched Bowie’s album perfectly. “He was fully participating—it was awesome. I was on a portrait high for a day and a half afterward.” 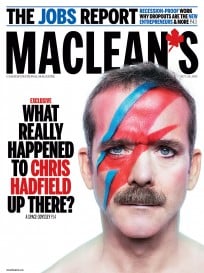 Good Morning Earth: The inside story of Canada’s first space station commander
A photo tour of NASA with Chris Hadfield
An interactive exploration of the Hadfield universe