Behind the veil: Zunera Ishaq on her controversial niqab 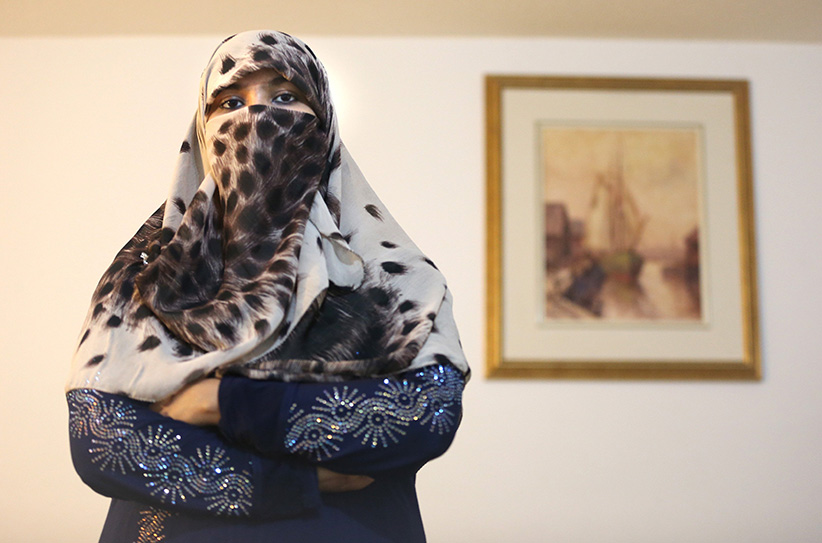 Zunera Ishaq suggests her case is a distraction. “I can’t understand why the state is making it a big issue and such a political environment, when so many other things need to be taken care of,” she says. And yet her case is now a matter for the federal election campaign.

Ishaq is the Toronto woman who, in 2014, challenged the government’s policy that those attempting to complete their application for citizenship be required to fully display their faces when swearing the citizenship oath. Ishaq, originally from Pakistan and a permanent resident of Canada since 2008, has worn a niqab since she was 15 as a matter of her Muslim faith. Although she says she is willing to lift her veil to confirm her identity, she refuses to do so during the public citizenship ceremony. The government’s policy dates to 2011, when then-immigration minister Jason Kenney announced a new rule that would ban face coverings during citizenship ceremonies, both to ensure that new citizens were saying the oath and because saying the oath is a “quintessentially public act” that must be taken “freely and openly.”

That this has become a prominent election issue is, in part, a matter of timing. A Federal Court judge struck down the government’s policy in March. The government appealed that ruling, but, last week, the Federal Court of Appeal heard arguments and quickly upheld the earlier result. The federal government then announced it would be asking the Supreme Court to take up the case.

Though Ishaq asserts that being forced to unveil would violate the Charter of Rights and Freedoms, the judges have not actually had to rule on the Charter to dismiss the government’s case. Rather, Justice Keith Boswell ruled that the ban contradicted a regulation requiring citizenship judges to “administer the oath of citizenship with dignity and solemnity, allowing the greatest possible freedom in the religious solemnization or the solemn affirmation thereof.” The government has, unsuccessfully, tried to argue that the ban is not absolute, and that citizenship judges retain the authority to make allowances for anyone who insists on covering her face.

Even if the Supreme Court upholds Boswell’s ruling, the Conservatives have vowed that they will, if they remain in government, move forward with legislation to confirm a ban. “As the Prime Minister has said, most Canadians find it offensive that someone would hide their identity at the very moment where they are committing to join the Canadian family,” Conservative Denis Lebel said in announcing the government’s appeal. Liberal Leader Justin Trudeau said he would not continue with an appeal if he becomes prime minister. “Any time a government or a leader is in a position to choose to limit minority rights of any type, there has to be a very good justification—a clear and compelling reason to do so,” he said last week. NDP Leader Tom Mulcair has accused Prime Minister Stephen Harper of playing a “very divisive game” with the issue and that the “courts have spoken in this case.”

Public opinion surveys do show a high degree of support for banning the niqab during the oath; 72 per cent of respondents to a Vote Compass survey this month disagreed with the suggestion that “immigrants should be allowed to cover their faces for religious reasons while swearing the oath of citizenship.” But Ishaq says those who support a ban are poorly informed and don’t understand that identiﬁcation is not the issue: She has agreed to identify herself to female officials in relative privacy in other situations. And if the concern is ensuring that Ishaq says the oath out loud, she says an official could simply stand near enough to hear her say it.

She figures the Conservatives are playing politics with the matter and wonders why the Prime Minister would bother himself with it. “Why is it so important to him to continue playing with this issue? It is only an individual’s right—or you can say an individual’s opinion—that he or she wants to dress up in a certain way,” she says when asked if she’d like to talk to government ministers about the matter. “The state’s business is not to describe the guidelines for the people how they should dress up. The business of the government or the state is much more than that. Why don’t they actually mind their own business and let me dress up in a way in which I want to?”