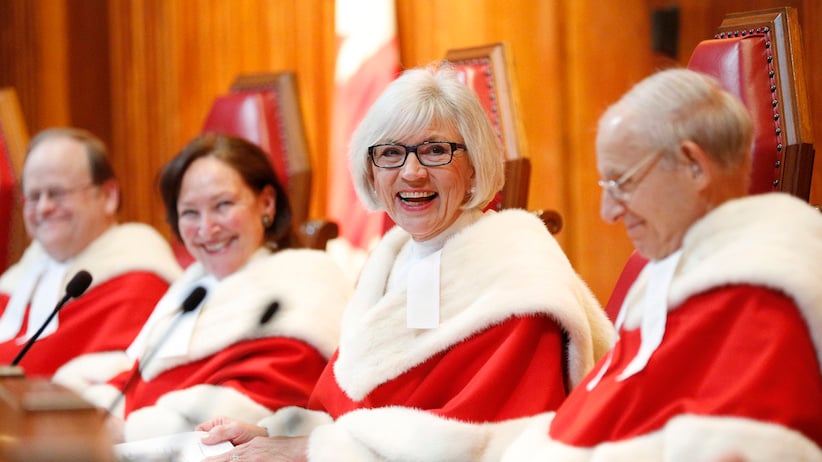 Beverley McLachlin didn’t cry only because it’s over; she cried in part because she’s too realistic to believe that the best is yet to come. “Whatever lies ahead, I know that my time here will always be the centrepiece of my life,” she said, speaking for the last time from the bench of the Supreme Court of Canada. She had eight more minutes at this vantage point, overlooking the full pews, ruby carpets and walnut doors.

McLachlin has heard 2,158 appeal cases in this courtroom, retiring on Dec. 15 after serving as chief justice for the majority of her 28 years on the bench. During her final hearing, the last lawyer left the podium, and all of a sudden the court did not adjourn, but instead the other justices paid tribute to a jurist who is “uniquely wise everywhere.”

McLachlin humbly disagreed but in these circumstances let false statements slide, and she herself spoke with emotional bias and unfounded superlatives of gratitude. She was still sitting at centre-bench, and she will still have a say on decisions of previously heard cases, but for her last minutes in the courtroom, McLachlin stopped being a judge.

“Bev,” Justice Rosalie Abella addressed her, “or if you’ll permit me to call you by your first name: Chief.” On behalf of all the other justices, Abella thanked McLachlin for redefining the job, as she chaired the advisory board of the Order of Canada and demanded Canadians have better access to justice. McLachlin would visit schools and bar associations, and she’d put Hamlet on mock trial at the Stratford Festival aside from authoring 519 judgments in her Supreme Court career.

READ MORE: How Beverley McLachlin changed the face of the Supreme Court

“Far more than ever before, the ivory tower, or the judiciary tower, that’s gone,” says former justice Frank Iacobucci. “Not that judges should be on the rubber chicken tour all the time, but they should get out and they do.”

In the room on McLachlin’s last day was Frank McArdle, “the most supportive husband in the whole world,” Abella described him, who in 1992 married a woman with quite some homework. “Thank you for loving her so deeply and so selflessly,” Abella told him. “Frank, you have no idea how many domestic quarrels in our house have started with the phrase, ‘Frank would never have done that.’ ”

The Chief tried to discredit the praise from the other eight-ninths of the bench. “But on this particular occasion,” she said, “I’m prepared to accept the most credulous statements.” She thanked the lawyers, the country, and her fortune for being made a judge one year before the adoption of the Canadian Charter of Rights and Freedoms.

“We expect criticism. We often get it, and that’s good in a democracy,” she said. Under McLachlin, the court made landmark judgments affecting areas ranging from freedom of speech to same-sex marriage to rights for Indigenous peoples. “In every one of these areas, there’ll be a leading case from her,” says Iacobucci. In 1988, she and the other justices struck down Canada’s law that restricted abortion, and amid questions of Quebec secession a decade later, clarified what it means to be a nation.

“Clearly one of the most significant figures in Canadian judicial history,” former Supreme Court law clerk Malcolm Lavoie describes her. “One of the leading architects of our approach to the Charter of Rights,” adds Lavoie, now a law professor at the University of Alberta.

With unanimity as one of her priorities, McLachlin’s court wrote judgments and references on assisted suicide, prostitution and Senate reform, and in striking down the appointment of federal court judge Marc Nadon, whom the justices argued was not qualified to serve on the Supreme Court at the time, McLachlin and the other justices directly stood up to former prime minister Stephen Harper.

Yet, the Chief on her last day struggled to finish a sentence, thanking sixth graders who recently sent her a Christmas card made from a cardboard box. “It’s the best Christmas card I’ve ever had.”

Her son was absent, but she smiled and fought back tears to talk about the boy “who was 13 when I came, and put up with mom as a judge.” She thanked her husband for incomprehensible devotion. She declared she had only three more words, and she delivered them. “Court is adjourned.”