Black people who moved to Canada in the 1800s were promised land in Nova Scotia in exchange for staying loyal to the British crown. Instead, the province granted informal licences to live on the land, not own it. 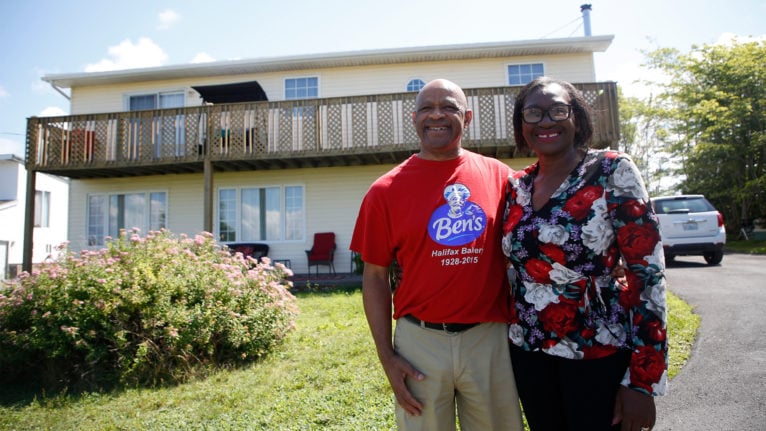 Downey, and his wife, Chrissy, were granted the title to their land 18 years after building a home (Tim Krochak/CP)

Twenty years ago, Christopher Downey began building his house on the land where his family had lived for generations in North Preston, a historically Black community northeast of Halifax. He cleared the brush, drew up plans and applied for building permits. Then he started running into problems.

Like many others in North Preston, Downey, who is now 66 and works for a natural gas company, didn’t have the title to the land. That’s because he’s a descendant of a Black American who was promised land in Nova Scotia in exchange for fighting for the British in the War of 1812, yet never received it, according to family lore.

The province followed through on that promise with deeds for white settlers, but only gave Black people informal licences to live and work on the land, not own it. While the white people who settled in Nova Scotia after staying loyal to the British built equity in their properties and passed their wealth on to their descendants, Downey was stuck struggling to convince officials to let him hook his home up to the sewer system almost 200 years later.

“We couldn’t get the electricity, plumbing, all the basic needs,” says Downey, who took the issue to court. He says his entire life would have been different if his ancestor had been granted title: “We could have actually probably obtained a loan from the bank to live a better, more comfortable life than what we were accustomed to growing up.”

A July decision by the Supreme Court of Nova Scotia in his favour took a small step toward righting that historical wrong, setting a precedent that will help other Black Nova Scotians making similar land claims. The province must now stop denying land claims made by people who can’t prove they’ve lived on the land for 20 consecutive years, a policy of the Nova Scotia Department of Lands and Forestry that the court found poses an unreasonable barrier to claimants.

Jamie Campbell, the judge who heard the case, wrote in his decision that the issue of unclear title to land faced by many Black Nova Scotians is a clear example of systemic racism. “African Nova Scotians have been subjected to racism for hundreds of years in this province. It is embedded within the systems that govern how our society operates,” Campbell wrote. “That is a fundamental historical fact and an observation of present reality.”

That sweeping declaration is no less significant than the key precedent set by the case, says Isaac Saney, an expert in Black Canadian history at Dalhousie University.

“This is a landmark case,” Saney says. “Acknowledging the overall impact of racism and disenfranchisement and marginalization that has come out of these communities is incredibly important.”

READ: ‘I don’t care whether All Lives Matter is said in ignorance—it’s just another example of racism’

In an emailed statement, Lands and Forestry spokesman Brian Taylor said the department will no longer apply the 20-year residency test when assessing land claims and will review past cases to ensure anyone whose claim was denied on that basis gets their title. It’s unclear exactly how many Black Nova Scotians are living without titles to their land, but the province has received more than 360 claims through a program implemented in 2017. “We will continue to look for ways to streamline this process and remove barriers wherever possible,” Taylor says.

Downey says the process was anything but streamlined. He says no one told him he had to have lived on the land for two decades when he applied for the title. Downey left North Preston in 1982 to raise his family in Toronto after having trouble finding work in the community.

“I don’t really know how these people came to the decision where they would actually reject my claim,” he says. “It made no practical sense.”

What Downey encountered, though, is an example of the obstacles and red tape created by the very legislation and programs that are supposed to help address the land-access issue, says Saney, the Dalhousie professor. Downey’s court win strikes down one barrier, but many remain.

The Land Titles Clarification Act, the 1963 piece of legislation Downey used that was designed to give Black Nova Scotians a process for making land claims, is widely criticized as complicated, expensive and time-consuming. In 2017, the province set up a $2.7-million program to help residents of historically Black communities with legal fees and other costs related to land claims, but Saney says that’s not nearly enough money.

“You have families that have been there for generations upon generations, whose ancestors played an important role in building Nova Scotia,” he says. “Why couldn’t the government find a more efficient way simply to grant them land?”

Still, Downey’s court win means a lot to him personally. Owning the land his house is on eliminates small headaches, like applying for a permit to build the garage he wants. It also might eliminate bigger ones in the future, with many in the community worried about developers eyeing property that has risen in value as Halifax sprawls ever further into surrounding lands.

Plus, Downey says, it feels good to know he may have made the process easier for the next person in his community making a land claim. “It’s really a burden that could be lifted off any individual’s shoulders,” he says. “I feel elated.”

This story appears in print in the October 2020 issue of Maclean’s magazine with the headline, “This land is your land.” Subscribe to the monthly print magazine here.