Brent Robson: The point man on the scramble to repatriate Canadians

When civilian travel ground to a halt last year, Brent Robson led efforts to bring Canadians home from the far reaches of the planet 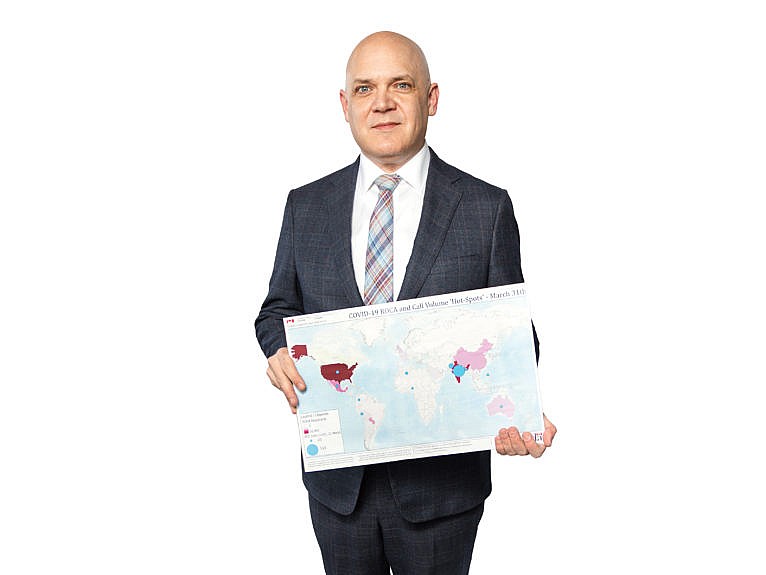 Brent Robson, Director of Emergency Operations at Global Affairs Canada. This portrait was taken in accordance with public health recommendations, taking all necessary steps to protect participants from COVID-19. (Photograph by Sarah Dea)

As emergency response director for Global Affairs Canada, Robson typically does low-key work, running an Ottawa response centre that helps people abroad with lost passports or other problems. Crises arise one foreign country at a time, with Canadians getting caught up in, say, a localized natural disaster or a terrorist attack. But last March, he became commander of a sprawling effort unfolding simultaneously across more than 100 countries, his attention endlessly redirected from one logistical complication to the next. The pandemic all but shut down an entire planet’s civilian travel system. Robson had to help get more than 57,500 people home.

He’d spent most of his federal career doing consular affairs work in Africa, Asia and in the United States—fortunate, because the pandemic rescue mission effectively converted the entire Global Affairs department into a harried consular affairs operation. His tiny team grew to 1,000 people, many in a round-the-clock call centre fielding hundreds of anxious inquiries a day. Others coordinated with on-the-ground diplomatic teams and airlines that dispatched hundreds of charter flights to bring home tourists, international students and workers stuck abroad.

It went far beyond the work Robson’s team did in January and February 2020 in repatriating a few hundred Canadians affected by the outbreaks in Wuhan and on a couple of cruise ships. They had to expand the effort to pretty much everywhere on Earth that Canadians were—which was pretty much everywhere. And it started on March 16 with one “big bang”: Prime Minister Justin Trudeau warning all Canadians to hurry home, before they’d be unable to. “I’d say within a week we had the flight model up and working, we were engaging our missions to come up with creative solutions to a whole series of lockdown challenges,” Robson recalls, “and we were full into repatriation mode.”

To handle his team’s mushrooming size—and to cope with the then-new dictates of physical distancing—his team took over much of the Lester B. Pearson Building, Global Affairs’ headquarters in Ottawa. He describes it as “organized chaos”: so much happening all at once, but everyone knowing their role. François-Philippe Champagne, then the minister, even joined in as a virtual travel agent, negotiating Canadian airplane landing times in some locked-down countries.

On July 17, the final flight returned 165 people from Trinidad and Tobago. The leadership challenge of Robson’s career had wound down, after four exhausting months. “I’m just waiting for some of these restrictions to lift,” he says now. “Maybe get back on the ski hill, get my adrenalin rush that way. Something a little more controlled.”