Emerging from the Fort McMurray fire, Wildrose Leader Brian Jean is determined to prove he is also the new face of conservatism in Alberta 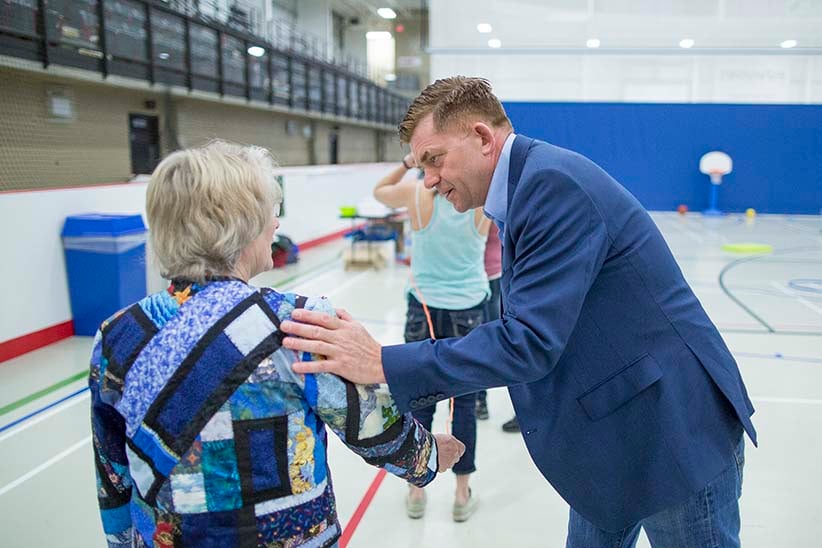 Brian Jean, Leader of the Widllfrose, the Official Opposition and MLA for Fort McMurray-Conklin talks with an evacuee at the Bolt centre in Lac Le Biche. AB on Saturday,, May 08, 2016. (Photograph by Chris Bolin )

Hair neatly parted, striped tie in a thick full Windsor knot, Wildrose Leader Brian Jean clasped his hands in his lap in the CTV Morning Live armchair, for his first Edmonton studio visit since, a week earlier, wildfire decimated his Fort McMurray constituency. The host asked her first question with a spot of hesitation: “The question I think a lot of people just want to know: how are you doing?”

In most any circumstance but this one, it would have been an unthinkable question for a politician. But on that May 3 night, as everyone else was evacuating from his home town, Jean was in a pickup truck darting toward it when his nephew phoned: the party leader’s house was going up in flames, along with his entire Fort McMurray neighbourhood. Inside that home were his photos, clothing, Father’s Day cards and other keepsake reminders of Michael Jean, his son who died at age 24 a year earlier, just as the former Conservative MP was reinventing himself as a provincial party leader.

So the question seemed apt: how was Brian Jean doing, a week after being stripped of a second fundamental element of life—family, then shelter—in 14 months?

“I’m doing fine,” he told the morning show. “What’s really important is the 80,000-plus people that I represent and where they are and how they’re doing. Traumatic experience, certainly emotional . . . they’re doing a lot better, but they’re still suffering the consequences.”

An Edmonton Journal headline dubbed Jean an “unsung hero” of the wildfires, rivalling Premier Rachel Notley’s generally lauded leadership during the natural disaster and humanitarian crisis. It’s not the reassuring or galvanizing performance that Calgary Mayor Naheed Nenshi put in during the 2013 floods, or the thumbs-up dependability of Darby Allen, the fire chief in Fort Mac—and with more media exposure for Jean in any time since last spring’s election, much has been sung by him and about him in recent weeks. And one of his first pronouncements in crisis was erroneous—going off bad information in the fog of disaster, Jean told the Canadian Press the city’s hospital was on fire, which badly overstated the fire’s reach.

Political leaders are commonly thrust to the forefront in trying times, but they normally quarterback or communicate; they don’t personify the tragedy. Seldom are they the sort of protagonist Brian Jean has become. When he talks about the 90 per cent of Fort McMurray that’s been spared the devastation, we know he’s in the minority that wasn’t so fortunate, with his house and five other Jean family properties reduced to fenced-off rubble. When he publicly highlights the struggles of his constituents, he’ll mention too the “anxiety of my friends, my family.”

Notley has been courteous thus far: her office granted him full access to the evacuated city, and her side of the aisle stood to applaud Jean’s first post-fire reappearance in question period. In several televised appearances and interviews, his emotions have been close to the surface. When Notley announced the long-awaited re-entry timeline to Fort McMurray—starting June 1—and the region’s mayor expressed gratitude and stressed the safety precautions for returnees, Jean was invited to the lectern to share his thoughts and fight back his tears. “We will rebuild our city better than it’s ever been before,” he said. “I will stand beside you” (pause, a big gulp for breath to finish the sentence’s last five words) “every step of the way.” 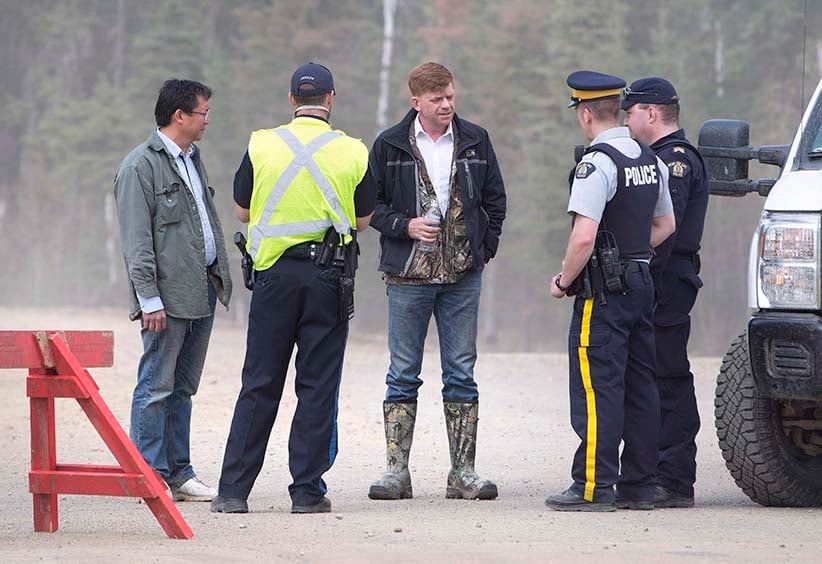 Alberta Wildrose Leader Brian Jean, centre, talks with police near a wildfire in Fort McMurray, Alta., on Thursday, May 5, 2016. Jean’s house was burned down in the fire. An ever-changing, volatile situation is fraying the nerves of residents and officials alike as a massive wildfire continues to bear down on the Fort McMurray area of northern Alberta. (Jason Franson/CP)

It’s not just that this has been a 14-month period of tragedy compounding tragedy for Jean, who served for 10 years as a low-profile backbencher behind Stephen Harper. It’s been turbulent politically, as well. Spurred on to re-enter politics because of the health system’s rough handling of his son’s illness, he took over a political party whose former leader, Danielle Smith, and most of caucus had bolted to the governing Progressive Conservatives. In the election weeks later, his party regained official Opposition status as the Tories collapsed and Notley’s NDP rose from nearly nowhere to majority. His Wildrose party has been clearly leading in the polls since last fall, and sit close to majority territory, but you’d have trouble realizing it from all the shuffling and antsiness among conservatives in Alberta. Afraid of the New Democrats once again prevailing over divided ideological rivals, various third-party factions have sprung up to unite Alberta’s right, either through a Wildrose-Tory merger or through a brand-new party. Underlying much of it is the sense among activists that Jean and the Tories’ Ric McIver lack the charisma or leadership chops to restore their version of political sanity to Alberta.

“It’s a general assessment that neither of these guys are the guys to take it to the next level,” said Barry McNamar, a former Wildrose fundraiser who now leads the pro-merger Alberta Prosperity Fund. It’s worth noting McIver is only his party’s interim leader; Jean had his full-fledged position reaffirmed by Wildrose last fall. The 78 per cent vote against a leadership review was not a shimmering endorsement, but also firmly out of the Tom Mulcair debacle zone.

Jean has made some attempts at co-operation with the Tories, but both sides have dug in and resisted the external pressures. In early May, after the PCs elected as president the centrist, anti-merger Katherine O’Neill (a former Globe and Mail reporter), Jean declared any further unity talks futile. He did so in an all-members teleconference exactly two weeks into his city’s wildfire evacuation, because politics don’t wait. He also told members the Wildrose would spend the summer holding cross-Alberta town halls urging all conservatives to unite under the Wildrose tent, and could even help rename the party if that’s what they wanted. “To me, Wildrose ideas matter much more than just the name,” he said. Wildrose allies have legally registered the names Conservative Party of Alberta and Alberta Conservative Party for just such an occasion.

Even in that teletown hall of largely supportive Wildrosers, Jean faced some heat about his job. Marilyn from the Edmonton South–West riding called in: “It appears you’re not confident in yourself as leader to lead this great party to success and you’re not confident yet in having this party being led to success in the next election,” she said. If you do believe Wildrose is the proper vehicle to lead the conservative movement, Marilyn pressed on, “are you going to publicly state that with conviction and passion and courage, and when?”

Jean replied by first reiterating the year he’s had politically, from leadership to election to leadership review vote. “During that same period my son died, my house burned down, and I still worked seven days a week and I’m in the office right now working,” he said. “I’m determined to make Alberta better, and I’m putting aside all my personal issues, all my life, to make sure it will be better for my grandchildren and my children.”

Jean’s caucus is fully behind him, and days before that teleconference the Wildrose executive committee came together with him too, he tells Maclean’s. “Took a group picture afterwards,” he says. Jeff Callaway, the party president, says any leader from outside will face a learning curve, and work through internal debate. He says after the wildfire, the leader has shown others his passion. “I think in the cut and thrust of politics, and day-by-day issue management, I think people don’t maybe see that . . . Brian I think sometimes he—he never was a part-time high school drama teacher, I’ll just put it that way,” Callaway said, a nod at the flair-to-spare style of Prime Minister Justin Trudeau.

Jean acknowledges even his party members now regard him differently. “Now they know who I am and what I’m capable of given the opportunity and the circumstances,” he says.

Recovering from the Fort McMurray fire will preoccupy the Notley government for weeks and months to come, and much longer for the Wildrose leader as his constituent demands balloon. While the premier will have to deal with how the disaster further complicated Alberta’s dismal balance sheet, right-wingers will continue plotting and debating how to topple their “socialist” rivals—and Jean will strive to remain an active player in that conversation. Jean’s crisis management didn’t impress McNamar more than Notley’s did, the organizer says, and there’s no sense of whether this moment proves transformative for either leader. Political turmoil will pale in comparison to the life trials Jean has faced this year and last. But that won’t make the next steps forward any easier for him, be they rebuilding his home or forging a ready-to-govern coalition.