Sky-high house prices are driving people away from Vancouver, leaving a city with no children. Is it too late to solve its looming labour crisis? 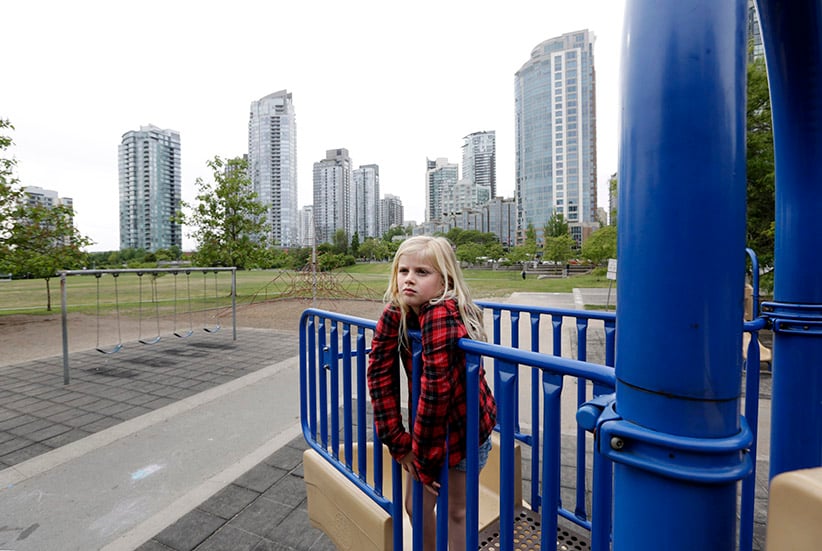 Where have all of Vancouver’s kids gone? (Photograph by Brian Howell)

For a man known as the Condo King—a guy who has moved billions of dollars worth of boxes in the sky, transforming Vancouver in the process, a guy whose influence and chequebook commands the attention of the political elite, a guy with a renowned contemporary art collection scattered amongst the world’s great galleries—this late lunch is pure east-side, working-class. Bob Rennie, a boyish 59, is tucking into a grilled cheese sandwich and tomato soup; albeit it’s a lunch made in a kitchen of the Four Seasons hotel, one of his usual haunts, and a sandwich being consumed with knife and fork. But to his thinking, his values have not strayed from his roots: the Vancouver home on East 5th Ave., which his truck-driver father bought for $7,500 back in the day.

Yet as he sits here on a Thursday afternoon he knows he set a cat amongst the pigeons by delivering a speech hours earlier declaring the the single family home in Vancouver a dying relic of another era. He spent 175 hours researching the speech, which was delivered to more than 1,000 members of the Urban Development Institute, a group of developers, marketers, planners and lawyers who warm themselves at the grate of the region’s overheated housing market. “I think we are in trouble,” he said as he warned the assembled that the status quo is fuelling an affordability crisis that risks turning Vancouver into a drop-in resort destination for the rich—a place like Hawaii, where people invest in the real estate rather than the community.

The city of Vancouver, with a population of about 610,000, is hemmed in by ocean, inlet, river and surrounding suburban cities of Metro Vancouver (which the rest of Canada usually assumes, incorrectly, are part of the municipality of Vancouver). The path to affordability, he said, is densifying Vancouver, dumping the “sacred single-family zoning.” He knows he’ll be accused of self-interest, “a ruse to get more condos.” But with 60 towers in the pipeline to market, he has plenty of business, he says. He knows his idea would see mayor and council impaled upon the white picket fence of the Canadian dream. But while Rennie is a political player, he is not a politician.

There are just more than 47,000 single homes hogging 56 per cent of Vancouver’s footprint. Their values have climbed past reason en route to insanity. “I think there should be a really healthy conversation about alternative forms of housing,” says the condo guy between phone calls and bites of his sandwich. “I say rezone the whole city to townhouse more as an instigator for conversation, but it’s not that stupid an idea.”

Nor is it heresy to say Vancouver may not be the place to raise your kids. Urban flight is already the logical consequence of resisting density, he says. “Nobody is talking about the consequences of our actions. ‘Not in my backyard’— fine,” he says. “ ‘[If ]I want to live in the dying commodity of a single family home . . . I have to acknowledge I am preventing my children and grandchildren from living [nearby].’ ”

There is always a conversation about housing in Vancouver. But with real estate values now at high tide, it has reached obsessive levels. The benchmark price for a typical detached single-family home on Vancouver’s west side is almost $2.5 million; it tops $1 million in east Vancouver, the supposed bastion of the middle and working classes. 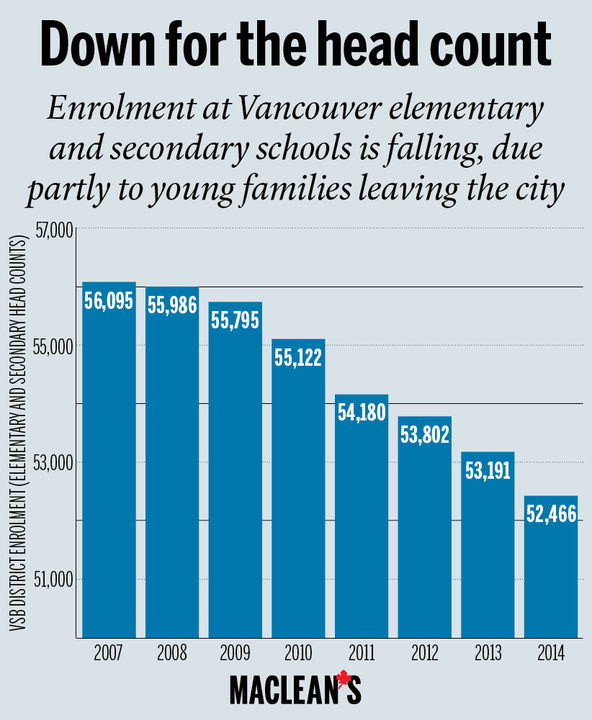 Stoking the debate is a new study by Vancity credit union Vancity. It warns that Metro Vancouver faces a looming labour shortage as Millennials, the next generation of highly educated workers, are driven away by unaffordable housing. Between 2001 and 2014 the average wage rose by 36.2 per cent in Metro Vancouver while the average home resale value climbed by almost 63 per cent. In Vancouver city, house values jumped 211 per cent in that same period. Within five years, the Vancity report said, workers in 82 of 88 “in-demand jobs” (including industrial electricians, civil engineers and general practitioners) won’t be able to afford a single family home in the region. In 10 years only senior managers will have sufficient employment income to buy a house. “At this point, lawyers, electrical engineers and specialist physicians fall off the list.” Vancity also has its roots in east Vancouver, formed in 1946 by 14 families denied mortgages from the big banks. Today clients are shut out of the market by house values accelerating far beyond wage increase, says Vancity’s Andy Broderick, vice-president of community investment.

Children increasingly are a luxury item in a city heavy with apartments and cramped condos. Granite countertops and high-end appliances are essential selling points, but accommodating children and the square footage of second bedrooms, or exceedingly rare third bedrooms, is often seen by developers as a liability. Vancouver joins the ranks of so-called “childless” American cities like San Francisco and Seattle, where households with children have fallen below 20 per cent. Comparable data in Vancouver is hard to find but there are key indicators. Between 2007 and 2014, Vancouver public school enrolment dropped to 52,466 from 56,095, despite overall population growth. Vancouver census data between 2006 and 2011 shows 71,350 children age 14 and under, down 3.5 per cent from five years earlier. Paradoxically, schools in the wealthier west side are bursting while 33 east side schools are at less than three-quarters capacity. Clearly affordability isn’t an issue for some young families, while those buying into the east-side boom aren’t producing the legions of children of generations past. 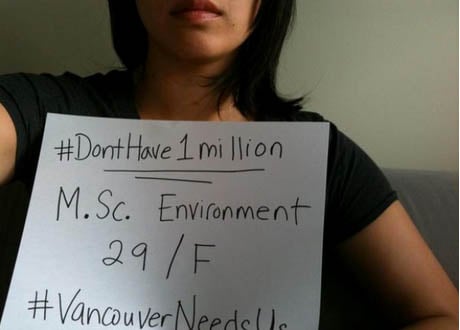 For 29-year-old Eveline Xia, an environmental scientist working for a non-profit, the prospect of remaining in the region where she was raised, hoping to raise a family herself, seems an impossibility. This March she joined Twitter and used her first ever tweet to share her frustration. She posted a photo holding a sign with the hashtag #DontHave1million. “To thrive,” she wrote, “does @CityofVancouver not need people like you and me?” She had just two followers and thought she was shouting into a vacuum. Instead, the hashtag went viral. On May 24 she found herself on the lawn of the Vancouver Art Gallery addressing a rally of several hundred people in the same boat. A week after the rally, she marvels how a little tweet galvanized so many. She’s been dismissed by critics as an entitled Millennial, but she feels vindicated by Vancity’s study. “Housing is a necessity, like food or water,” she says. “I’m not saying everybody should have a house, but right now we have an option between a one-bedroom condo or a house, and there’s very little in between to raise our families.”

What triggered the runaway housing market is a matter of debate. Often blamed is foreign investment, predominantly from China, though Rennie says foreign buyers account for about three per cent of purchases of recent lower-value condo towers he has marketed. Most buyers are locals.

Measuring the scope of another bugbear—investment houses and condos that sit empty­—has been frustrating, says Mukhtar Latif, Vancouver’s chief housing officer. He recently moved from London, where runaway prices and foreign investment are writ large. “We saw that in London quite a bit,” he says. “The difficulty here is trying to get the data.” The city is doing what it can to boost housing stock: requiring that on any rezoning, 25 per cent of construction be “family housing” of at least two bedrooms. Other incentives and zoning changes have boosted rental housing construction rates and high-rise housing along transit corridors while increasing the so-called “gentle densification” of laneway housing and secondary suites.

If families can thrive in London or Manhattan, Latif says, there are parks, playgrounds, community centres and daycares enough for those in Vancouver, no matter the size of homes. “We haven’t invested millions in all those facilities to have them sitting empty.”

Rennie used his speech to push for a “speculation tax” to penalize flipping properties within 18 months of purchase, an idea later endorsed by Vancouver Mayor Gregor Robertson—and rejected by the provincial government. Rennie says his ideas of taxation and densification may be politically unpalatable, but that doesn’t make them wrong. “Unless we start fast-tracking density, we will start losing families.” Even if Vancouver developers build three-bedroom units, he doubts families would stomach the $850,000 or $1 million they’ll cost.

But what happens to a community if families flee to the burbs and schools shut? Rennie’s own former elementary school, Chief Maquinna, is at one-third capacity. How will he feel if it closes? He struggles with the question. People have to accept they can’t cling to the past and hold an iPhone, he says, a theme also explored in his speech. Interview over, he returns to the question. “If Maquinna School does close, it’s sad. But . . . ” Shrug. “I have an iPhone.” He heads for the escalator. There are deals to be done.