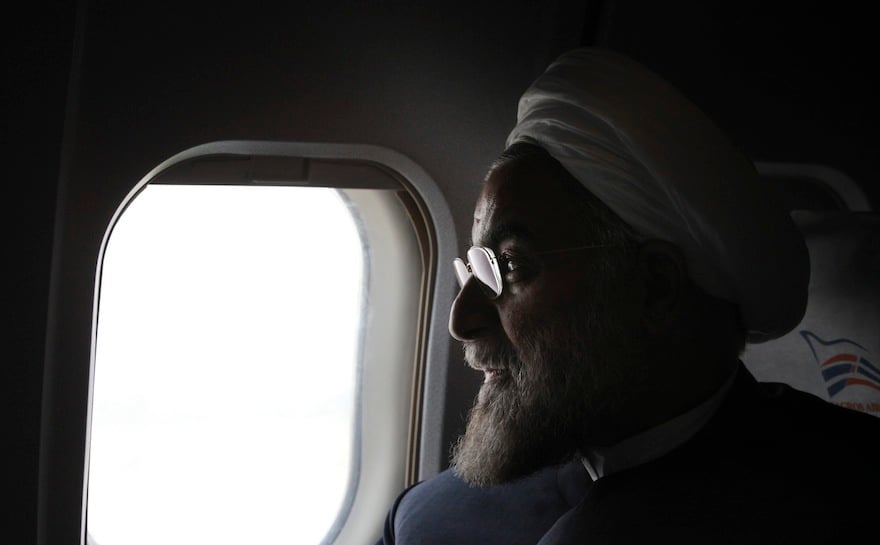 It’s the time of Nowrooz, the ancient Persian celebration of the rebirth of the world. New Year’s Day, the first day of spring, the vernal equinox: the moment the sun crosses that imaginary line in the sky above the equator, heading northward, occurred in Tehran at 1:58 p.m. on Monday.

It is the one great joy that the Khomeinist ayatollahs of the Islamic Republic of Iran have failed to eradicate from the life of the people, despite the strenuous efforts the regime exerted after seizing power in 1979. Iranian families still dress in their finest, everyone still gathers round the dining table for special holiday meals, and they still exchange gifts, and on it goes until the Sizdah Bedar holiday on the 13th day, April 2, when the people flock to parks or to the mountains for picnics.

What will follow this year is a more sinister ritual of the regime’s own invention: another sham presidential election. The Guardian Council, directly beholden to Supreme Leader Ayatollah Ali Khamenei, will begin deciding which candidates will be allowed to run for president on April 17. On April 26, Iranians will be told which candidates they are permitted to vote for, and the “election campaign” begins. Voting is scheduled for May 19.

President Hassan Rouhani—weirdly celebrated in much of the American news media as a “moderate” owing to his partnership with U.S. President Barack Obama in what turned out to be a calamitous nuclear-arms deal—is expected to be re-elected. Not that it really matters who wins. Supreme Leader Ali Khamenei still appoints most of the key cabinet posts, the courts, the bureaucracy, most of the military and controls foreign policy. Last year’s elections for the Iranian parliament and the “Assembly of Experts,” a further theocratic overlay, were undertaken according to a similar pantomime of genuine democracy.

There is said to be much intrigue and tension in the relationship between Rouhani and Khamenei, as suggested by their recent contesting bids to out-thug one another. Iran’s Intelligence Ministry, which is controlled by Rouhani, has lately stepped up its arbitrary arrest, torture, forced confession and harassment of feminists, minority groups, journalists and dual nationals. The Intelligence Organization of the Khamenei-controlled Islamic Revolutionary Guard Corps, usually in the lead in targeting those same sectors of Iranian society, has been increasingly busy locking up reformists and political activists.

Last month, the two agencies were issuing contradictory public statements about which of them was owed credit for the $1.7 billion acquired in negotiations for the January release of four Iranian-American hostages, among them the Washington Post’s Jason Rezaian. The $1.7 billion was money the U.S. ostensibly owed Iran for an arms deal struck with the pre-Khomeinist Pahlavi government. Rouhani’s Intelligence Ministry claims that it took the lead in a joint exercise with Iran’s Central Bank and President Rouhani’s office, and Khamenei’s IRGC, despite its claims, was not involved.

But it was the Central Bank’s involvement that should raise some questions in Canada, because the latest Iranian-Canadian hostage  is Abdolrasoul Dorri Esfahani, arrested last August and indicted on spying charges two weeks ago. A member of the Ontario Institute of Chartered Accountants and a former adviser to Iran’s Central Bank, Esfahani was by all accounts directly involved in the $1.7 billion cash-for-hostages deal.

The 2015 U.S.-led nuclear deal that awarded Iran billions of dollars in sanctions relief in exchange for a 10-year suspension of the regime’s nuclear-arms program has only subsidized Iran’s military expansion, its merciless war on the Syrian opposition on behalf of Syrian dictator Bashar Assad, and its generosity towards the armed-to-the-teeth Hezbollah militia in Lebanon. Last month, Iranian Defense Minister Hossein Dehghan declared that “destroying the Zionist tumor is the main duty of Muslims” and boasted that the cash-flush regime had expanded its arsenal of armaments by 45 per cent over the previous year.

It’s been seven years since Saeed Malekpour, a web programmer with permanent resident status in Canada, was arrested in Iran, tortured and forced to confess that he was guilty of a series of absurd charges, including a count of promoting pornographic web sites. Mostafa Azizi, a Toronto-based filmmaker with Canadian permanent resident status spent a year in an Iranian prison until his release last April on charges that included “insulting” Khamenei.

Canadian citizenship won’t help you, either. Before she was deported back to Canada last September, Concordia University professor Homa Hoodfar spent 112 days in the dungeons of Tehran’s Evin Prison until she was at the point of death. She could barely speak, and she could barely walk. British citizenship won’t help you either. Britain reopened its embassy in Tehran in 2015. A year later, Nazanin Zaghari-Radcliffe, a British-Iranian who works for the Thomson Reuters Foundation charity, was arrested as she was boarding a London-bound flight at Tehran’s airport on charges of plotting to overthrow the Iranian government.

Former Foreign Affairs Minister Stephane Dion was such a Pollyanna about the Iranian regime that last year he was bubbling about how he’d re-establish diplomatic relations with Tehran “tomorrow” if he could. The former Conservative government closed Iran’s spynest of an embassy in Ottawa and pulled Canadian diplomats from Iran in 2012.

It’s a good thing that capitulation to the Khomeinists’ terror state has dropped out of Canada’s foreign-policy priorities since Dion’s departure in January. The party line is still “dialogue over withdrawal,”a “cautious and incremental” approach” in “step by step fashion.” But a spokesperson for Foreign Affairs Minister Chrystia Freeland put it this way on Tuesday: “We maintain our firm commitment to the human rights of Iranians. We continue to oppose Iran’s support for terrorist organizations, its threats toward Israel, and its ballistic missile program.‎”

Here’s to a happy and blessed Nowruz, then, and a wish for the day when the ancient and glorious civilization of the Persians is no longer a hostage to the police state in Tehran.