Canada must respond to an unsafe America

International human rights lawyer David Matas on why Canada must suspend the Safe Third Country refugee agreement with the U.S. 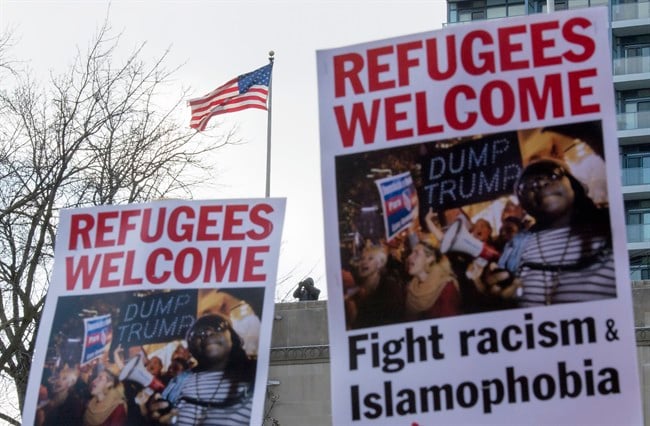 Canada should suspend its Safe Third Country agreement with the U.S. That agreement allocates refugee determination of every refugee claim to either the U.S. or Canada. Its basic principle is that a claim has to be made in the country of first arrival.

There are some exceptions to the agreement. One is that it applies only to those who appear at ports of entry, and not those who cross the border illegally and show up inland. The arrival and behaviour of Donald Trump as President of the United States has led to a flare up of these illegal crossings, even in the dead of winter, even in the coldest parts of the country.

While this exception is a safety valve, we should not be encouraging illegal crossings. It is hazardous for the refugees. It is also an arbitrary form of self-selection, favouring single young males, and disadvantaging in particular the elderly and women with young children.

The Safe Third Country Agreement no longer lives up to its name. Trump has made the U.S. unsafe for asylum seekers.

WATCH: What happens when asylum seekers cross the U.S.-Canada border

The bigotry of Donald Trump is not just the venting of one person. The publicity and respectability his group slanders has made bigotry in the U.S. viral. And its most vulnerable victims are those with the least amount of community support and connections, asylum seekers.

Refugee protection is both formal and informal. If refugees have the legal possibility of receiving protection but in fact are treated so miserably that it is impossible for them to remain where they are, then there is denial of protection in fact. That is the pit into which the Trump presidency has led the U.S.

Prior to the Trump presidency, there had already been problems with the Safe Third Country Agreement. Asylum seekers in the U.S. are frequently detained, far from major centres and legal and family support. On arrival, U.S. asylum seekers are typically required to pass a threshold test for their claims imposed by poorly trained and informed border officials. Reports are common that asylum seekers at the U.S.-Mexican border are denied access to the asylum claims system of the U.S. And so on.

The Government of Canada, for better or worse, was prepared to tolerate these prior problems. However, the invective and hostility towards refugees of the Trump presidency have pushed the agreement over the edge.  Whether the agreement made sense before, it no longer makes sense now.

The Trump presidency is cruel. Cruelty is regrettable in any context. But cruelty to the most vulnerable is particularly disheartening. Refugees, before they arrive in the US, had been, many of them, victims of the worst violations known to humanity. To greet them, as Trump has done and set an example for others to follow, with xenophobia, derision and suspicion in the place where they have sought protection is grotesque in its meanness. American cruelty needs to be countered with Canadian compassion.

Trump excuses his bigotry as a defence against Islamic terrorism. Yet, the first victims of Islamic terrorism have been Muslims, victimized because they opposed the terrorists. Trump’s campaign against terrorism consists of attacking his best allies in the anti-terrorist struggle, people within the Islamic community combatting terrorism. Canada should have the common sense to join common cause with the real allies in the struggle against terrorism and offer them the welcome the U.S. now refuses.

The U.S. is a big country. When it has a problem, it has a big problem. Canada can not on its own solve all the problems the ascendency of Donald Trump presents. But it can do this much, suspend the Safe Third Country agreement.

The agreement has an article allowing for suspension without the necessity of giving reasons, simply on notice.  Canada does not have to terminate the agreement entirely. All it has to do is just wait out the Trump presidency.

The Safe Third Country was a symbol of solidarity with U.S. refugee policy. Now that the Trump administration has attacked refugees, Canada should walk away from the symbol.

David Matas is an international human rights and refugee lawyer based in Winnipeg. He is a former president of the Canadian Council for Refugees.