Beaver populations are making a post-fur trade resurgence, causing lots of trouble and a few cases of panic 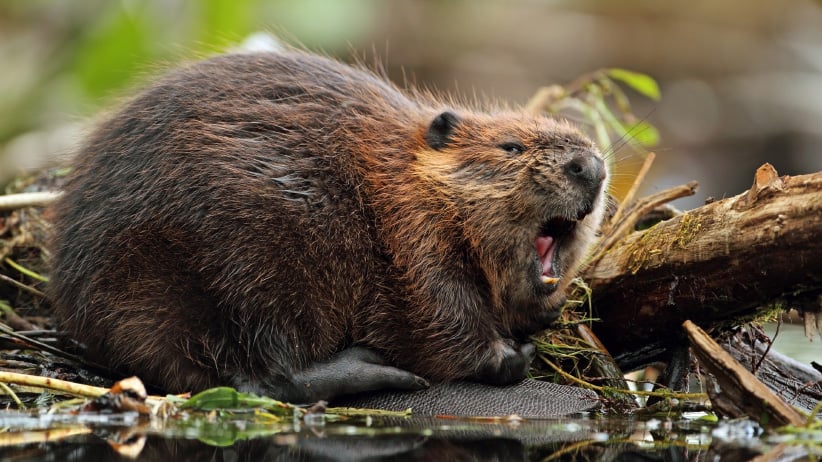 Not expecting to get chased by a beaver that he claims had aerial capabilities, Donnie Springer once set out to hunt a moose. He drove a three-wheel dirt bike in front of his father-in-law, around Devil’s Lake, Man., but soon realized his father-in-law was missing. Springer turned back, and found the man speeding away from a bucktooth terror. The beaver then turned on Springer.

The beaver first chased him using its typical method of running on its legs. However, Springer was riding at about 25km/hr, he recalls of an incident around the year 2000. For the beaver to catch up, Springer claims it deployed its tail as a spring. “It would sit on its tail, and it would go shooting itself about 10 feet in the air,” he says. “It would use its tail to propel itself … he was just a givin’ ‘er”

There is a perception in several parts of Canada that beavers are invading. In June, CTV reported that the city of Edmonton put up signs warning dog owners about dangerous beavers after several beaver attacks on pets, and the Winnipeg Free Press reported recently beavers “wreaking havoc in parts of Manitoba on a scale not seen in a lifetime.” Saskatchewan inaugurated a controversial beaver-hunting derby last spring, which reaped 589 kills, and some municipalities have introduced bounties. Farmers continue to bereave the flooding of fields; drivers, of roads, and cottagers, the loss of their favourite trees. The population is in fact surging, and the species even became a recent fascination of genome researchers. However, the growing number is only a revival of the natural population that was massacred for the fur trade, and as beavers make a comeback, Canadians may be blowing the threat out of proportion.

“Beavers cannot leap,” assures Michael Runtz, author of The Natural History of Beavers and Their Ponds and a lecturer at Carleton University. “That’s ridiculous. If you’ve ever seen a beaver, it’s not built for leaping.” He says Canadians are “over-reacting, certainly.”

Beaver behavior is, nevertheless, appalling people across the country. In a dog park in Edmonton, pet owners complained last month of Canada’s national icon biting their English Setters and Golden Retrievers. Even Runtz says his friend in Ottawa reported lying on the boardwalk this summer when a beaver bit her hand, demanding stitches. More seriously, in Ontario in 2013, a beaver dam caused a country road to flood at night and sent three cars over an 18-foot edge, where miraculously nobody was hurt. In Manitoba, Springer’s cousin, Dan Meisner, a councillor for the rural municipality of Grahamdale, has spent the Spring on patrol for hundreds of finely-crafted dams. “Every stick is perfectly lined up with the other one,” says Meisner. “You’d think a human was doing it.”

Instead, humans are undoing it. Meisner and neighbouring cattle farmers are renting excavators to demolish the dams, and the municipality of Harrison Park has hired a beaver trapper. Residents of Portage la Prairie, Man. have earned a $60 bounty for even baby beavers, called kits, or land owners can install “beaver baffles,” which trick the creatures with pipes to let water flow beneath their dams. Others prefer dynamite.

Two hundred plus years of the fur trade killed off beaver populations—40 to 60 million beavers basked in North America in the 19th century before hunters massacred them for hats and perfume. Now in revival mode, the comeback kits have grown to around 10 to 50 million beavers across the continent (including Mexico). “We got used to an image of North America that didn’t have beavers in it,” says Frances Backhouse, author of Once They Were Hats: In Search of the Mighty Beaver. “We see them as interlopers. We really have to get used to having them around. Unless we go back to the slaughter of the fur trade, we’re not going to get rid of them.”

READ MORE: 12 dishes made from beaver

That’s not to say there isn’t still some national pride left for Canada’s national animal. Scientists at SickKids Hospital learned last year that the University of Oregon crowdfunded a project to sequence the school’s beaver mascot, and “it is therefore a matter of national urgency that the beaver genome race be won by Canada,” read an internal document from the project in August 2016. Researchers at SickKids drew blood from a Quebecois beaver, Ward, and his “wife,” named June, living in the Toronto Zoo.

The genome doesn’t suggest beavers can fly. In response to Springer’s beaver tale—of the creature bouncing on its tail like Tigger—Backhouse says, “It doesn’t fit with anything I know about how beavers move. They’re awkward on land. They kind of waddle.”

The exception was the parachuting beavers of the 1940s. Trappers in Idaho transplanted nuisance beavers by trapping them, boarding them onto an airplane and placing them in wooden boxes with parachutes attached. They descended with grace. Millions of viewers gaped over the footage, but in Manitoba, the incident of the bouncing beaver in hot pursuit—getting air—was witnessed by Springer alone.