In Vancouver’s Downtown Eastside, at Ground Zero of the opioid crisis, once-controversial Insite is now just one small part of a tragic landscape 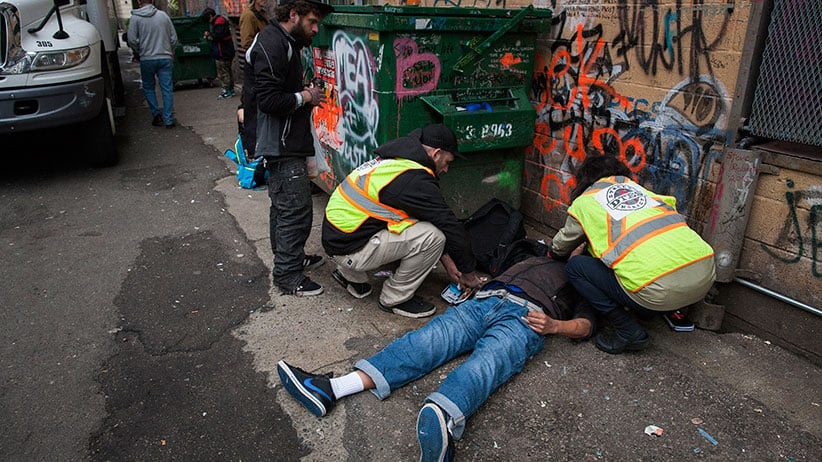 Staff members from the popup safe injection tent prepare to inject a man with naloxone as he overdoses in a Downtown Eastside alley in Vancouver, British Columbia, November 18, 2016. (Rafal Gerszak)

Some of the activity takes place on the sidewalk beside Insite, Canada’s first supervised injection site (SIS), now in its 14th year of operation. Despite its controversies and a sense that illicit drug use in and around the DTES has never been more pervasive, many still consider Insite a model for harm reduction, a kind of centre of excellence for shooting up safely. It’s something that authorities in other Canadian cities seem eager to emulate.

And yet local health officials acknowledge that Insite, and its $3 million annual operating budget, doesn’t come close to cutting it any more.

MORE: These are the provinces where the opioid crisis is most severe

A second SIS opened in the DTES this summer, and another opened in the Vancouver suburb of Surrey. Victoria plans to open its first SIS soon. In late August, Toronto unveiled its first “interim” SIS, a three-seater gallery assembled inside an existing public heath office downtown. Two permanent sites are expected to open this fall. Montreal and Ottawa are waiting to receive permission from Health Canada before opening their own facilities.

In all cases, exemptions from the federal Controlled Drug and Substances Act are required before users can bring street drugs to sanctioned, indoor facilities and inject under supervision of registered nurses and other trained staff. Only drug users may handle their drugs. Illicit substances may not be purchased or exchanged inside any sanctioned site.

Every new SIS proposal rings some alarm bells, raising concerns among residents and politicians that crime and public disorder will increase in and around the facility, that it will encourage drug use. For some, the jury is still out. It’s easy to see why even in Vancouver, where Insite seems old hat and where, in the broader DTES context, activities are relatively stable and calm.

It sits smack in the middle of an eye-popping outdoor drug market and shooting gallery. Here’s a snapshot: a urine-soaked alley, directly behind Insite. A man squats on the broken pavement, poking a needle into an open, bleeding wound in one arm. Another man stands nearby, moaning, eyes glazed, a sharp protruding from his wrist. Next to him, a woman holds a small cosmetics mirror in front of her face. She’s not applying makeup; she’s pushing a needle into her neck.

Back on Hastings, right next to Insite, a thin man in a dirty orange t-shirt and ragged blue jeans sits on the sidewalk, cross-legged, pulling small folds of heroin from a plastic bag. He’s handing the drugs to a steady stream of customers. No one bothers to disguise or conceal their transactions.

Some buyers walk straight into Insite, where they will give a name—pseudonyms aren’t discouraged—to a receptionist, and sit inside a waiting area until they are called into a large space behind a locked door. Once there, they will pick up fresh, sterile equipment, sit at one of 13 mirrored, stainless steel booths, and fix. Nurses may sit or stand next to the users as they inject. This takes an average of 20 minutes, says Tim Gauthier, one of Insite’s two clinical coordinators.

Used equipment is tossed into a stainless steel receptacle. Staff wipe down the booths. Before returning to the street, drug users can rest inside Insite’s “chill room.” Addiction treatment and primary care services are also offered to anyone interested. 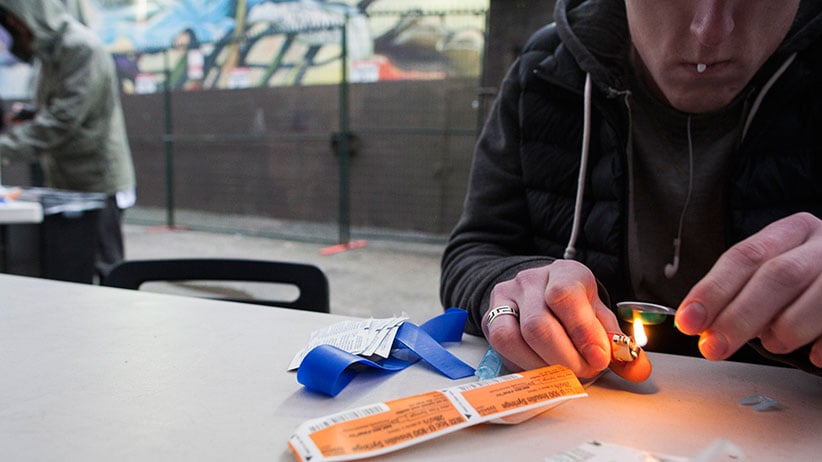 But a large percentage of DTES drug users will rarely, if ever, use the facilities and services. Five metres from Insite’s front door, a woman sits next to the curb and prepares her injection. She mixes her powdery purchase with water and heat, pulls the mixture into a syringe, and sticks the needle into a vein above her wrist.

Why shoot up on the street, when Insite is open and directly in front of her? “It’s a hassle,” she says. “I’d rather use right here. It’s not like anybody cares.”

Just up the street sits another woman, smoking what she wants to believe is heroin. She inhales, and instantly collapses, becoming unconscious; she is suffering an overdose. Without immediate help, she may die.

Staff inside Insite are alerted, and two workers rush to the woman’s aid. They strap an oxygen mask on her face and begin pumping the gas into her lungs. Sirens wail in the background; a firetruck arrives, and then an ambulance. Men emerge with life-saving equipment. Three more paramedics show up on bicycles. Nine responders, in all.

MORE: Fentanyl: The king of all opiates, and a killer drug crisis

The woman is given an injection of naloxone, an antidote for fentanyl, the potent, synthetic opiate which she has almost certainly consumed. Within five minutes, she is conscious and upright. Another five minutes pass and she’s on her feet, screaming that someone has stolen some of her welfare cash. “I got jacked,” she wails. While one of their colleagues tries to soothe the woman, two paramedics grin and laugh. They’ve seen it all. “Let’s get out of here,” one says.

The responders return to their vehicles or ride away on their bikes. More sirens scream. Another ambulance races to the scene of an emergency down the street. It never stops.

By most accounts, the amount of illicit drug use, drug dealing and related problems in the DTES has never been higher. Local health officials concede that Insite doesn’t—or simply can’t—provide enough service to satisfy local harm reduction needs. But they insist its positive impacts are undeniable and not open to debate.

“The neighbourhood will look worse than what you remember from 14 years ago [when Insite opened],” acknowledges Patricia Daly, chief medical health officer for Vancouver Coastal Health, the public authority that oversees and funds Insite. “But people forget. The Downtown Eastside existed long before Insite was established. Now, it didn’t solve the problems in the neighbourhood. But it didn’t make things worse. It didn’t encourage drug use. Injection drug use has been declining since Insite opened. [In the late 1990s], the HIV infection rate was the highest in the world among DTES injection drug users. It has declined. Overdose deaths declined. Life expectancy has improved by ten years.”

Studies conducted after Insite was granted its first Health Canada exemption in 2003 back up Daly’s comments. And while Insite doesn’t stop all of the 500 people it serves every day from overdosing on illicit street drugs—there have been 6,440 overdose “interventions” on the premises since the 2003 opening, and 1,781 last year alone—it continues to prevent death: no one has ever died from an overdose at Insite.

Multiple studies also show the spread of infectious diseases such as HIV and hepatitis C has been dramatically reduced since Insite opened its doors in the DTES. 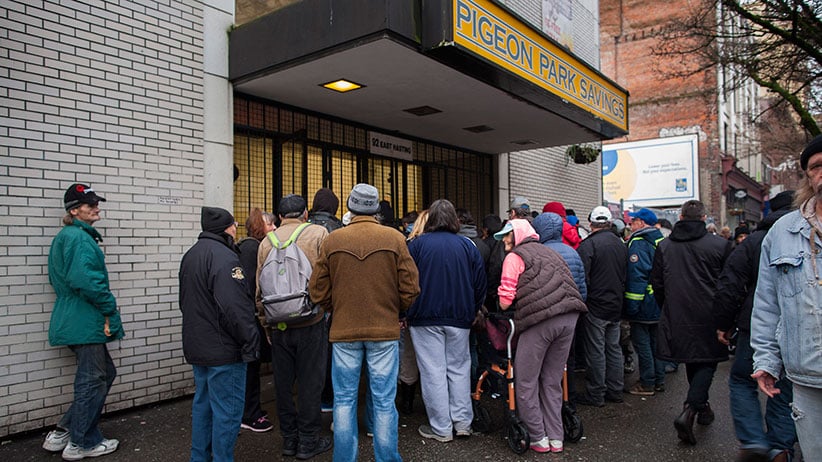 Daly and other health officials can reel off statistics and refer to myriad reports at their fingertips, all of them measures of proof that Insite works. Perhaps the most convincing case was made, somewhat ironically, by an “expert advisory committee” commissioned by Stephen Harper’s Conservative government, an administration that was not in favour of the facility at all.

In 2008, the Conservatives refused to extend Insite’s Health Canada temporary exemption. The same year, the government’s expert committee released a number of findings: no evidence of increased drug trafficking, loitering or petty crime in the vicinity of Insite; no increase in the amount of open drug use in the area around the facility. What’s more, the committee determined that Insite was cost-effective. Providing drug users with sterile equipment and clean facilities and treating overdoses in the premises had actually saved taxpayers’ dollars, while reducing workloads for paramedics and hospital emergency room staff.

Regardless, the Harper government refused to move from its anti-SIS stance, prompting Insite to launch a court challenge. It wanted Health Canada to allow it another temporary exemption. The case landed before the Supreme Court of Canada, which found in Insite’s favour in 2011.

A key factor behind the court’s decision was the determination that drug addiction is an illness, for which Canadians have a right to treatment. Moreover, the court concluded that risks posed by injection drug use are reduced when done in the presence of health professionals.

Insite carried on, winning over skeptics and concerned neighbours, even through an ugly spending scandal three years ago that involved the non-profit society operating the facility. Now under new management, the Portland Hotel Society still manages Insite. And Insite staff continue to save lives.

What has changed—and what makes the DTES “look worse” than it did when Insite first opened—is the appearance of fentanyl, which began entering the illicit drug supply in or around 2015. It is blamed for the dramatic increase in public disorder, drug overdoses and overdose deaths.

In Vancouver alone, the number of overdose deaths attributed to illicit drug use climbed from 100 in 2014 to 231 last year. The number this year is expected to reach 400, according to the B.C. Coroners Service.

“We managed to meet the last crisis [in the late 1990s and early 2000s],” says Daly. “But this one is different. It’s the contamination of the entire drug supply. And the past one and half years into this new crisis shows us that supervised injection sites are not sufficient to manage it.” 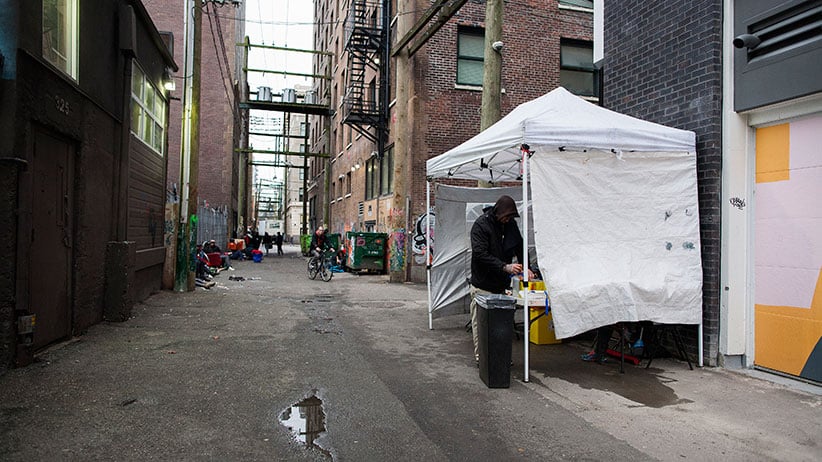 This explains the sudden appearance of six so-called overdose prevention sites, which are basically stripped down versions of Insite, thrown up inside DTES alleyways and side-streets and in some Vancouver suburbs. Operating without any sort of federal government exemption—they have provincial but not Health Canada approval—the new, makeshift facilities do not provide treatment options; they are triage centres, pure and simple, where people can inject their drugs and then leave, and where overdoses are treated on the spot by trained staff.

This is where things now stand, today’s grim reality: Canada is experiencing the deadliest drug-induced crisis it has ever seen. Where Insite no longer seems cutting edge or even adequate, and supervised injection facilities in other cities are only now coming on-line or being contemplated, and are already anachronisms.

Deeper, more considered strategies are urgently required, Daly and her colleagues insist. These include the legalization of “hard” drugs such as heroin, so that addicts can obtain an unadulterated, regulated supply that won’t immediately kill them. As it now stands, street heroin is likely to contain trace amounts of fentanyl, which is about 100 times stronger. Users may try to adjust by injecting smaller quantities of their purchase, but that’s a risky guessing game. Legalizing and regulating heroin use makes perfect sense to some, but it’s more radical than state-sponsored supervised injection and, politically, it seems unlikely to fly.

Public health officials also talk about longer-term measures, such as better addiction treatment systems with effective follow-up procedures, prevention of mental illness, and greater attention to addiction risk-factors such as childhood trauma, poverty and homelessness. Those are long-term, expensive approaches Canada has elected, for the most part, to ignore.

The result? People continue to shove whatever poison they will find into their bodies, with band aid responses. And daily horror, in the Downtown Eastside and beyond.