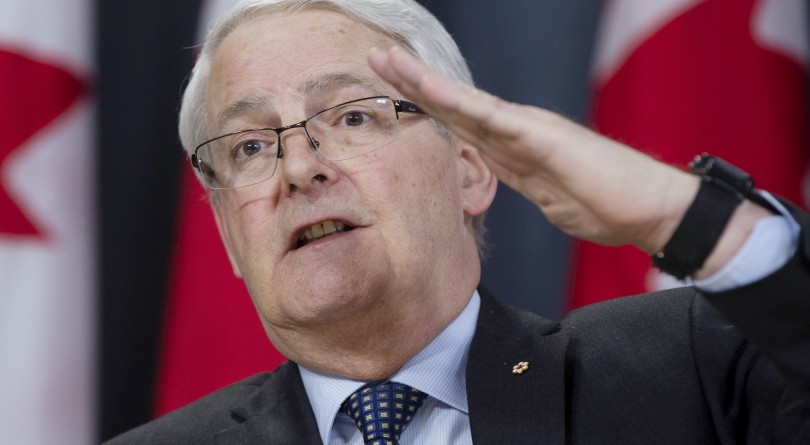 Transport Minister Marc Garneau sat before the requisite Canadian flag backdrop in the National Press Theatre in downtown Ottawa on Wednesday morning, explaining the new information that led Canada to belatedly join a long list of countries grounding the Boeing 737 Max 8, after the second crash in five months involving that aircraft left 157 people dead on Sunday.

Overnight, Canadian air safety officials had received new satellite data that suggested a disconcerting similarity between the flight paths of the Ethiopian Airlines plane that crashed soon after takeoff in Addis Ababa on the weekend and a Lion Air flight that crashed after leaving Jakarta in October, killing all 189 people on board. Garneau laid it out in clinical detail.

As a flight leaves the runway and climbs, “angle-of-attack sensors” measure how steeply the plane is ascending; if the angle is too abrupt, the plane’s lift can stall.* Authorities now know, based on the investigation into the Indonesian crash, that the sensors were faulty on the Lion Air plane, Garneau said, so the plane sensed that its nose was too high and its Maneuvering Characteristics Augmentation System (MCAS)—the auto-pilot software—forced the nose of the plane down in an attempt to correct.

“The pilot said, ‘It’s not too high,’ so he countered that,” Garneau explained Wednesday. “And then a number of seconds later, the MCAS software kicked in again and tried to force it down again, and (the pilot) said, ‘No, no, we’ve gotta climb.'”

RELATED: This is where Canada’s 737 MAX 8 jets flew the day an Ethiopian plane went down

As he explained the oscillations of these two planes while their pilots battled a software glitch intent on hurtling them and their passengers back toward the earth, Garneau illustrated it using one hand held out in front of him, palm down, undulating in a wave form. The visceral horror of what he was explaining, and what it must have felt like for those on board and in the cockpit, was somehow underlined by the gesture of a child sailing a hand out a car window on a road trip.

“And eventually, unfortunately, the pilot lost that fight with the software,” Garneau finished.

He is a former Navy combat systems engineer and astronaut, so it’s unlikely there is a government minister anywhere in the world more well-suited to walking through this particular file. At one point while answering a question, Garneau said he was removing his politician’s guise to don his “engineer’s hat” and his astronaut hat, too, in explaining some technical details.

But while the tone of his press conference was resolutely keep-calm-for-we-are-carrying-on, the facts he laid out were unavoidably the stuff of deep human phobia.

The decision to ground all Max 8 and 9 aircraft departing from, arriving in or flying over Canada came well after a host of other countries, including the entire European Union, made similar decisions. Just a few hours after Garneau’s order took effect—he announced it while there were half a dozen of the planes in Canadian airspace, all of which were allowed to land on their normal schedule—the Federal Aviation Administration in the U.S. finally followed suit. Boeing is an American company that has been loudly championed by President Donald Trump, and the FAA is the certifying agency that declared the Max 8 fit to fly; it said it finally decided to ground the planes “as a result of the data gathering process and new evidence collected at the site and analyzed today.”

RELATED: MH17: Could anything have saved that plane?

Garneau, for his part, repeatedly referenced “new data” his department received overnight and analyzed rapidly on Wednesday morning. He described it at various points as being of the type air traffic controllers use when working with Nav Canada, or as being procured from “an organization,” but he did not explain the source. Subsequent questions to his office received no reply, and Transport Canada said it could not provide an answer on Wednesday.

The transport minister emphasized that the picture painted by the satellite data about the similarities between the Indonesian and Ethiopian flights was not conclusive, but it was worrying enough that it “crossed a threshold” that spurred the government to act. There have been no reports of Canadian pilots complaining of similar issues with these aircraft, he said.

Following the Lion Air crash in the fall, Boeing and the FAA put additional procedures and training in place to help pilots cope with problems that may come up. But Francois Collins, associate director of general civil aviation—one of two department officials flanking Garneau at the press conference—said Canada went even further in implementing additional training for its pilots so they would be able to cut off several automated systems in case of malfunction without needing to consult any manual or checklist.

RELATED: Marc Garneau says passengers’ bill of rights to be in place by 2018

“This is not uncommon. We see that when we have engine failures or decompression, the pilots are trained to commit to memory certain action items,” he said. “That’s what we wanted our Canadian pilots to do, is commit to memory those items so they can actually concentrate on trying to fly the airplane and do what needs to be done.”

But while Garneau took pains to urge calm and reassurance for a potentially jittery Canadian public, the effect of the press conference was like standing in front of an open elevator shaft watching someone tinker with repairs, and then trying to forget it all when the doors open for you to climb aboard.

“There are lots of reasons why aircraft can run into difficulties. So I really do urge you—and the public—not to jump to any conclusions,” Garneau told the assembled media. “Yes, it was a clear day. Yes, an experienced pilot. Yes, it happened within 10 minutes (of takeoff). But we don’t know why the Ethiopian aircraft behaved the way it did. We don’t even know precisely what happened, and that’s what we want to get to the bottom of.”

CORRECTION, March 14, 2019: The original version of this story stated that if an aircraft’s angle of attack is too abrupt, the engines can stall; in fact, an overly steep angle of ascent can cause the aerodynamic lift of the wings to stall.