Mitchel Raphael on which MP had the winning Colonel Sanders moustache 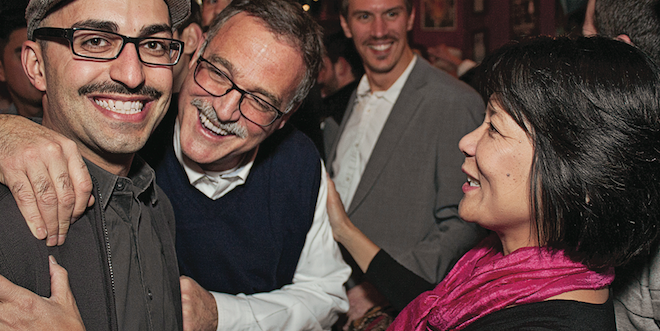 The NDP held a facial-hair contest at their watering hole Brixton’s to mark the end of Movember, the month-long campaign that uses moustaches to promote awareness of prostate cancer. NDP Leader Thomas Mulcair and MP Olivia Chow were the judges. The first category was the Jack Layton moustache. With so many young people in the NDP, Chow quipped that many were “early Layton moustaches.” In the end, the winner was Nova Scotia MP Robert Chisholm for his older version of the Layton ’stache. Most intimidating moustache, named after Calgary Flames Lanny McDonald, was a draw between MPs Fin Donnelly and Jean Rousseau. NDP staffer François Soucy took home the honour of raising the most money for prostate cancer and was given a DVD set of Magnum, P.I., starring moustache icon Tom Selleck. The “Mo’ sister” award went to MP Alexandrine Latendresse. Mulcair decided to create a new category on the spot, “The best Colonel Sanders,” which went to MP Malcolm Allen’s white whiskers. Mulcair didn’t opt for a moustache for Movember. He has had his beard since he was 18. He only shaved it all off once when he and his wife, Catherine Mulcair, went in costume for a performance of Grease—no one recognized him without a beard and wearing a leather biker jacket. Another time he shaved off everything but a moustache and again people did not recognize him. His wife said he needs to just keep the beard.

Joan Crockatt, the Conservative candidate who won the recent Calgary Centre by-election, was on the Hill last week for some orientation. She says that, as a former journalist, she is aware of some of the pitfalls of being a new politician, including the endless receptions where one can pack on the pounds. Toward the end of the campaign, she said, “I couldn’t understand why I wasn’t losing weight door-knocking.” Then she realized the problem. During the by-election, she developed an addiction to McDonald’s smoothies—pomegranate, in particular.

My Babysitter’s a Vampire won this year’s Shaw Rocket Prize of $50,000. The award recognizes the best in Canadian kids’ programming. On hand announcing the winner at the Fairmont Château Laurier was Minister of Human Resources and Skills Development Diane Finley. The minister said children’s programs are one of her guilty pleasures. “I’m kind of addicted to Artzooka,” said Finley of the program where, according to the show’s website, host Jeremie Saunders “shows you how to create masterpieces out of recycled materials and how to tackle original projects using tech gadgets.”

Garneau shoots for the stars

Canada’s first astronaut in space, Marc Garneau, is the latest to join the Liberal leadership race. His campaign has already been peppered with space references and his website declares: “Let’s take Canada to new heights.” Liberal insiders like the references and say Garneau should use what he’s got. The approach is in contrast to that of former Liberal MP and hockey legend Ken Dryden, who opted not to use hockey references in his 2006 Liberal leadership race because he wanted to be taken more seriously. Dryden won six Stanley Cups over his hockey career. In other Liberal leadership news, front-runner Justin Trudeau may have an unfair advantage in the opposition lobby. The brand of mineral water served there is Saint Justin, which is sourced from the Quebec’s lower Laurentian Mountains.