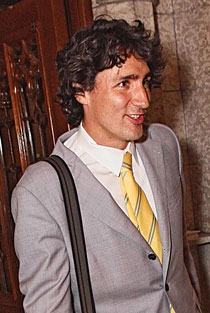 Since the beginning of this session of Parliament, Liberal leadership hopeful Justin Trudeau’s seatmate in the House has been Kirsty Duncan. Duncan has a Ph.D. in geography, is considered one of the world’s leading experts on pandemics and served on the Intergovernmental Panel on Climate Change, a group that won the 2007 Nobel Prize with former U.S. vice-president Al Gore. What did Duncan and Trudeau do between votes or when they had extra time in the House? Trudeau would bring drafting paper. Says Duncan: “He taught me how to do these 3D engineering puzzles. I had never done them before.” She says Trudeau is always interested in the latest technology and often suggests books on science to her. “He’s a voracious reader,” says Duncan. Once she brought him to a Hindu mandir where they also had a museum: “He was able to go from exhibit to exhibit, whether it was about the history of pi or deities, he could comment on everything.”

Status of Women Minister Rona Ambrose was recently at the United Nations to help celebrate the first International Day of the Girl. Plan International and Plan Canada, two development charities, had been fighting to have the day recognized for years, but it was only after much arm-twisting by Ambrose, who got involved with the campaign a year ago, that the UN adopted Oct. 11 as the special day. Ambrose says Turkey was a key ally bringing Muslim countries on board. Peru helped negotiate with South American countries. Many international landmarks, including the Egyptian pyramids and the CN Tower, were lit up in pink that day. Ambrose was presented with an award at the UN, which she dedicated to Malala Yousafzai, the 14-year-old girl recently shot by the Taliban because of her fight for girls’ education rights.

The most moving moment for Ambrose was reconnecting with a young girl from rural Cameroon named Fabiola. When Ambrose met her a year ago, Fabiola had been fighting against forced marriages in her village. The girl’s plight, along with those of other girls grappling with harsh issues like honour crimes, sex-selective abortion and child trafficking, inspired the minister to get involved. Says the Minister: “They are just teenagers and these are the issues that happen in their communities.”

Tory Sen. Linda Frum recently helped host a talk by Irshad Manji about her experiences in Indonesia for her new book Allah, Liberty and Love: The Courage to Reconcile Faith and Freedom. Manji, a well-known advocate for progressive and moderate Islam, spoke to the Canada-Indonesia Parliamentary Friendship Group. She discussed troubling changes she’s seen take place in Indonesia. In May, she was attacked by extremists there during a book event; a human shield of Muslim women hid and protected her. What Manji didn’t discuss was Frum’s assistance after that attack. Frum had received a strange message from Manji’s email account asking the senator to answer questions about Manji and send them to the Canadian embassy in Jakarta. Feeling suspicious, Frum called Manji, who told her about the attack and that she’d lost her passport. Frum arranged to get her a new passport immediately.

The two women have known each other for eight years, having met at an event Frum hosted with her brother David for the author Christopher Hitchens. Frum’s daughter also interviewed Manji last year at the Bishop Strachan School boarding school for girls in Toronto. When asked if her daughter was going to continue in the Frum tradition of journalism, the senator said there is no set path yet. Her daughter is currently studying ethics at the University of Toronto.