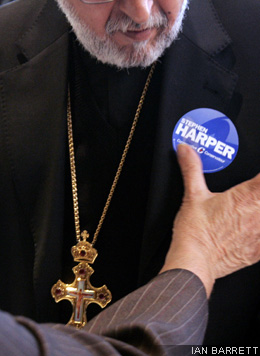 As Canada’s once-mighty Liberals consider their future, they might be advised to visit a local church—and not just to pray for the party. The religious vote, it seems, played a major role in their recent election defeat. According to new data from Angus Reid Strategies provided exclusively to Maclean’s, Catholics—who make up 44 per cent of Canada’s population and have preferred the Liberals for decades—are flocking to the Conservatives.

Catholic voters back parties that are community-minded, says Andrew Grenville, Angus Reid’s chief research officer. And in 2006, for the first time, they shifted their support to the Tories. This year’s results confirm the trend: outside Quebec, 49 per cent of Catholics who attend church weekly voted Conservative, compared to just 38 per cent in 2004. Within Quebec, where upwards of 80 per cent of the population identifies as Catholic, the switch away from the Liberals is even more striking. In 2008, just 22 per cent of Quebec Catholics voted Liberal, compared to 56 per cent in 2004. “Looks like we have a new status quo,” Grenville says.

It’s not just Catholics who’ve had a change of heart. Protestants, who make up 30 per cent of the population, tend to split their vote between the two major parties, but over the last four years, there’s been a big shift toward the Tories. In 2008, 64 per cent of church-going Protestants outside of Quebec chose the Conservatives, compared to 51 per cent in 2004. Voters who attend so-called conservative churches (such as Baptist, Mennonite, and Stephen Harper’s own Christian and Missionary Alliance) prefer the Tories in even greater numbers: a whopping three-quarters of them voted Conservative this year.

What does it mean? “The Liberals have alienated their base, which shows how weak their support really is,” Grenville says, adding that he isn’t very optimistic about the party’s immediate future. “I can’t see Bob Rae or Michael Ignatieff appealing to that vote either, which is in part why their prospects aren’t too bright.”