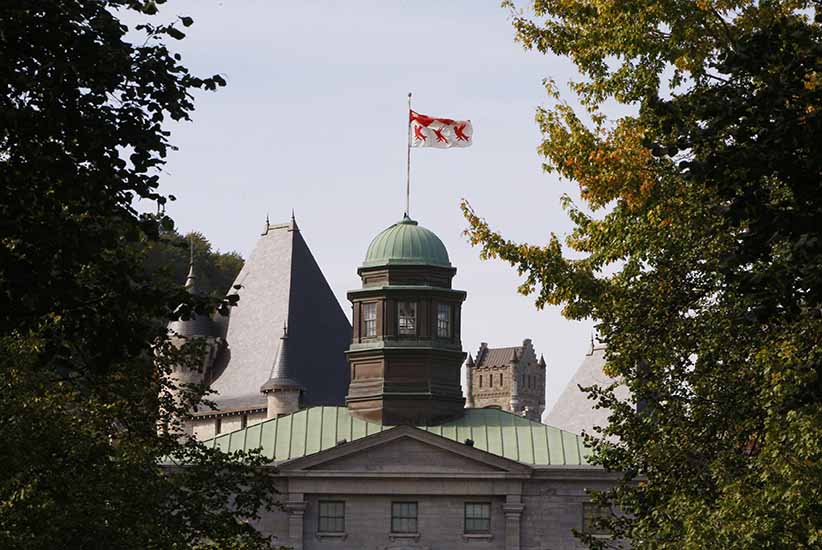 The McGill University campus is seen in Montreal (Shaun Best/Reuters)

In the wake of a controversy over a Maclean’s opinion piece from Andrew Potter—who would go on to resign his position as McGill’s Institute for the Study of Canada—the Canadian Association for University Teachers (CAUT) has sent a letter to Suzanne Fortier, McGill University’s Principal. The letter, from CAUT executive director David Robinson, raises questions over Fortier’s statement that Potter was not forced to resign, and asks a series of questions, requesting answers and recommending a CAUT investigation as an academic-freedom case.

The full text of the letter follows.

The Canadian Association of University Teachers is deeply troubled by the circumstances surrounding Professor Andrew Potter’s resignation as Director of the McGill Institute for the Study of Canada following an article he wrote for Maclean’s Magazine on March 20, 2017. While I am aware of the public statements made by you and the University, your response to date has not alleviated our concerns about whether his academic freedom was violated. On the contrary, those statements have raised more questions.

You have asserted that Professor Potter was not forced to resign, and yet you have stated that his resignation was necessary. This leaves open the question of whether there was pressure exerted by you or others in the McGill administration for him to volunteer his resignation. You have also stated that academic freedom is not a consideration in the matter as Professor Potter held an administrative position with the University. You should know that this blatantly contradicts the well-established principle that administrators, like Professor Potter, who also serve as members of the academic staff of their institutions enjoy the full protection of academic freedom.

There remain many other questions in this matter:

1) If McGill’s policy on academic freedom states that “[t]he university and its officers have a duty to protect the academic freedom of its scholarly community, both individually and collectively, from infringement and undue external influence,” then why did McGill issue the tweet on the afternoon of March 21st disassociating itself from Professor Potter’s article without also stating that he was exercising his academic freedom in writing the column?

2) Did the Principal, Principal’s office, or any other senior McGill administrator expressly defend Professor Potter’s exercise of academic freedom in writing the column in any response to concerns raised by an internal or external party?

3) Did the Prime Minister’s Office, the Premier or anyone from the Premier’s office, any Minister or member of a Minister’s office, or any official on behalf of the City of Montreal contact or communicate in any manner with the Principal’s office, the Board or any other administrative office at McGill about Professor Potter’s article? If so, what was the nature and content of such contact and/or communication?

4) Did any other external party, including individual donors, donor corporations and/or sponsors or financial supporters of McGill contact or communicate with the Principal, Principal’s office or any other senior administrator at McGill, raising concerns over the Potter column?

5) Did the Principal, Principal’s office, the Institute for the Study of Canada, the McGill Communications and External Relations Office, or any other office or administrator at McGill contact or communicate with Professor Potter with respect to the column and its content during the following time periods:

b)  at any time between the release of the tweet on March 21, 2017 and the posting of Professor Potter’s resignation as Director of the Institute on March 22, 2017?

6)  In considering his resignation, did the Institute, the Principal, Board, or any other administrative body at McGill that may be part of the decision to accept the resignation, expressly advise Professor Potter that McGill would publicly support his exercise of academic freedom in writing the column if he chose to withdraw his resignation?

7)  Did McGill University, through the Principal, Principal’s office, or any other administrator and administrator’s office ever advise Professor Potter that the University was or would be considering discipline, including termination of employment, for any reasons with respect to the column or column contents?

Academic freedom is central to a university’s mission in a democratic society. It includes the right of academics to raise deeply disturbing questions and provocative challenges to received wisdom without censorship or reprisal. If the University did indeed cave in to external pressure and Professor Potter was pressured or coerced into resigning, this would represent one of the most significant academic freedom cases in recent decades. It is in everyone’s interest that all details surrounding Professor Potter’s resignation are revealed.

I have discussed this case with the Chair of our Academic Freedom and Tenure Committee. Subject to any further information you may provide, we will be recommending the establishment of a CAUT investigation pursuant to our procedures in academic freedom cases.

I look forward to your reply. Sincerely,