CFB Trenton rolls out the khaki carpet for refugees

At Canadian Forces Base Trenton, soldiers and workers busily prepare for their guests: 950 Syrian refugees 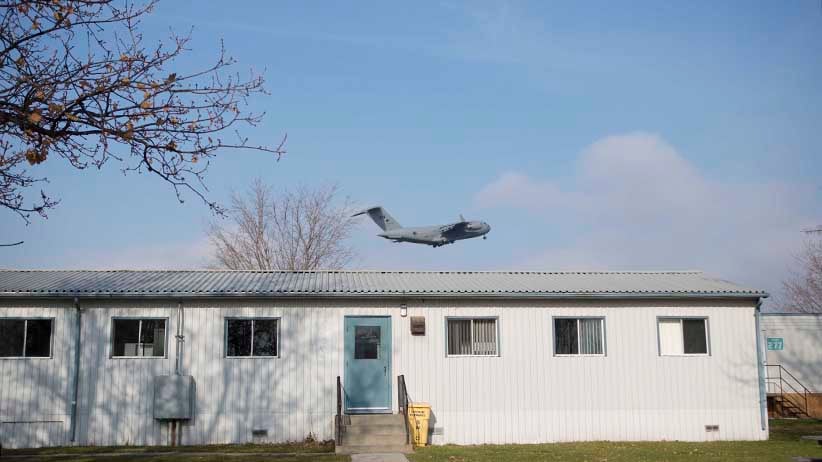 A CC-177 Globemaster III flies over the barracks that will potentially be used for refugees at the Trenton Cadet Training Centre on CFB Trenton. (Photograph by Della Rollins)

In Barrack 50-D Chipmunk, a company of soldiers does housekeeping with gusto. As they wheel a trolley of bedding between bunks, one says she’d like to place Hershey Kisses on the pillows, though the camp commander has opposed. Others clean urinals, fill soap dispensers, stack rolls of paper towel and drape shower curtains. The site is the Canadian Forces Base Trenton in Ontario: population soon to spike to near 1,000.

“Yep, it’s terminated properly,” says one soldier as he installs a phone, “just pull those sharp wires over so nobody catches their skin.” On the frosted grass outside, his comrade has spray-painted the phones red. The colour will translate to “emergency use” for the 950 Syrian refugees expected to stay at the base, likely for four to six weeks before settling in 36 cities across Canada.

To help winterize the camp, civilian contractors arrive in trucks. Wearing denim instead of khaki and with pencils tucked behind their ears, they stand out like Muggles at Hogwarts, but they work with no less spirit than the military’s own. Using ironing boards as workbenches and conducting a symphony of power tools, they install insulation and wooden planks as skirts around the barracks. “Don’t cut your fingers, eh,” one tells another, who power-saws the wood casually as if slicing a bagel for lunch. Hippo-sized heaters and a mothership of a mobile kitchen arrive to inhabit the lawns and warm and feed the future guests. Men in suspenders build banisters on the bathroom steps, setting them low for children.

In the air of excitement, there is also a wind of pride. CFB Trenton is Canada’s largest Air Force base, operating nine air squadrons year-round and seven cadet courses each summer. Beginning Dec. 1, the base plans to be part of the Liberal government’s commitment to accept 10,000 Syrian refugees before the end of the year, followed by another 15,000 in 2016. On base, the Canadian flag often flies in sets of two for the sake of symmetry, while soldiers salute each other with locked knees and move with no arch in their march. A poster barks, “shoes to be placed behind the barracks box in order of sandals, shoes, and boots. Nothing more!” The discipline is in the details, as mistakes get quickly noticed; in the Air Force, soldiers commonly have 20/20 vision.

Along with adding winter fixtures, the soldiers also clear out summertime and military-specific effects. Most notably, there are too many ironing boards. After a briefing on how to handle them all, soldiers swing the boards into a pickup truck, arrange them in rows and drive them to storage in a meringue-shaped dome, leaving no unwanted ironing board behind. They also take down the posters outlining the cadet laundry schedule and cadet standards, which include, “all cadets must be up and out of bed at 0620h.” At the facility dedicated to wellness and morale, soldiers clear out other posters—these ones advertising slushies for sale—along with cabinets full of games. The upright fan won’t be necessary, and the popcorn machine has to go. 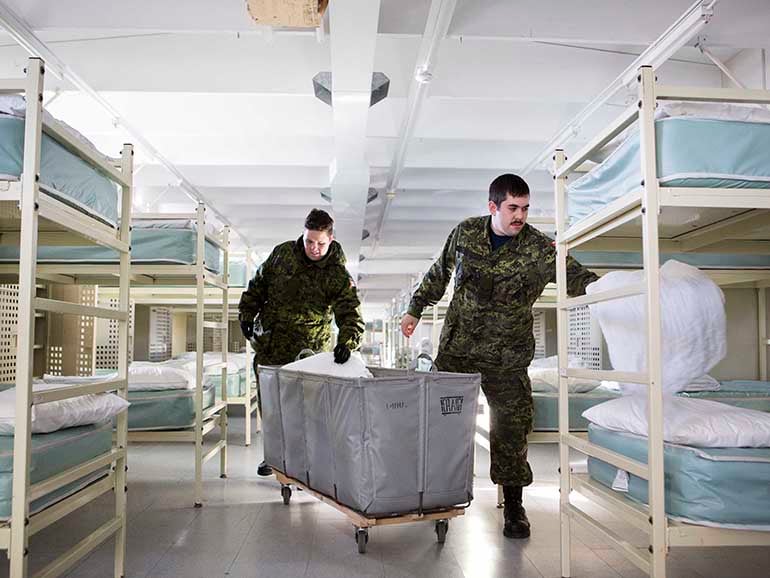 Aviators Mike Dudas (left) and Christopher Thomson put linens on the beds inside the barracks that will potentially be used by refugees at the Trenton Cadet Training Centre on CFB Trenton. (Photograph by Della Rollins)

The town of Trenton, Ont., 170 km east of Toronto, is small enough for businesses like “Trenton Pharmacy” and “Trenton Clothing Repair” to monopolize their services. The sign on a local church reads, “life is short. Pray hard,” while an automobile shop announces, “snowmobile season is here … are you ready?” With the town literally centred around the military base, everyone has an opinion on the refugee plan. “People are being moody about it,” says 21-year-old Rob Bradshaw, who works at a gas station.

“Personally, I’m thinking the refugees are going to be a little standoff-ish,” says Sharlene Anderson, who runs a hairdressing school in town. “If your country is that bad, don’t bring it here,” she says. One of her students, James Cox, notes that Canadians themselves can act horrifically, recalling that Col. Russell Williams, who commanded CFB Trenton from 2009 to 2010, is a convicted rapist and murderer. “Trenton is a small, white town,” says Cox. “There are different views, but not one who doesn’t want to help human beings.” Cox says he’d happily give haircuts to refugees: “Everyone’s always going to need a haircut.”

The refugees might not explore town at all, as the base hasn’t released details on daily activities and will provide for their immediate food and clothing needs. (Once they arrive in their settlement cities, The Salvation Army plans to give them vouchers to choose more clothing from second-hand stores). But the families may at least visit the playground just outside the base’s barbed-wire fence. The jungle gym, padded with woodchips and specifically labelled “Age 1.5–12,” is part of the base’s daycare. The newcomers might also find moments of fun around the barracks. In one, a loose volleyball bops beneath the beds. In another, 79-B Mosquito, someone has drawn a minuscule happy face on bunk number 595. Like the red paint on the emergency phones, the smile will translate just fine.