Photographer Guillaume Haché talks about a set of photos he happened to take of Cpl. Nathan Cirillo—just days before the soldier's death 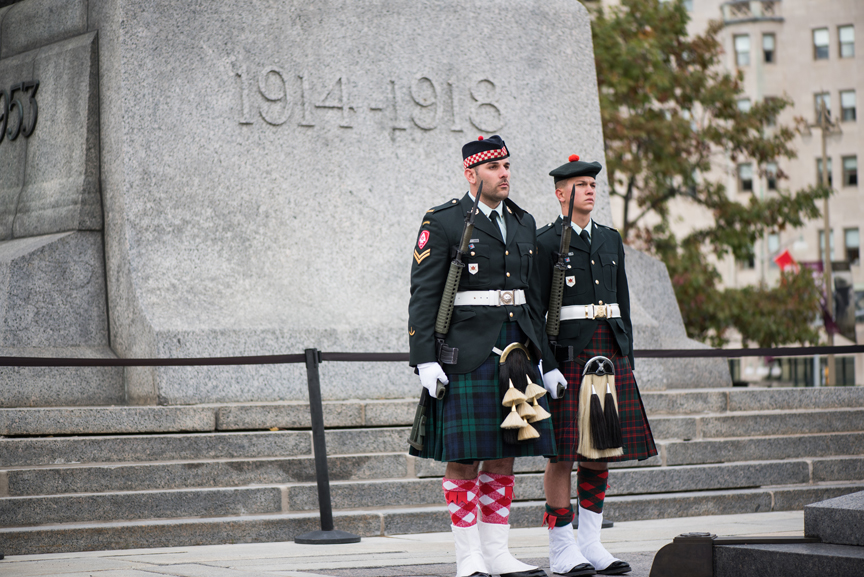 Cpl. Nathan Cirillo and other soldiers stand guard at the Tomb of the Unknown Soldier in Ottawa. Photograph by Guillaume Haché

Oct. 19 wasn’t a particularly different kind of day for Guillaume Haché. The 30-year-old professional photographer based out of Gatineau, Que., was preparing to shoot a weekend wedding at the University of Ottawa by spending that Sunday afternoon snapping practice photos in the surrounding area, including at the National War Memorial. When he was there, he noticed the changing of the guard. He had never seen that before, so he took a series of photos over the course of three quick minutes, then went on with his day. “I don’t even think we [he and the guards] made eye contact,” said Haché.

Three days later, the War Memorial would be the site of tragedy, when one of the guards, Cpl. Nathan Cirillo, was struck down in the line of duty. Haché was watching the reports on TV and recognized the guard trying to save a fallen man’s life as one of the two guards he photographed on Sunday. “So I was waiting for the name to come out and, when they got it, I went to my computer and zoomed in on the name tag.” It was, indeed, the man reported to have died: Cpl. Cirillo.

“I don’t know how to feel about it,” said Haché. “I don’t get emotional, but I just—I didn’t want to sell the pictures or even show them to anybody, because I didn’t know what people do in those situations. I have a strange feeling about those photos. It got a lot of attention, but I don’t want to take advantage of that.” He decided to post two on Facebook with a nice note, to share with just his friends, but, before long, the Internet took them viral.

Here, Haché shares with Maclean’s readers the rest of the set of photos where he happened to capture Cpl. Cirillo’s changing of the guard—now imbued with sad new meaning.