Weeks after the return of one of his last stolen items, one of Canada's most infamous antique thieves is out on parole 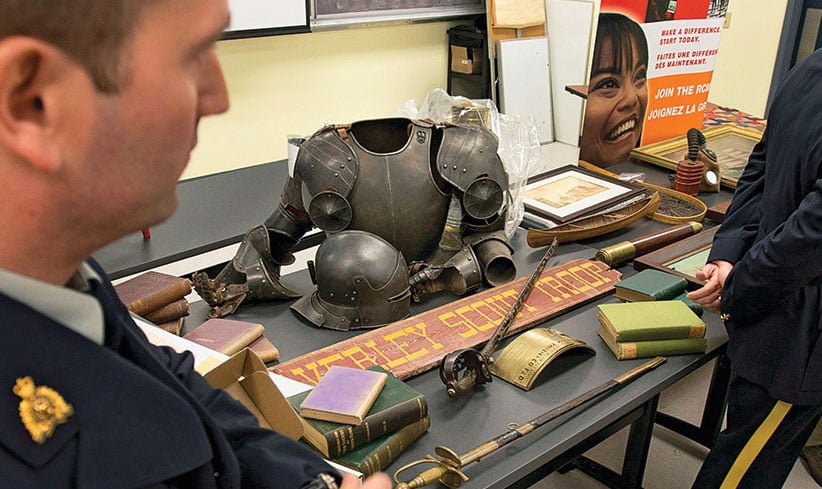 The RCMP display some of the hundreds of historical artifacts discovered at a suburban home, at a news conference in Halifax on Friday, Jan. 25, 2013. John Mark Tillmann has been charged with possessing stolen property. THE CANADIAN PRESS/Andrew Vaughan

Before Const. Darryl Morgan of the RCMP could close the books on one of the largest antique thief cases in Canadian history, he had to travel to U.S. Homeland Security in New York City to retrieve a first-edition copy of Charles Darwin’s On the Origin of Species. It was once locked under a glass cabinet at the Mount Saint Vincent University library in Halifax, but went missing one day in 2009, traded hands multiple times, and was subsequently sold at a Sotheby’s auction for $31,000.

Morgan’s trip was nearly three years in the making, and marked the final chapter in the unusual story of one of Canada’s most infamous antique thieves: John Mark Tillmann—“a kleptomaniac with taste,” as Morgan describes him.

Police caught up to Tillmann in January 2013 and arrested him for possession of stolen property. His Fall River, N.S., home was full of rare paintings, furniture and even a full suit of armour on display, most of which were stolen from antique shops, university libraries and small-town museums across Atlantic Canada.

Related reading: ‘Old scores: How the country’s most daring antique thief amassed a fortune by thinking small and slow’

Tillmann pleaded guilty to 40 charges, including theft and fraud, in September 2013, at which point RCMP had approximately 10,000 items to return to rightful owners—if they could find them all. At first, they refused to publish a list of all the stolen items, for fear that there might be some dubious claims to ownership. Instead, Morgan spent six full days in prison with Tillmann, flipping through pictures of all the items as if it were a catalogue, asking Tillmann where he got them. “Strangely enough, he remembered where quite a few of these things came from,” Morgan says.

For the hundreds of items that were never claimed, or for which the original owner was never found, the RCMP invited local museums from all over Atlantic Canada to send staff to a yard sale of sorts, where they could claim items if they fit with a current collection. There was no auction; every item was available for free.

It was an intriguing way to deal with the remainder of Tillmann’s stolen goods. For instance, what if two small-town museums both had eyes on an antique that suited their collections? “It never came down to that,” Morgan says. “In fact, it was the complete opposite. If they were going through boxes and saw something that fit another group’s criteria, they’d take that over to them and have them sign for it.”

The two large temperature-controlled vaults in the Halifax region that once housed thousands of Tillmann’s items have since been emptied. Every item is gone. The rare Darwin book was returned to Mount Saint Vincent in late October, “the final piece of the puzzle for us,” says Morgan. “It was especially satisfying.”

As for Tillmann, who was sentenced in 2013 to a nine-year prison sentence, the next chapter of his life started on Nov. 23, when he was released on day parole. Living at a halfway house in Halifax, several restrictions have been imposed on him, including no unsupervised Internet access. Books will have to do.