Comparison shopping in Edmonton, the temporary pot capital of Canada

Somehow the city rang in Oct. 17 with more legal pot shops than any of its Canadian counterparts. We paid them all a visit. 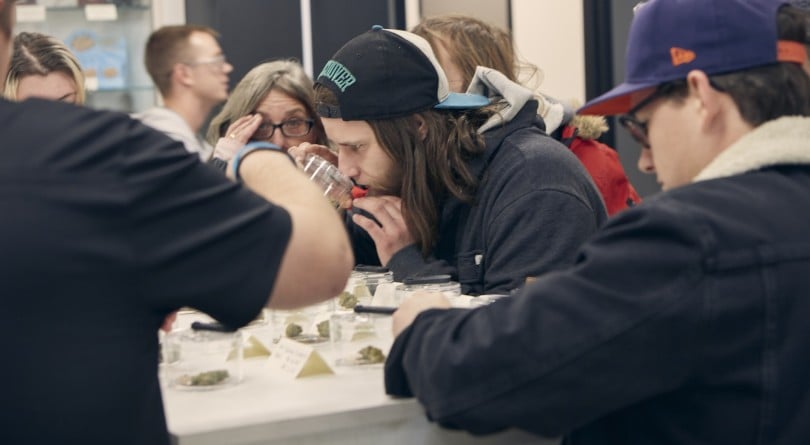 Scraps of notebook paper sat in a row on the central counter at Edmonton’s Numo Cannabis, each marked with a waiting customer’s bud order. It seemed an odd relic from the last time Prohibition ended—alcohol, nine decades ago—though it’s only because the 2018-era, state-of-the-art order system crapped out on Day 1. The clerks’ tablets weren’t connecting to the backroom product vault and registers when the store opened, so an employee rushed to the dollar store for notepads and pens.

And the glass for the wall display cases, which contractors weren’t ready to install until the momentous morning of Oct. 17—they didn’t fit on the cabinets. Those shelves lay barren, and product samples were instead stuffed into shelves within the main counter, beneath the makeshift note-taking order system.

Numo managers predicted each customer would take 10 minutes to file through the store; those who spent around an hour inside, after an interminable wait to reach the door, were among the lucky ones.

“As I’ve talked to customers, apologizing about the wait times, they’re okay with it,” says owner Daniel Nguyen, before begging off the interview to handle the next pot shopper.

Multi-hour lineups, four or longer, were standard at all of the cannabis stores open in Edmonton on Wednesday, whether their systems hummed along as planned or they had to kick it old-school. On Canada’s first day of legal cannabis, Alberta’s capital had the distinction of being the country’s retail weed capital—six stores, more than any other city. By quirk of how slowly or cautiously government processes have geared up elsewhere, six is more legal stores than Toronto (0), Ottawa (0), Vancouver (0), Calgary (2) and Montreal (3) combined. (In Newfoundland and Labrador, St. John’s punches well above its weight with five store in the city and eight in the region; Edmonton and its bedroom communities total 12.)

RELATED: The reason that cannabis is now legal in Canada

Maclean’s visited all six Edmonton stores on Wednesday, indulging in a kind of first-day comparison shopping that almost nobody would be able to do because of lineups. (While journalism comes with few perks, sometimes we get to queue-jump.) It provided a glimpse into the tough private retail competition to come as stores begin proliferating throughout the country —and notably, the difference between the independent shops and emerging corporate chains.

There were some commonalities among all the stores. They all must stock their shelves from the provincial distributor’s supply, sourced from a handful of licensed producers, so there’s heavily overlap in choice from shop to shop. The floors tended to be laminate brown or grey, and the staff T-shirts black with their names, mugshots and provincially approved cannabis worker numbers on badges around their necks. They were variously called “budtenders,” “cannistas” or (double yawn) “customer experience representatives.” 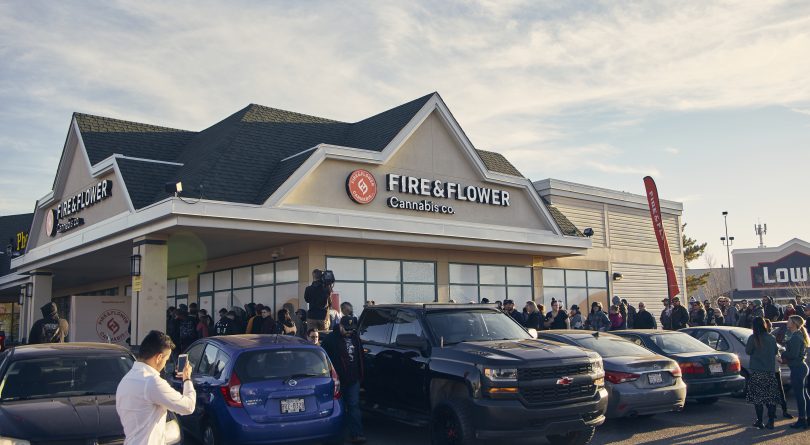 Numo and another of the small players, Alternative Greens, had temporary storefront signs on printed vinyl tarps. Fledgling chains Nova Cannabis and Fire and Flower Cannabis had permanent signs to greet customers, along with DJ booths or speaker systems blasting popular and/or pot-tinged songs (Beach Boys’ “Good Vibrations,” Arcade Fire’s “Everything Now”). If their interiors tended to look whitewashed and clean like Apple Stores, it’s partly because federal and provincial rules prohibit much product promotion and display of actual dried flower, unlike the baggies and big jars of bud at grey-market dispensaries. Cannabis is kept away from self-serve customers, locked in a rear vault; in a hybrid of video stores, the bygone Consumers Distributing outlets and the Ontario Beer Stores of past decades, customers had to either bring sample cards to the order counter or request wares at the cash register. Colorado, where recreational pot arrived in 2014, has to cope with similar rules.

“Everyone went down to the U.S. and looked at the same thing,” said David Gordey, chief financial officer at AlCanna, which owns Nova and Liquor Depot, an established giant of western Canada private alcohol retail. Staff at the chain shops roamed the floor with (functioning) tablets, while executives in blazers beamed about the long-awaited dawn of revenue–generating business. There were ample video and text displays about indica, sativa, THC content and aroma-producing terpenes. “What differentiates Fire and Flower is the educational focus,” said one store spokeswoman, fairly describing the competition as well. Fire and Flower did uniquely have the feel of an art gallery opening, with vivid paintings and photography on the walls. Everywhere, though, the dominant vibe was patience, for long snaking lines or for one’s order name to be yelled out.

More than 700 hundred private stores applied for licences Alberta, and the provincial regulator expects 250 to open in government-sanctioned cannabis’s first year. The first 17 that opened province-wide got out first by dint of speed of completing ownership background checks and inspections, and their distribution is far from geographically even.  The two in Calgary are a few blocks from each other, and there are more in smaller Medicine Hat, but none in the province’s northeast, northwest or central sections. Edmonton’s are clustered mainly in the north part of the city, and the Nova and Fire outlets are in the same suburban plaza complex, a few paces beyond the city-mandated 200 metre separation requirements from each other. Fire drew the bigger opening crowd with T-shirt giveaways for the lineup, but Nova has a different edge—a second store located near the city’s bustling Whyte Avenue that on opening day had the biggest blockbuster lineup.

Nova, along with Fire and Flower, are planning to have national reach; not so for their first-day rivals in Edmonton. Trevor Miller, a welder and pipefitter who once got fired from an industrial site for failing a drug test, is tremendously proud of what he’s done as owner of Alternative Greens, perched on a service road near the Yellowhead Highway. He sold out of pre-rolled joints by mid-afternoon; refill orders from the provincial distributor will take at least two weeks to arrive. The queue outside was so big it attracted a hot-dog stand, and customers gave him praise and happy back-pats as they left his smaller store. Two key shareholders—his sisters—surprised him at the store Wednesday with a gift. 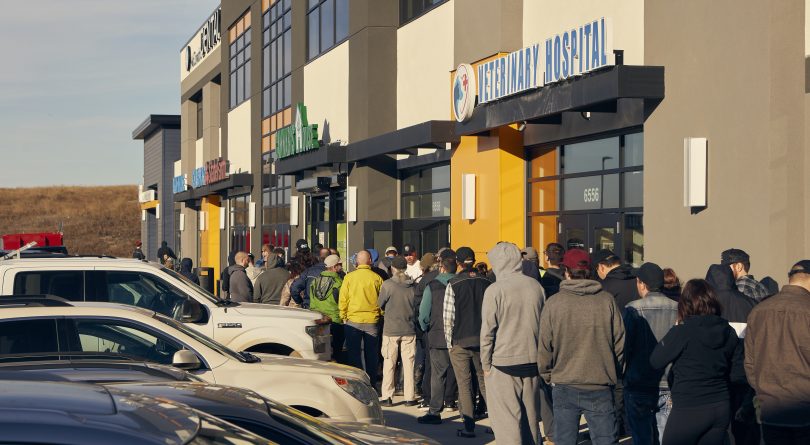 Alternative Greens doesn’t offer the sample smell jars like other stores; queued-up customers had to go by the video menus and price lists. The boxes and plastic jars of product (opaque, by government order) were the front-counter display cases, something officials at the bigger stores didn’t believe was permitted. But Miller says he got the okay from regulators, as long as everything was tucked in the vault at closing time, like at a jeweller. Most of his walls are spare, except for an exposed brick expanse with a colourful mural of a smoking woman. Surviving against the big players? “I’ll be fine. I got more knowledge than all them because I’ve done it all myself,” he says.

Cannabis House sits in a new suburban development in the city’s northeast corner, opposite Liquor House, owned by the same developer. Joe Dhami plans to open four Edmonton stores, but all managers from the yet-to-be-opened shops were on hand at this outlet to handle the first day’s traffic. They began letting the lineup trickle in a few minutes late, at 10:10 a.m., to give the electricians who had just finished work first crack at purchasing, and to hand-write price labels for the products.

RELATED: The grandfather who bought Canada’s first legal weed (near as anyone can tell)

Back at Numo, Nguyen’s store decoration consisted of novelty giant spliffs from a rolling-paper provider, and gift baskets from the 22-year-old entrepreneur’s family and friends. Staff ripped through the notepad paper quickly, and customers didn’t seem to mind the hiccups and waiting. They weren’t sure what the dawn of legal cannabis would look like; they were pleased to experience it at all. As the crowds waited outside along 95th Street, passing trucks and cars kept honking their support.

The lineups will die down once the novelty of Oct. 17 does; the few stores to get the initial traffic bump were the lucky ones. Dozens more will gradually open up throughout Alberta, B.C., Ontario and elsewhere long after the giant queues of the curious have dissipated; customers will get time to shop around, be dazzled by the features of the bigger stores or charmed by the mom-and-pops. Or they’ll return to the familiarity—and often better prices—of their normal dealers.