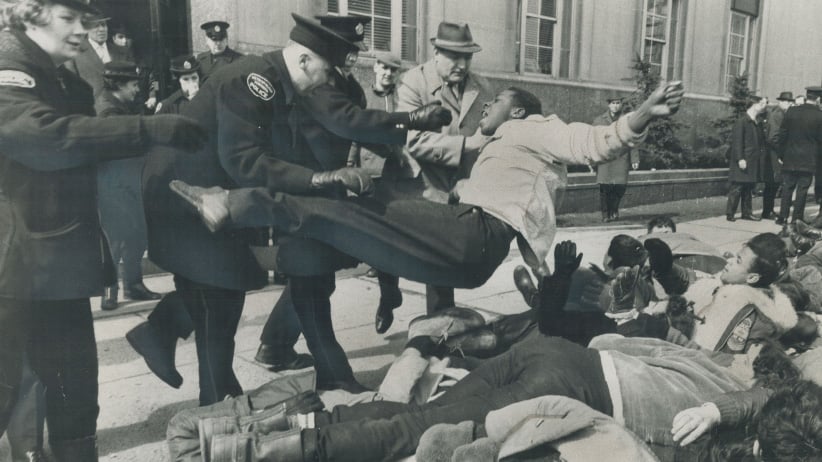 Police force a black youth to the ground. He was among about 80 student demonstrators who marched on the U.S. consulate on University Ave. to back civil rights workers in Alabama on March 16, 1966. (Gerry Barker/Toronto Star/Getty Images)

In the early 20th century, the Canadian Department of Immigration went to great lengths to dissuade Black Americans from immigrating to Canada. Working with doctors, they provided them with monetary rewards for turning Black migrants away at the border and mandated that these medical professionals inflict invasive and unnecessary examinations as deterrence from entering Canada. The government also sent doctors to Oklahoma and Kansas to spread propaganda to Black Americans around the unlivable weather conditions of Canada—some even going as far as telling Black men their daughters would be vulnerable to sexual abuse and exploitation.

This was done alongside two things: active courting of white settlers and a deep investment in the public appearance of a polite and welcoming neutrality, set apart from the outward race-based discrimination of the United States. This is just one of hundreds of seamless historical examples cited in the new book Policing Black Lives: State Violence in Canada From Slavery to the Present, written by Black feminist writer, activist and educator, Robyn Maynard.

Maynard plainly corrects and downright disrupts the friendly, welcoming and multicultural narrative on which Canada’s national identity relies. Her book examines anti-Black racism alongside every historical moment that Black people have been present in this country, starting from settler colonialism to present day. By characterizing Canadian nation-building as settler colonialism, Maynard effectively calls out the white theft of Indigenous land in the building of Canada and traces it through to a white-dominated hierarchy that exists to this day. It is grounded in the work of countless renowned Canadian anti-racist scholars and activists.

Maynard traces the 200 years of slavery in Canada, often erased or downplayed in the study of our history, noting the same dehumanizing and violent treatment of Black bodies we see in accounts of slavery in the U.S. Anti-Blackness through segregation characterized the post-slavery abolition period, an era often reimagined in Canada as purely positive.

Maynard recounts “Canada’s Jim Crow”, government-enforced racial segregation that had an impact on housing, employment, education and immigration for Black people in Canada. “Racial segregation—a form of violence in and of itself—entails the enforced (rather than voluntary) confinement of racialized populations to particular spaces (e.g. particular neighbourhoods, schools, public spaces, and businesses),” she writes. “The segregation of Blacks—which, like slavery, was a form of controlling Black movement and institutionalizing subordination—was based on the idea that Black people were both inferior and a danger to whites. Formally and informally, segregation was one of Canada’s foremost strategies for maintaining white dominance across all aspects of society after slavery’s end.”

Maynard describes her book as a broader intervention into a narrative of denial. In an interview, she is quick to point out that Policing Black Lives is not the first book to grapple with the history or contemporary fact of anti-Blackness in Canada. “One of the things I found the most intense to realize was how many interventions have been made both historically, if you look at the work of Charmaine Nelson or the more modern writings of Cecil Foster on anti-Blackness and immigration policies in the 1990s, to see how many times, especially Black writers, have been working so strongly to disrupt that narrative. It really does seem that it’s something foundational in Canadian history, to the present day—an embrace of this benevolent narrative of racial diversity and tolerance that has never been the case.”

I am very much interested in the strategic ways Canada positions itself on race and racism as neutral, accidental and generally nice. Maynard locates this characterization, calling it white benevolence: the avoidance of the appearance of racism and fear of mirroring the known race problems of the U.S. White benevolence brilliantly flushes out the colourblind, polite and neo-liberal image I recognize as part of our national identity.

I asked her about white benevolence as described in the book and how it was integral in building Canada and deeply influenced state policy. It actively oppressed Black Canadians and Black immigrants so comprehensively that it affected socioeconomic status and, of course, the fuelling of the fiction that Black bodies are criminal, in need of surveillance. Maynard elaborates, saying, “I think that it’s helpful for people to understand the ongoing and longstanding history of Canada engaging in this benevolent narrative, really that it dates back to the abolition of slavery and this whitewashing of our history … So what you have now is again the strengthening of that image and contrast between Canada and the United States that allows for the erasure of anti-Black policies that really harm Black folks and cause Black suffering.”

I spoke to Maynard about her choice to include the intersecting ways in which Black women are victims of anti-Blackness. She tells me that it was a must for this work. “It’s important we look at anti-Black racism in all of its gendered components as well, not only talking about the experiences of young Black men, because if we do so we are missing all the elements in which anti-Blackness exists in our society, and we are not going to be able to successfully challenge it unless we look at the intricacies of different people—and different people’s bodies actually experience that racism.”

While anti-Black racism remains understudied and under addressed in Canada, Policing Black Lives provides a solid foundation toward the ongoing, pressing activism that imagines a Canada that truly interrogates anti-Black racism.