'God made it so they would never have to be alone'

Krista and Tatiana Hogan are conjoined twins who have defied expectations

Twins Krista and Tatiana Hogan say with pride that they entered this world with cries and howls. They’ve watched many times the video of their birth—over nine years ago on Oct. 25, 2006. It was filmed by one of almost 20 staff of Vancouver’s B.C. Women’s Hospital and Health Centre crowded into the delivery theatre for the high-risk birth of two conjoined girls. The birth of craniopagus twins­­­—heads fused together, brains linked in otherworldly fashion—does not go unnoticed. Television satellite trucks were parked outside, a news release was issued: “The babies upon delivery,” it said, “were wiggly, vigorous and very vocal.”

As conjoined twins they will never go unnoticed. Privacy is something they haven’t known. It’s a luxury they can never know. Brain tissue links the thalamus of both girls to such an extent that they see from each other’s eyes, feel what the other feels, taste what the other eats, coordinate movements of arms and legs and, their mother Felicia Hogan is convinced, eavesdrop on each other’s thoughts. “Tatiana and Krista are just like every other child,” their Facebook page explains. “The only difference is that God made it so they would never have to be alone.”

Actually for Krista there was one terrifying exception. The girls were frolicking in a pool under the watchful eye of grandmother Louise McKay in late April 2015 when Tatiana had a major seizure. “During the whole seizure [Krista] was saying she couldn’t feel her sister, “says Louise. “My sissy is dead!” she’d cried. It was a sense of isolation Krista had never experienced. “It was really scary for her because she’s always had that connection,” says their mother. “It was so bad we almost lost the girls with that one.” Recovery was slow. There were medical tests in Vancouver and for a time a strong anti-seizure drug was added to other medications the girls take, including insulin for their type 1 diabetes. As a precaution the family pulled the twins from the remaining weeks of their Grade 3 class at Okanagan Landing Elementary in their hometown of Vernon, B.C.

Post-seizure, Hogan noticed changes in her girls’ level of connectivity. “The [shared] vision is still there, but the mental speaking to each other, sometimes you can see it and sometimes you can’t,” Hogan says. In the past the twins seemed able to silently trade thoughts at will, as if they had control of an intercom switch between their brains. “Now,” says Hogan, “it’s like it isn’t there sometimes.” Their shared taste sensations, however, seem more acute. “I like mac and cheese, and hotdogs and peanut butter toast,” says Krista. Unfortunately she also likes pickles and ketchup. “Yuck,” says Tatiana with a grimace. She almost gags when Krista munches on a pickle. “I usually eat it with ketchup,” Krista says with a conspiratorial grin. 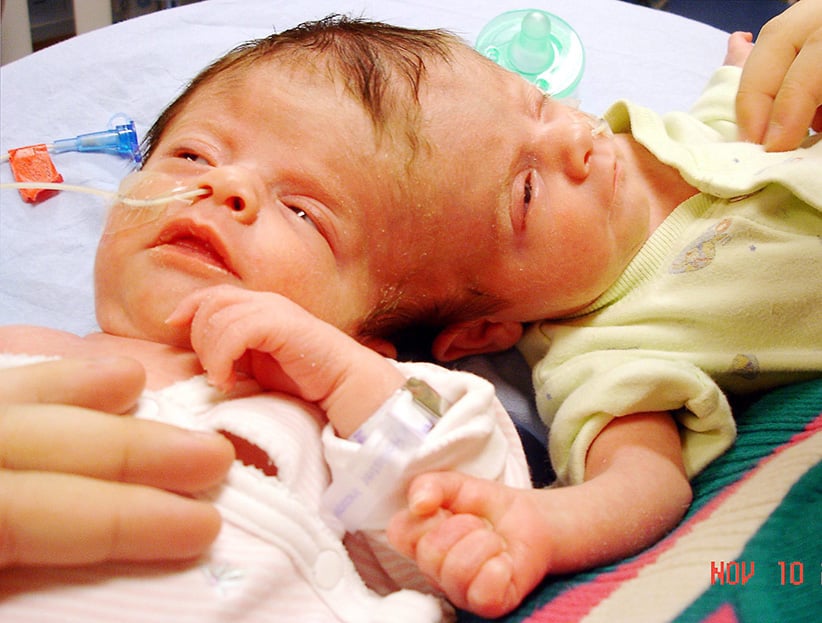 Their lives are an endless series of compromise, coordination and the odd confrontation. Time was the girls resolved their differences with their fingernails, leaving them both rather battered. Now, they’re inclined to pinch when things get out of hand. Krista is the physically stronger. Tatiana is the more intellectually dominant. Tatiana is also, both girls agree, a deadlier shot when they duel it out on video games.

The odd skirmish aside, for a Maclean’s writer who had tracked these girls since their birth, there’s a beauty and unity of purpose in all they do. The writer remembers health care workers who worried these newborns might never crawl, let alone walk. Yet he’s seen them through all those stages and how­—together—they run, jump, spin and tumble; playing with such abandon one almost fears they’ll split apart. Wiggly, vigorous and very vocal. They have distinct personalities to be sure, but they share a sunny, unselfconscious view of the world that comes from the certainty that their parents, brother, two sisters, grandparents and a whole unruly clan of cousins, aunts and uncles have surrounded them with unconditional love. — Ken MacQueen

FILED UNDER: Canada's Stories The Vault