Stephen Maher: Despite government policy, passengers landing over the weekend were not being adequately warned about the virus and the need to self isolate 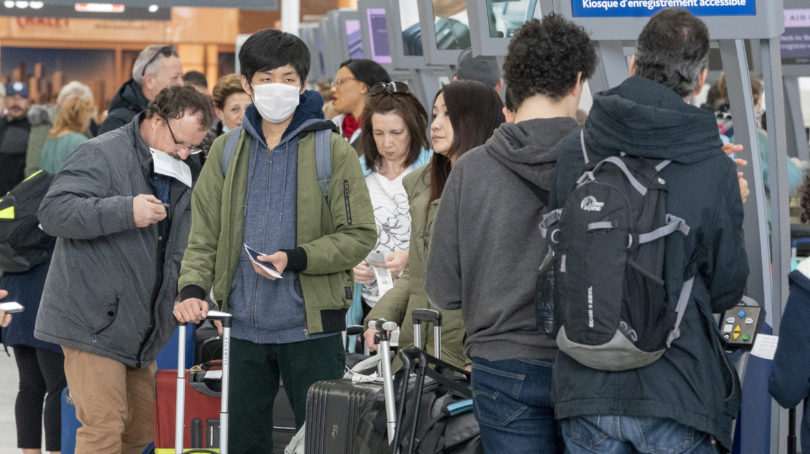 Passengers check in for their flights at Pearson Airport in Toronto on Friday, March 13, 2020. THE CANADIAN PRESS/Frank Gunn

The chief public health officer of Canada, Dr. Theresa Tam, wants me to tell you that if you have recently returned to Canada you should self isolate for 14 days to help prevent the spread of COVID-19.

Tam said at a news conference in Ottawa on Sunday that journalists should help get that message out.

“We are asking that all travellers that come back self isolate. This is not essentially ordered. This is a voluntary self isolation. It is impossible to keep tabs on every single traveller who comes in. This is a social phenomenon. This is a societal response and everybody must take that responsibility. Public Health is going to do what it can.”

Tam did not explain—and really it is not her job to do so—why Canada Border Services Agency officials do not seem to have been instructing travellers to do so when they arrived in a wave Saturday after the government urged travelling Canadians to put away their sunscreen and make for the airport.

“That is rapidly being implemented right now,” she said. “That is true. Very important.”

Public Safety Minister Bill Blair and the Canada Border Services Agency have not explained why travellers who arrived Saturday were not asked to self isolate, or why they had to wait for up to an hour in the Customs line at Pearson to be processed.

By Sunday morning, some travellers were receiving pamphlets with instructions. The pamphlet advises: “You are also asked to limit your contact with others for 14 days starting the day you began your journey to Canada.”

Thread. So there are plenty of examples that have been tweeted today that suggest what the government claims about their enhanced screening measures is incorrect. 1/#COVIDー19 #cdnpoli https://t.co/WKeqn9F4Qj

The pamphlet instructs travellers to contact “the public health agency in the province or territory where you live within 24 hours of arriving in Canada (see back of sheet).”

The back of the sheet is blank.

In other cities, however, travellers were still not being instructed on Sunday to self isolate. A traveller who landed at Vancouver airport received a pamphlet that only suggested monitoring for symptoms and avoiding places where the traveller “can’t easily separate yourself from others if you become ill.”

This does not seem to be as good as it could be.

Conservative health critic Matt Jeneroux said in an interview Sunday afternoon that it is discouraging to see the lag between the policy announcement and the rollout.

“It’s one thing to go and say, this is what we’re telling people to do, but then you have all these airports across the country where we’re hearing story after story that that’s not occurring,” he said. “So to stand up and announce the policy, it looks good and it tries to create some calm, but it does the opposite when people go to the airport and see that it’s not happening. So we’re critical right now as to what’s happening on the ground.”

On Sunday, given the federal failure to sufficiently warn incoming travellers, the government of Quebec sent public health officers to do so in that province.

Former Health Minister Jane Philpott, a medical doctor, says she expects officials are scrambling to make it happen on the ground.

“My expectation is that as we speak Canadian Border Service Agency and Public Health Agency of Canada are actively working on a plan to institute better messaging at airports and border crossings,” she said in an interview Sunday. “If we expect people to self-isolate for two weeks after international travel, we must assume that not everybody has picked up that message from media reports, and hopefully we will see dramatic scale-up of public messaging in the coming hours and days. This will of course require the appropriate increase in human resources so that it doesn’t inadvertently cause more problems by causing backups at airports that will put people in more high-risk zones.”

American airports were overwhelmed on Saturday when an enormous wave of passengers arrived as a result of Donald Trump’s travel ban, which left thousands standing in crowds for hours awaiting screening, which public health experts warned was creating ideal circumstances for transmission of the virus.

Jeneroux put out a statement Sunday calling on the government to implement enhanced screening.

“We’ve been calling for enhanced screening from the beginning … because it’s reasonable when you’re seeing people land—I think there was a flight land from Italy recently and nobody asked any questions.”

“There is not strong evidence of the role of screening using methods like temperature checks, for example. What really does need to happen at international entry points is strong public health messaging.”

Philpott said she thought the federal government is handling crisis communications relatively well, although she noted that different levels of government were giving Canadians different messages.

“I think it’s been relatively well-managed from a communications point of view in that regard,” she said. “Where people are getting a little bit confused is that there are continuously changing guidelines and multiple jurisdictions weighing in on what they are. So there’s obviously work to be done on that.”

She noted that Ottawa is not able to centrally gather information.

“There are challenges in our public health legislation associated with our federated model,” she said. “There is not the kind of public health legislation that one might want to have in these serious emergency situations. Hopefully, provinces and territories will be highly co-operative in terms of sharing data to overcome the fact the federal government doesn’t have the authority to compel the data gathering.”

Jeneroux agreed that overlapping jurisdictions present a challenge for managing this crisis.

“I don’t know what the solution to that is.”