Cover preview: Stepping into the den of Kevin O'Leary

Will he or won't he? And why would he? A sneak peek at our latest cover story, a profile of 'Mr. Wonderful' 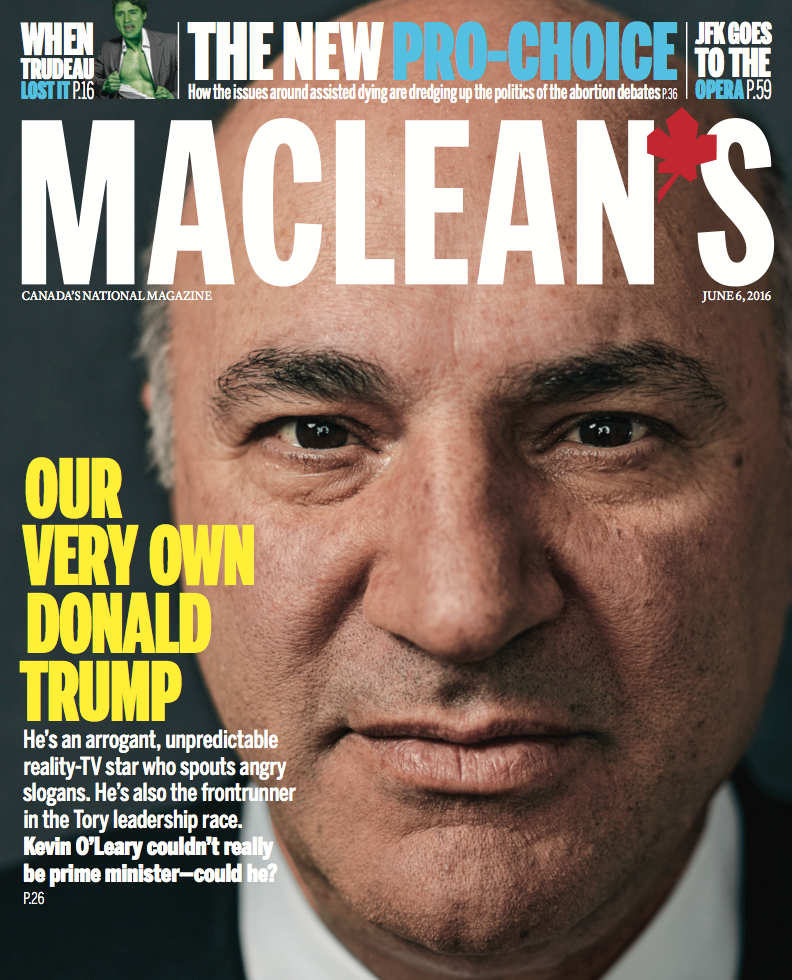 Canadians tend to think of Kevin O’Leary as one of our homegrown, quasi-celebrities; that loudmouth guy from CBC News Network and Dragons’ Den, and more recently, CTV News Channel. But O’Leary has become a bona fide American star since signing on as one of ABC’s “sharks” in 2009. The reality show, which lets struggling business people pitch ideas and inventions to a panel of rich investors, is a ratings champ, dominating its prime-time Friday night slot, and capturing close to 10 million viewers a week, once reruns are factored in. It has spawned a spin-off, Beyond the Tank. O’Leary also has a thrice-weekly gig as a business commentator on CNBC, and appears regularly on Good Morning America and CNN. He even has a dedicated segment on shopping channel QVC, Mr. Wonderful’s Wonderful Discoveries. A few weeks ago, he performed a marathon 12-hour stint hawking his O’Leary Fine Wines, made by a California vintner. The entire production order—294,000 bottles—sold out, grossing US$2.97 million.

Which is all to say that Kevin O’Leary seems a little too famous, too busy, and perhaps too entrepreneurial to even be considering a run for the leadership of the staid Conservative Party of Canada. Yet he’s more than happy to fuel such speculation. A January talk-radio tirade about Rachel Notley and the Alberta NDP—“She’s 1,000 feet underwater. She drowned six months ago. She’s a corpse. She’s incompetent,” he said—somehow morphed into a sure-I-can-do-better round of media interviews. O’Leary isn’t a member of the federal party, and he doesn’t have a team or a timeline. But he travelled to Ottawa in late February to suck up all the oxygen at a Tory gathering, and plans to do the same at the Conservative policy convention in Vancouver this weekend. Maybe it’s just the spillover effect from the unlikely political success of another U.S. reality-TV star, but an O’Leary candidacy can’t be dismissed out of hand. Opinion polls suggest he has better name recognition, and more support—27 per cent versus Peter MacKay’s 23 per cent in the latest Forum Research survey of likely Tory voters—than any other potential leader. “I think Canadians know me pretty well. Many don’t like me, but they trust me,” says O’Leary. “I don’t have to do things the traditional way.”

So the two big questions for Mr. Wonderful: Why even bother running? And will he?

Read Jonathon Gatehouse’s full story on O’Leary, and much more, in the latest issue of Maclean’s. Available now for tablet and mobile readers on our new Maclean’s app on Apple Newsstand and Google Play, on Texture by Next Issue, and soon on newsstands everywhere.